Over the past week, the country focused its attention on the happenings of the City of Boston. We watched the images of the blasts at the marathon, the scenes of police officers and EMS personnel helping those who were injured, and ultimately realizing that lives were taken because of such egregious violence against humanity. The City of Boston, the Commonwealth of Massachusetts, and the entire United States stand together and mourn the loss of those killed not only in the marathon tragedy, but also the security officer at M.I.T., who was killed by one of the suspects of the bombings. 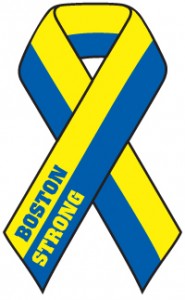 The unalienable right of one’s intrinsic security has been violated, leaving many on edge and nervous about the possibility of another attack.  Federal agents and Police knocked on doors, looking for suspects and warning the public of these fugitives. As a college student and living in a city, I cannot imagine what it is like to have such terror and fear in your neighborhood. No one should EVER have to fall victim to violence, whether it be gun violence, terroristic violence, etc. It does NOTHING to solve problems and puts innocent people at risk. Fortunately, the remaining suspect was caught and will be brought to full justice. But, a community is left to become acclimated with normal life again and move forward from a tense 24 hours.

As a St. Rose student, as well as a proud American, I stand with the countless others in support of Boston and remain confident and determined that peace and justice will be restored. Many of you may know that I am a big Yankees fan, and who would of thought in a million years I would be blogging about Boston. Remember, this isn’t about sport teams or alliances, it’s about your country and freedom. It’s about peace and justice, and it’s about supporting those going through tragic times. In fact, my New York Yankees even showed their support at their April 16th Game by playing Sweet Caroline, a traditional Red Sox Anthem. Watch it Here!

Today, as a Saint Rose community, take a moment to say a prayer for those who were killed or injured at the expense of nonsensical violence. The power of prayer can help overcome these atrocities. Many have also been looking for ways to give back and help. Below, I have posted some links to organizations that have been set up to assist the families affected by these tragedies. Of course, this not an “endorsement” from the college, but there is some good information for you to use and figure out how you can assist.

*Organizations in this post are not affiliated nor endorsements from The College of Saint Rose.*