Saint Rose professors teach without relying on teaching assistants. They lead small classes and make themselves available to support students individually. But professors across the College also work in their disciplines.

Their students benefit by moving beyond theory to get a first-hand account of what happens in their field on a given day. Practicing professors also assist students with their fieldwork – suggesting an approach to a challenge or whom to contact for assistance.
Another plus: Students can leverage their professors’ professional contacts to net valuable internships and job leads.

Here is a look at one professor’s current work: 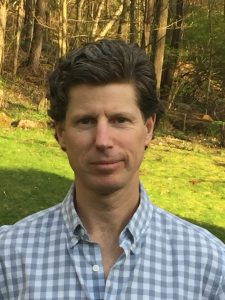 Expertise: His expertise is adolescent mental health. Hoff provides individual psychotherapy and consults with schools and agencies to develop and improve mental health services. He presents nationally on how to meet the needs of teens who injure themselves or are at risk for suicide.

Current project: He is developing a comprehensive mental health support system for a public school district.
The work: The national teen suicide crisis hit close to home for one public school district. In less than a year, several teens in the region, including a recent graduate of that district, had taken their own lives.

District leaders wanted to do more to respond. They turned to Hoff, who’d spent several years working with individual students as a consulting psychologist. Now, they retained him to build an entirely new system to support young people known to be struggling.

First, Hoff established a support team of administrators, teachers, counselors, and psychologists. People who had been in the same room numerous times now had the opportunity to share concerns about the well-being of particular students.

The district also established a wellness committee of middle and high school students nominated by staff and administrators. Among them was a young man who’d known a teen who died by suicide and was considered vulnerable.

“It wasn’t perfect. He had a lot of absences and family issues,” Hoff said. “But after joining the committee, he gradually started talking to other students about his challenges. Now he’s a senior, and while he’s stepped down from the committee, he is a stable and successful student.”

The high school introduced brief morning videos – “mental health moments.” Schools convened the entire student body to talk about stress and coping. They showed “Angst,” a film that explores anxiety, and followed with student-led discussion groups. “Instead of stigmatizing the mental issues,” Hoff explained, “the district put them right on the table.”

Next, he hopes to work with administrators, teachers and students on screening students for depression. Hoff also wants to extend some of the initiatives to the elementary level.

“Is this hard? Yes it’s hard. The issues are hard. It means we’re going to go in and be relentlessly positive,” he said. “I have had people say to me, ‘You’re looking at things with rose-colored glasses.’ But I say ‘I’m not seeing the world through rose-colored glasses. I’m seeing it the way you better see it if you want to see change.’’’

Already, he sees successes. The student recruited for the wellness committee surveyed high school and middle school students on what they find stressful and how they cope. The results were published in the school newspaper. Teachers are also taking note.

“An English teacher is teaching ‘Romeo and Juliet’ by introducing the concept of mental health,” he added. “What is the play about? Suicide brought on by loss. The teacher embraced the notion of bringing mental health topics to the classroom through the curriculum. And who is he teaching the lesson with? The school psychologist!”

Impact on students: “At Saint Rose I teach students about working with adolescents on mental health challenges. We have limited time. Three years. I can bring in the research, the articles and books, and I do that. But the thing I also do is bring in cases. My students say, ‘Hoff brings in real-world cases, and we love them.’ It makes learning come alive.”