by Alexander Lawrence on March 20, 2015 in All About Saint Rose, Golden Knight Spotlight · 0 Comments 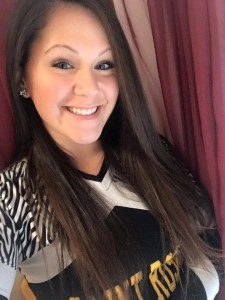 Most memorable moment or game: “Probably my sophomore year of high school. I moved up to Varsity cheer after football season. We went to a competition about a month after I had moved up. We competed at a state championship and won the state title in our division. “

Why SR Cheerleading: “I actually did not cheer my first year here because I was nervous about the experience. You have a bunch of girls coming from different high schools and different levels of ability. I thought it was going to be a negative experience. I regretted not cheering so I tried out my sophomore year. “ 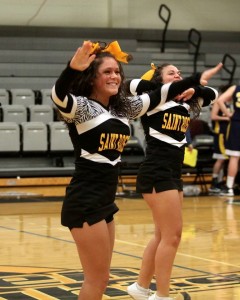 Sarah (left) doing what she loves.

My Comments/ takeaway from the interview: Sarah is a senior here at The College of Saint Rose and captain of the Saint Rose cheerleading team. Everything she does, she goes after it and gives it her all. She originally came here for just academics, but decided to get back into cheerleading. “A lot of us seniors were very versatile and were in a majority of the stunts, but I don’t think they’ll have a hard time figuring out what works next year without us. I feel confident about the team going forward because coach Kristyn (Constantino) does a great job picking a team that meshes and works well together,” DeFazio had to say on the state of the team going forward. “I think personally they bring out the funniest and most out-going side of me. A part of that is having a team you really connect and bond with. As a captain I have to be the one who provides the girls with positive feedback and helping them if I have the ability to,” DeFazio said. During my interview I felt an accomplished feeling when talking to her. She has put forth a tremendous amount of effort in helping out the team any way she can. She took on the role of being a motivator/team builder as her time is almost at a close. She really cares for this team. She is getting ready to graduate school and is going to do big things when she graduates this May. 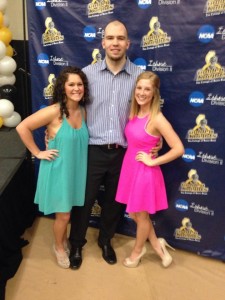