Two weeks ago, the Golden Knights men’s soccer team finished the fall season, their final record standing at 1-12 in the ultra-competitive men’s soccer NE-10 conference. On the face of it, the record was a disappointing one for a team who had high hopes for this season, but this was a far too familiar year for some members of the team who have experienced tough records in the past. As a freshman on the team, this was my first (and hopefully only) season of agonizing results with the Golden Knights. 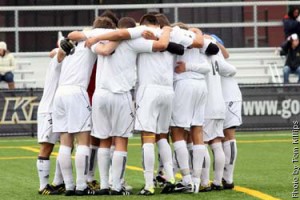 The men’s soccer team is a hard-working group of Americans accompanied by a large contingent of international athletes, captained this season by Alan McCann (Dublin, Ireland) and Dylan Klippenstein (Ontario, Canada).  The season began with an upbeat, enthusiastic attitude. Preseason during August was highly productive with the team arriving in excellent shape and the team moulding well together; there was a clear feeling in the team that this year was going to be a year of good results, which was supported by strong performances in scrimmages against UAlbany and Nyack. However once the season began, a sickeningly familiar pattern began to emerge in the team’s performances.

Time and time again the Golden Knights would outplay opponents, dominating possession and territory but would topple to one or two poor goals. Unlike football, basketball or volleyball, soccer has very low scoring which means that one simple mistake can often totally change the result of a game and the Saint Rose team was a victim of this on multiple occasions this season. For 90% of most games, the team would look impenetrable and then one or two mistakes would result in a goal (and win) to the other team.This problem became even more deadly when combined with the other issue the team had this year – scoring. For all the possession, territory and skill that the Saint Rose team had this year, they struggled to finish chances on goal. The issue in the group seemed to be that on both offense and defence, conviction was lacking. This is supported by the fact that some of the best team performances came against the better teams in the division, and the poorer performances against the worse colleges.

However there is definitely hope for seasons to come for the Golden Knights. First of all, many of the starters in the team are still young, with only five of the team leaving this year and a number of freshman being regular contributors to the game. It is also fair to say that I don’t think anyone in the team doesn’t believe that wins aren’t well within reach, in fact they are expected. On multiple occasions during the previous season the team was left feeling that they deserved more than a loss from the game. Player for player the team is stronger than a number of other groups in the division, now all they have to do is play with conviction and take what they deserve. This is, without a doubt, a team on the up, that will use the character and skill within the team to learn from last season’s mistakes and ensure a better record is achieved next year.

As a member of the team, I’d like to thank coaches Matt Jones, Stephen Hogan, Mark Quinn, Jason Ramundo and trainer Lisa Geiger for all the hard work they’ve put into the team as well as the Saint Rose Athletics Department, parents and supporters.