Good to know: 2015 Assembly intern’s unique perspective on upheaval in the Legislature

Alex Isham worked hard to move a bill he felt strongly about onto the floor of the New York State Assembly. The measure would force public officials convicted of a job-related felony to lose their pensions. Isham thoroughly researched the bill. He lobbied colleagues and lined up support.

But in the end he was unable to get the measure onto a committee agenda, meaning no debate and no vote this time on the bill known as A377A.

“It was a good lesson for me about the reality of the political process,” said Isham, who explained that there were several competing pension forfeiture measures, spurred by Governor Andrew Cuomo’s call for ethics reform. “But I cannot really comment on much because I have a responsibility to keep things confidential in my office.” 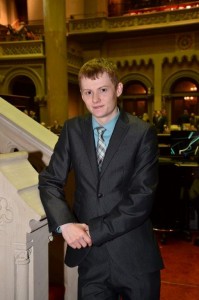 Alex Isham ’15 was certainly surprised by the arrests of the leaders of both houses of the New York State Legislature. But he maintains a positive view overall of the public servants he has encountered as an intern in the New York State Assembly.

Isham sounds very much like a New York lawmaker, though he is really a Saint Rose political science major acting as an Assembly member in his role as Assembly intern. During the six-month legislative session, it is normal for the 144 college interns from across the state to live in sort of a parallel universe to the lawmakers they are assigned to work for. So when Assembly member David Buchwald, a Westchester County Democrat, sponsored a pension forfeiture measure, Isham, his intern, became immersed in trying to get it passed.

A Vermont native who got hooked on history and political science in high school, Isham came to Saint Rose because of its small class sizes and location in a state capital. When he heard about the full-time Assembly internship, he jumped.

From January through the end of the session in June, interns shadow Assembly members, staff their offices and attend a weekly seminar with the Assembly’s professor-in-residence, Angela Ledford, who is also a Saint Rose professor of political science.

This year, it is safe to say, interns got more than they bargained for.

Two weeks in, Isham was riding the bus to his Assembly office when he read that the longtime speaker, Sheldon Silver, had been arrested on corruption charges. “I said, ‘this is going to be an interesting day,’” he noted.

Next, interns heard the scuttlebutt about whether Silver would stand or whether Assembly members would press him to quit the leadership. Isham read in the Wall Street Journal that his own boss, Assembly member Buchwald, would no longer back Silver. When the speaker did step down, prospective successors came forward. Among them was Majority Leader Joseph Morelle, who eventually stepped aside so Carl Heastie could become speaker.

“Morelle was one of the guests in our seminar,” Isham said. “When someone asked why he dropped out, he explained that Heastie asked for his support and they didn’t want to split the conference.” 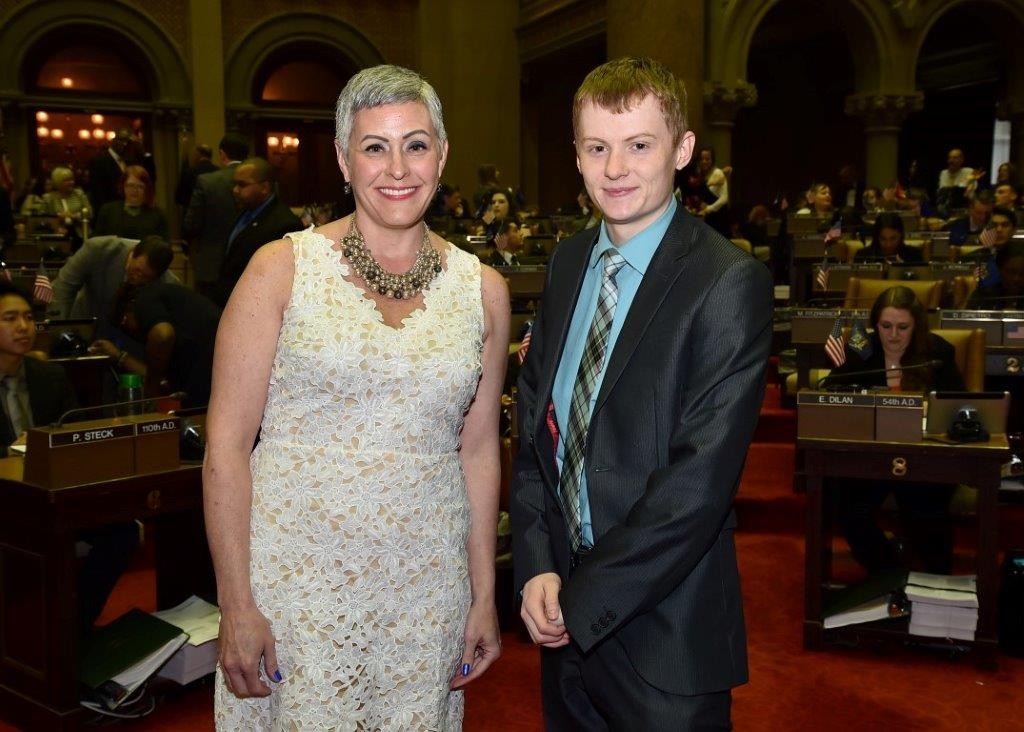 Gaveling in: Angela Ledford, a Saint Rose professor of political science, is also the professor-in-residence for the state Assembly. Here, she and Assembly intern Alex Isham ’15 prepare for the recent mock Assembly session.

Professor Ledford, a scholar of democratic theory, said the interns were able to observe not just a scandal but a system able to right itself.

“There was upheaval and a period of instability,” Ledford noted. “Then, the elected representatives went back to a pattern of doing the business of the state. The students got a unique experience. They got to see the dynamic equilibrium that played out.”

Near the end of the session, Isham focused on a research paper devoted to A3773, the pension forfeiture bill. He prepared arguments in support of the measure that he wished to bring to the Assembly floor during a mock Assembly session. But Republicans, the opposing party, exercised their right to set the bill aside.

“While I was sad that I could not speak, again, it is another good lesson about the reality of the process,” Isham said.

“The internship has fed my want to run for public office, and Assembly member Buchwald has shown me how to run a successful office, no matter how small,” Isham said, referring to the lawmaker he works for.

Every year, Saint Rose students distinguish themselves in internships in both the Assembly and in the Senate, just two miles from campus. They are frequently hired by the lawmakers they report to or to work in offices elsewhere in the Legislature.

“You work your tail off as an intern and word gets around about your work,” said Jermaine Brookshire, Jr. ’13, an analyst for the Assembly program and counsel committee who served as an intern in the state Senate. “The internship really helped and I continue to wear my Saint Rose tie clip with pride.”

Isham has learned how important staff members are — even speaking for the Assembly members in some cases. He also saw that lawmaking tends to be reactive, rather than proactive. The Silver scandal, he noted, brought a flurry of bills on ethics reform.

The newly minted graduate said he remains upbeat about the system of lawmaking – even though near the end of the session the state Senate’s leader, Dean Skelos, was also arrested on corruption charges and forced to step down.

Isham, in fact, was struck by the many lawmakers who went out of their way not to be compromised, turning down gifts as small as a bag of potato chips.

“An ALS group delivered Lou Gehrig bobbleheads to the members with a note asking for support in ALS research,” he noted. “Many Assembly members, and senators, actually contacted the Legislative Ethics Commission to have the bobbleheads removed, because those did in fact violate the ‘gift’ policy.

“Some bad apples have gotten into the system, for sure,” he said. “But there are plenty of great and dedicated politicians here in the Capitol who would do anything for their constituents.”

← Until Next Time: The Conclusion & Reflection of Studying Abroad
We have arrived! →