Good to know: Getting beyond the mystery of mystics

When devout individuals connect so closely with God that they achieve a mystical union, scholars look at how that experience compares to those of mystics across eras and faiths.

“Mysticism is pretty universal. Getting in touch with God is universal,” said Dan Haglund, a Saint Rose religious studies major who has devoted his summer to the topic using a College-funded research grant. “We can look at how what a Catholic mystic says compares to what a Jewish mystic says. This broadens the dialogue between traditions.” 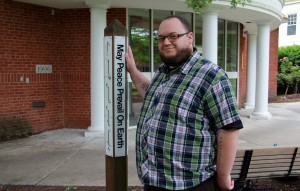 We are more alike than we realize: The peace pole outside the Hubbard Interfaith Sanctuary reflects the lesson religious studies major Dan Haglund is learning as he compares and contrasts the experiences of two mystics of two different faiths who lived 400 years apart. Haglund is among the Saint Rose undergraduates who has devoted his summer to original research using College-funded grants.

Last fall, Haglund took part in an independent study of Catholic mystics. With the summer grant, he went further, comparing the experience of an Islamic mystic from the eighth century to that of a Catholic mystic who lived 400 years later. Not only does Haglund’s examination cross religions, geography and centuries – it is also distinctive because the subjects were revered women, Rabi’ah al-‘Adawiyah and Julian of Norwich. 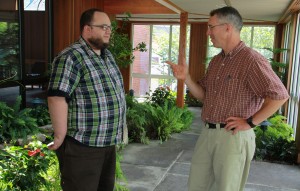 Now, Professor Jeffrey Marlett can learn more about the topic of mysticism from a student, Dan Haglund, thanks to Haglund’s focused summer research. They hope to publish Haglund’s detailed paper.

“Classes in Christian and Islamic mysticism are common at universities,” noted Jeffrey Marlett, the professor of religious studies who is Haglund’s advisor. “But he has a chance to compare mystical styles of two women of two religions. That takes a lot of time and it hasn’t been done very much. It’s complex, it’s elusive, and involves two traditions.”

Haglund did an extensive study of the lives, religions and writing of Rabi’, an Islamic mystic from Basra, and Julian, a Catholic mystic who lived in England, to see whether they followed a similar process. In his 24-page paper, which he hopes to publish, he identified many common variables despite the vast differences in their belief systems. His paper also highlights the prominent role the women played in their male-dominated religions.

Haglund is one of seven Saint Rose undergraduates awarded summer grants. He said the experience only made him want to continue the work and pursue his studies in graduate school.

“The summer research allowed me to do what I wanted without restrictions because I didn’t have any other classes,” he said. “For six weeks I could think about it all the time.” 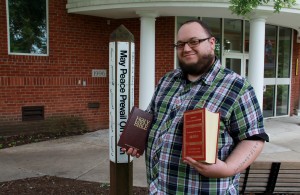 1 comment for “Good to know: Getting beyond the mystery of mystics”