Once Upon an Invitational…

by Michelle Flores on December 4, 2012 in The College of Saint Rose · 0 Comments

On December 1st, the Girls Next Door hosted their second annual winter a capella invitational, held in the Massry Center for the Arts.  The Girls Next Door (GND) is the only all-female a Capella group on the Saint Rose campus. The group has been recognized by the International Championship of A Capella (ICCA) for the second year. Last year GND made it to the quarter finals of the ICCA competition.

The Invitational featured a Capella groups from various NY colleges, including Hofstra University’s Dutchmen, SUNY Albany’s Serendipity, SUNY Oneonta’s Hooked on Tonics,  Binghamton University’s Binghamton Crosby’s, and The College of Saint Rose’s Girls Next Door.  The fairy tale theme of the invitational provided a magical experience.  The event was hosted by Tinamarie Stolz and Alex Kouloriotis , who put on an unforgettable act as granddaughter and grandmother just trying to get through story time. 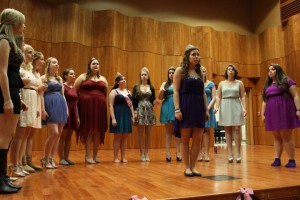 Each group that preformed was amazingly talented in their own ways. The Dutchmen, an all-male group from Hofstra University, interacted with the crowd and were good-spirited making each song enjoyable. Serendipity, an all-female group from SUNY Albany, had great harmonizing talent throughout their performance. SUNY Oneonta’s mixed group had powerful vocals, a jamming beat boxer and complete ease when performing on stage. The Binghamton Crosby’s were stylish in their blazers, and incorporated fun choreography into their performance. The College of Saint Rose’s own Girls Next Door, dressed as princesses, performed last closing the event with a variety of old and new song; the girls saved an energetic piece for their standing ovation song after the crowd chanted “One more song.”