by Michael Aurrichio on December 15, 2014 in All About Saint Rose · 0 Comments

Within my family and friends, I’ve always been the kid with two definitive traits; one being the “really skinny” kid. The other trait I’ve always possessed is that I am always willing to try something new. You could ask any one of my suitemates or my friends if this is true, they know I have zero shame or fear, which could be an interesting story for another day but I digress.

This year, one door was unexpectedly opened for me. I am a member of the SEB (Student Events Board) Musical Entertainment committee led by the lovely Rebecca Moyer. One night, I went over to St. Joe’s Hall to help set up for the event that would later occur, which happened to be Musical Mayhem, which is a Jeopardy-style, game show-based event.

As everyone is helping to set up, Rebecca looks over at me and says, “Do you want to help Diana host this? I think you’d be good at this.” Now, at first you could probably imagine where my head was at. Keep in mind, this was about an hour or so before the start of the event. I was nervous, even a little reluctant, but I had a feeling I would not regret doing this. I had a feeling this could be good for me.

Quick side note for those don’t know me on a personal level: I am VERY impulsive and will often act on emotions and feelings. All these positive vibes actually wiped away the nervousness for the time being and I accepted. Prior to this moment, I cannot recall a moment where I had an opportunity to hold a microphone before, so that in itself was really cool to me. It’s the really the little things that give me amusement and entertainment.

As the event went on, I just felt more and more comfortable with hosting events. Once Musical Mayhem came to a close, I was more than satisfied knowing that I did not do bad a job and I don’t know why, but I had a feeling this would not be the last time I would have an opportunity to be on the stage.

From then, I was just waiting for another opportunity. Well, thankfully, that opportunity presented itself. I ended up hosting “Strose Idol”, which was a singing competition that was based like, you guessed it, American Idol. Strose Idol was such a fun event to host. I had the pleasure to see how talented some of my peers are, which absolutely blew me away. I’m not even sort of musically inclined, so to see other people who can actually sing, I don’t know, man. It blows my mind.

The third event that I hosted was the biggest event I’ve hosted thus far. I say “thus far” because I’m hoping to host Rose Rock one day (please help). The third event I hosted was the Saint Rose Music Awards (SMAs). Now, this was an event I was really hoping would fall into my lap. At first, I was in the running to be a host but unfortunately I didn’t get it. I was actually on the committee for the SMAs, so I was just happy to be involved.

The day of the SMAs finally came and I received an email from Priscilla, who was in charge of the SMA committee. I was actually giving a tour when I received the email. “The two original hosts are sick and won’t be able to MC for tonight. Would you be interested in collaborating with a Crate of Apes (improv group on campus) member in hosting?” I could only think to respond with one word, “Absolutely.”

This was probably the first time I was visibly shaken from nervousness. Those who know me will probably back me up when I say that pressure has never really affected me. I’ve been playing sports all my life so pressure was nothing new. This time however was not the same. I was actually freaking out. Not like, “Ah I’m so nervous,” it was more like, “OH MY GOD PLEASE SEND HELP.” I might be a little over dramatic sometimes…

Why was I nervous? This was what I wanted from the start. Minutes before the event started, you could find me backstage pacing back and forth until I got to pace onto the stage. Once those curtains opened up, I looked everywhere, heard some cheers and suddenly I was okay. I just needed a little boost to maintain a comfortable composure. This was the biggest event I hosted to date and I like to think that I did alright. 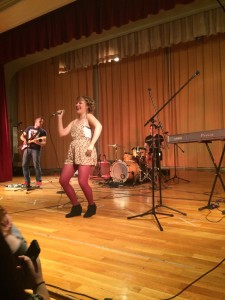 The most recent event I hosted was the Make The Change: Benefit Concert. This was an event that I knew had deeper meaning than I could truly comprehend. How did I get involved with this event? Well, I was sitting at dinner when my friend KT looked at me and says, “Mike, I have to ask you something.” Immediately, I’m trying to think of what I might have done wrong. That’s when she asked me to host this event and honestly, I was honored and even humbled. This wasn’t an ordinary event. This was an event that could truly make a difference, which is all I’ve wanted to do– make a difference.

This benefit concert truly opened my eyes to a whole lot of things I never really put into perspective. I finally realized what the term “interfaith” meant. I saw how much this meant to everyone involved. This was easily the most eye-opening event I have ever been part of and I actually learned a lot. Being an education major, you can imagine how thrilled I was to learn something, especially of such importance.

I just want to give a quick shout-out to my friends who have been at every event that I’ve hosted thus far. They have been so supportive and have been my biggest fans. I couldn’t do it all without them, so thank you guys. I love you all.