They Built This City on Logs and Gold 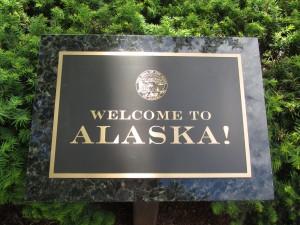 The area around the Gastineau Channel was originally fishing grounds for local Tlingit Indians. In the late 1800s, the area became a focus of attention when Kawa.ée (or Kowee) of the Auk Tlingit tribe provided gold samples in response to a reward by George Pitz, Sitka Engineer. Kawa.ée led Richard Harris and Joseph Juneau (name sound familiar?) to discover quartz and gold in the Silver Bow Basin on October 3, 1880. On October 18—a day now known as ‘Alaska Day’—a 160-acre town site was blocked out on the beach. This new mining district was named Harrisburgh, which was later renamed Juneau.

Mining obviously played and still plays a large role in Juneau. However, I want to share some facts about the timber industry, as well. All of the significant mines in the region logged at least one hillside to provide the necessary wood for the mine in the past. With so many trees about, and the Tongass National Forest encompassing more than 90% of timberlands in Southeast Alaska, according to the Alaska Forest Association, one could not say that Juneauites were ever in shortage of lumber. Every morning when I walk into the museum, I get to see a cityscape photo of Juneau from 1916. If one looks carefully at the picture, he or she will find that the streets are planked with wood, instead of laid with bricks!

Now, why is all of this relevant?

Two weekends ago, I went out to Savikko Park on Douglas Island to spectate the annual Gold Rush Celebration Days!  Gold Rush Days are comprised of mining and logging competitions span out over the course of a weekend, along with various booths set up by vendors selling food and offering activities for children. On Saturday, I was able to witness people from the area come and compete in various mining events such as jackleg drilling, spike drilling, and hand mucking. On the following day, I returned to the park to find it filled with many more people watching the logging events. Some of the favorites during the day were speed climbing and log rolling, along with the Miners vs. Loggers Tug of War closing out the weekend’s festivities. 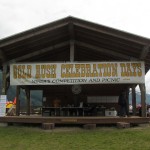 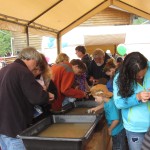 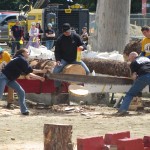 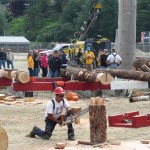 “Animal” showing off his furniture-making finesse with the chainsaw 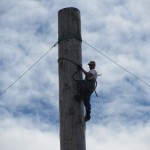 It only took him 34-seconds to get up there! 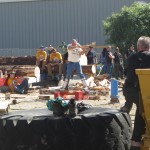 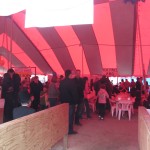 Did I mention they had food? 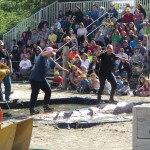 It was pretty spiffy to see so many display their skills for the public and take pride in what has played an important role in Juneau’s history and culture.

← Useful info: How to sign up for the Saint Rose RAVE alert system
It’s All Elementary, My Dear Readers →

6 comments for “They Built This City on Logs and Gold”