Turning on the news or hearing from a friend that a forecast of snow has been made is the greatest thing that anyone in school will ever hear. I almost feel sorry for students that go to school in a climate that does not accommodate snow, for they will never know what it feels like to hear the magical words of “an estimated 2-4 inches will make driving conditions slick.” To these unfortunate students, that sentence sounds like any other but to us, the northern east-coasters, this sentence brings hope for no alarms or assignments due. 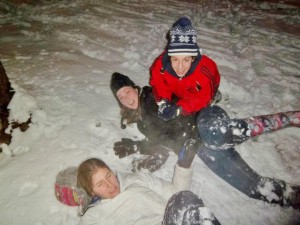 A classic throwback to freshman year with Kyra and Maggie

I suppose when you grow older you should stop getting so excited about the chance of college being canceled, but I am almost ashamed to admit that it gets more exciting. Maybe this is because in college the stakes are higher and there is more to celebrate when classes do get cancelled because, sadly, it doesn’t happen as much as it used to. Despite this fact that classes are almost always still on, students like myself will insist on not doing assignments because if they actually complete the assignment it may “jinx” it and school won’t get cancelled.

This was logic I applied to a presentation that I was assigned to present on Monday and had known about for a good month. Being the greatest procrastinator ever I opted to leave the preparation work for the project until the weekend before. Normally I would get the work done without a problem, as I am a journalism major and work best under pressure; but when I heard that forecast I abandoned my work schedule. I  cast my work to the side, watched some Netflix and planned what I thought would be the perfect snow day. As I woke up to the sound of my alarm the next morning and looked out the window, my dreams were crushed as I feared they would be and I realized I had an hour until I was to present. Thankfully the night before I decided that I should have a back up plan just in case school wasn’t cancelled and scheduled my alarm earlier than I normally would (maybe the back up plan jinxed it…). This allowed me enough time to get dressed and write a presentation for my 7:30am class that, in my eyes, was still supposed to be cancelled.

Long story short, I wore my snow boots to class with my pencil skirt (in defiance) and still managed to get an A on the presentation. It doesn’t matter if you are nine or 20 – the hope and excitement of a snow storm forecast will always be one of the greatest things. 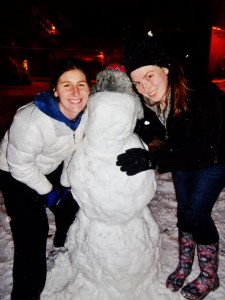 ← Snapped @ St.Rose: Holiday Edition!
Student Teaching from the Student’s POV: A Thank You to Teachers →