A Day in the Life of a Translator

by Jane Gottlieb on November 26, 2018 in All About Saint Rose, Faculty, The College of Saint Rose · 0 Comments 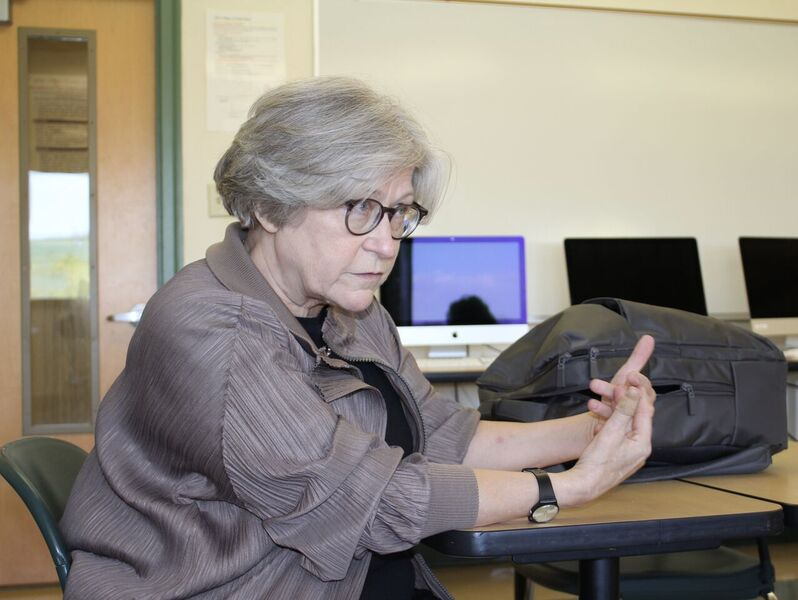 It’s Not Just About the Words

Bags of bird seed from China, intended for Western consumers, were labeled “brid.”  Packages of garlic from Israel displayed a picture of ginger root. A liquor store awning in France boasted this: “Stranger Wine.”

“They are trying to sound sophisticated,” explained Christine Durban, a respected French-English translator who shared a good number of linguistic slipups during a recent visit to Saint Rose classes. “They literally translated ‘etranger,’ which can mean ‘from another country,’ but it sounds just strange.”

Demand is high for English language translators to subtitle Netflix movies, interpret at court proceedings, label food packages and medical supplies, and help multinational corporations hit their PowerPoint presentations out of the park. The U.S. Bureau of Labor Statistics projects jobs for translators and interpreters (who work with the spoken word) will have grown 29 percent from 2014 to 2024.

For companies and organizations worldwide, getting the English right means the difference between success and, well, looking strange. And as world markets interconnect, it also means keeping consumers safe through clear and accurate labels and signs.

Saint Rose is responding to demand, offering a Certificate in Spanish < > English Translation – to train those with strong linguistic skills to translate to and from both languages.

Students pursuing the certificate have opportunities to translate in community settings. They translate and proofread general and specialized texts and use advanced technology, including subtitling and dubbing videos.  Earning the certificate prepares them to become a professional translator, a community interpreter, or both. They are able to do so while leveraging their majors across the disciplines. And, with additional training, they may also become court or medical interpreters.

“Most degree programs are offered only at the graduate level, and the majority of those programs are very theoretical in nature,” said Claire Ziamandanis, a professor of Spanish certified by the American Translators Association, who teaches in the translation program. “Those are great options for someone who wants to teach translation, but not necessarily for someone who wants to be a practitioner.

“Our certificate will provide documented credentials, so that our graduates can begin working in the field immediately,” she added.

On the day of Durban’s visit to several Spanish-English translation classes at Saint Rose, Durban  told the students that people in her field tend to employ similar skills, regardless of the country they work in. And more often than not, she added, the job is rooted in a deep appreciation for the language they grew up speaking.

“You certainly have to be really good in your foreign language but, curiously, you need to be really strong in your native language,” said Durban, who makes presentations worldwide. “I don’t translate words. I translate ideas. I am paid to figure out what the right message is.” 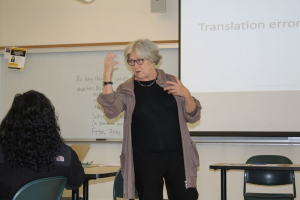 A Voorheesville native, Durban lives in Paris and translates for large companies that wish to draw investors and generate jobs. Her assignments range from months-long multi-platform campaigns to a quick turnaround of materials. Regardless of the scope, she said the challenge often involves parsing just a few words.

“As a linguist, you’re definitely looking at things more carefully than 99 percent of people,” she said. “But it’s the nitpicky part that makes it exciting.”

Often, she sees English-language errors generated by individuals like the French liquor store owner, who don’t speak English. Or, they happen when translation is done in haste, as with a character in a film whose line was subtitled “I come baring gifts.”

More tricky, and intriguing, are English-language translations that are not incorrect per se, but not exactly right.

To demonstrate, Durban turned to a project she did for a large transit client. A video showed images that communicated speed and efficiency. Then, she asked students to comment on the text labels, which were in English. Some simply struck the wrong note.

One slide read “Every Day We Welcome In Stations 10 million visitors,” which students changed to “Every day, we welcome 10 million visitors.” The class suggested changing “Whenever you need it; Both near or much farther afield” (the train was racing through a field) to “Both near and far.” Students also decided a “fluid” journey would better be described as “seamless.”  “Goods,” which could have brought up a feeling of good and bad, was changed to “freight.”

“The takeaway is that it’s not about Spanish or French,” Durban said. “It’s about really using language and talking to clients and leaving them in a place where the language they use has impact.”

← How Do I Tell My Friends and Family I’m Too Busy with Grad School to Hang Out?
Saint Rose Studies Abroad: Italy Edition →