A nail gun, a shovel, and memories made: New Orleans 2014

The following is a guest post from two students that traveled to New Orleans on their 2014 alternative spring break. Drew Mancini ’16, communication sciences and disorders (CSD) major, writes in regular font. Meghan Mallon ’17, music education major, is in italics. A total of 13 students participated in the NOLA trip and they volunteered with lowernine.org rebuilding the community of the Lower Ninth Ward.

When asked the question “How was New Orleans?” I ponder my amazing week and have a hard time putting my experiences and feelings into words. Over spring break, I took a step outside of my comfort zone and went on the alternative spring break trip sponsored by The College of Saint Rose. When I arrived at the first meeting in January, I was devastated to see that everyone going on the trip had a friend to converse with and sit next to. I immediately began to regret my decision and considered calling the trip off.  However, my gut told me to stick with the trip and I am grateful I did.

“Here baby girl! Why don’t you give it a try!” Mr. Joseph said as he dropped the ten-pound nail gun into my girly little arms. “What?! I can’t use this!” I said trying to hand it back to him. “Sure you can, baby girl!”

Errol Joseph is a big black man with salt and pepper hair who has lived in the Lower Ninth Ward of New Orleans, Louisiana for decades. Although he is a licensed contractor, he is still without a home nine years after his house was destroyed by hurricane Katrina. 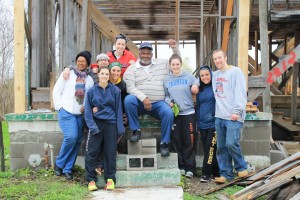 The week consisted of strenuous, humbling work. The kind of work that you can see progress in, and be proud of the results. When moral was low and times seemed tough, the positive attitudes of the team and the homeowners helped us to persevere and push ourselves. We all surprised ourselves with how much we were able to accomplish physically and mentally.

“Go on,” he encourages me, “just press it up on the wood and pull the trigger.” This kind of trust with using power tools is very new to me considering I came from a family who wouldn’t let me use the apple cutter. I pressed the gun against the board gently. “SHOOT ‘EM!” Errol yelled. I pulled the trigger with all my strength. BAM! BAM! BAM! The force of the gun jerked me back. I accidentally shot three. “Wooo! Baby girl ain’t nobody gonna mess with you no more!” I smiled. I have to admit I felt pretty powerful. I continued to shoot the nails into the boards until I finished the row. When I shot the last nail of the row, I took a step back to look at the whole frame. This frame was going to be a wall in Errol’s house…and I helped build it. 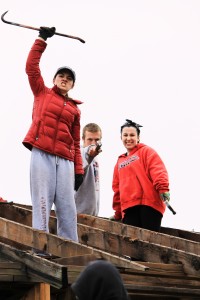 Meghan (left) with two other students on top of Errol’s roof. Throughout the week students worked to remove rotten boards to rebuild the frame of the home.

My week in New Orleans was life changing. Being exposed to completely new culture, new people, and new places helped to expand my insight and my perspective. The biggest shock I experienced was to see how devastated the Lower Ninth Ward still looked from hurricane Katrina, almost nine years after the storm made landfall. I set out, with my new group of forever friends, to rebuild the Lower Ninth Ward. Our goal was to help make a difference in a place that seemed forgotten about; little did we know how much this devastated and dilapidated town would impact us. Working alongside the homeowners and hearing their stories of how Hurricane Katrina devastated their homes and families changed my life. Despite all of their hardships, the people of New Orleans were positive and hopeful. The NOLA trip truly taught me to see the positive side in any situation. 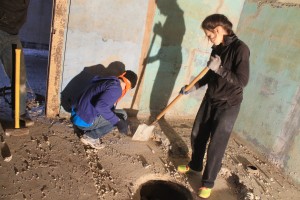 Drew (left) and and another student work on clearing debris to pour new cement onto the floor of a future grocery store.

The bond that the group had on and off the work sites made me feel like I had known everyone for years. It’s amazing what a couple long days of hard work and sharing tight quarters does to a group of people. By the end of the week we were all crying and hugging that we would miss each other, until we realized that we all go to the same college and live within a hundred yards of each other. So far we have not let the bond die since we’ve been back at school.

The relationships we build and the community we fostered in New Orleans will be something I can carry with me through my remaining time at Saint Rose. If you have a sliver of motivation to go on the next alternative spring break trip  (I sincerely hope there is after reading this post), I strongly suggest seizing the experience. 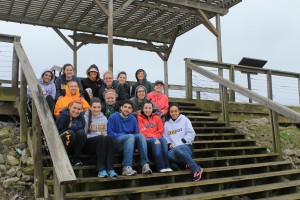 The group on their last full day in New Orleans.

“If you get a chance, take it. If it changes your life, let it. Nobody said it would be easy. They just promised it would be worth it.” ~Grey’s Anatomy

“The best way to find yourself is to lose yourself in the service of others.” ~Mahatma Gandhi