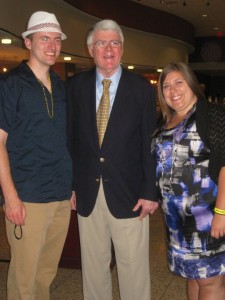 Myself, along with Dr. Sullivan and Deb Bengis at last year's reunion weekend

I always met the end of the semester with a mixture of sadness and excitement.  I was sad because I would stop seeing my friends every day and excited because I could finally get a break (and sleep…which was a rare commodity during finals).  I also took the time to reminisce with my friends about our successes.   While everyone celebrates their high moments, few take the time to reflect on their failures.

I am not saying you should dwell on your failures.  I think that you can learn just as much from them as you can your successes.  I remember taking a class in Geology (thanks general ed requirements!) and I was awful.  I did not know what I was doing and I would have much rather been discussing post-modern theories in literature than staring at a rock.  I quickly became disinterested in every geology class and found the field trips to be unbearable.

One day, we went to Thatcher Park.  I was asked to identify the strata of a rock formation.  It went something like this:

Professor: Brendan, can you point to the strata lines of this rock
Brendan: What?
Professor: Yes, you.  Stop hiding behind Gary.  Come up here and point out the strata.
B: Um…OK.  It’s right about here (I began to casually show off the rock Vanna White style)
P: You’re wrong.  Where is the strata?
B: Somewhere…in this general…area? (Now I started to move both hands frantically in the hopes of pointing out something)

Finally, someone in my class took pity on me and whispered where I should be pointing.  And my Professor knew it too.  The look he gave me was a mixture of disappointment, anger and just a bit of nausea.  It was embarrassing.

I ended the semester with a C.  To this day, I can not tell you anything I learned about that class and it’s not the professors fault.  What I learned from that failure was that while I know I am not cut out to be a scientist, I should have put more effort into the class.  From that point on, I tackled other subjects I was disinterested in with the same level of effort I usually reserved only for those classes that interested me.  I learned from my failure.

So take this time to not just celebrate the successes but learn from your mistakes.  That’s what college is all about.  It’s the only environment where if you make a mistake, you have a ton of people that will support you (administrators, staff, faculty, friends) and will help you learn from your experience.

And please, if you take a geology class, learn where the strata is.