Students in Professor Theresa Flanigan’s Introduction to Art History and Visual Literacy and Architecture of the American City courses took the Getty Museum Challenge to recreate works of art or architecture that they had studied in class using objects found in their quarantine environments. Students further demonstrated their knowledge of the elements of art and art history by describing how their recreations emulated the key visual and stylistic characteristics of their chosen models. 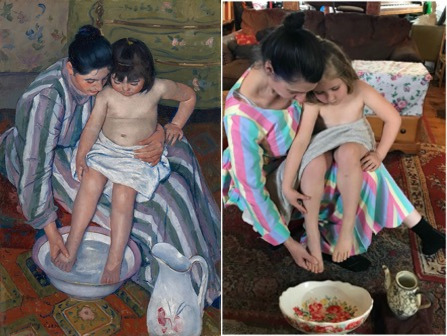 Excerpt from description by Evelyn-Marie Rose:

When recreating this painting, I used my mother and youngest sister as the models. I have had to bathe my younger siblings before and it is a hard task to accomplish at times. Even having to model taking a bath my sister refused. My mother had to force her to model for the picture just as the mother in Cassatt’s painting probably had to force her daughter to take a bath. When setting up the scene for the picture I realized the different perspective of both the bowl and jug. My father suggested putting the bowl up on blocks at one end to get the desired perspective. He told me Cezanne had done this in a variety of his still-life paintings to get strange perspectives.

Then I had to dress my models. My mother found some striped fabric and made a shirt out of it quickly. Then I just had her tie the remaining fabric around her waist. The patterning is an important part of the painting and it couldn’t be left out. Next, I promised my sister I would make her a cheese sandwich so that she would pose for the camera. I wrapped her in a towel and gave her various directions so that I could get her to look like the child in the painting as best as I could.

The placement of the child’s arms is very specific in the painting and the negative space that was created by the child’s left arm is important to include in the recreation. I instructed my mom to hold my sister’s foot and lean into her. I took multiple pictures from different angles and finally I was able to get a recreation that looked most similar to Mary Cassatt’s The Child’s Bath. 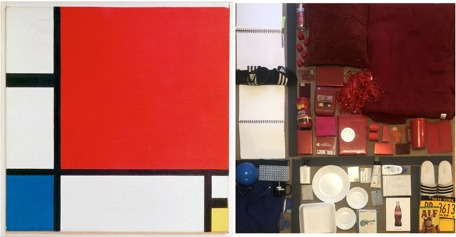 Excerpt from description by Jarod Babicz:

Built upon reality and basic geometry “Composition II with Red Blue and Yellow” focuses on more than what is present to the eye. The delicate relationship between the vertical and horizontal lines mimic the rhythm and vibrations of life. There is so much representation for life found in this movement. I tried to emulate that when recreating this painting. When finding objects for this recreation I wanted to make sure it would stay based in real life, since the de stijl movement focuses on life so much. The use of primary colors is very prevalent in de stijl works.

Looking for objects, it was hard to find true to life, completely primary colors in everyday objects. However the objects I found fall into monochromatic sections of the primary colors. And a lot of these items have a connection to my personal life. While de stijl focuses on the constructs of life, these objects focus on the constructs of my personal life. On the upper left side of the composition, I used two of my old identical sketchbooks to fill the similarly sized spaces. In between lies an old pair of shoes I used to wear to work. Throughout pieces of stained glass samples, I was only able to get these because my parents work in that industry. Stained glass has been something I’ve been around my entire life and it has influenced the paths of my life.

De stijl focuses on all aspects of life and the inner workings of how the universe plays out. And while de stijl pieces may not look like they contain a lot of information they do. These objects may seem unimportant but I spent a lot of time making sure they all brought information about the inner workings of my life. I used everyday objects like shoes, inner plates, blankets, pillows, and coffee. And even some unusual objects such as my mother’s senior yearbook, a license plate from an old partner, and a dvd of ALF which was one of the first TV shows I remember seeing as a kid. I tried to put as much thought and meaning of life into this recreation as I could.

It was difficult to bring something new as the composition wouldn’t be changing. However, I feel as though I have bought something new to this recreation of a classic de stijl piece that still coincides with the movement’s fundamentals.

Excerpt from description by Patricia Dean:

I chose to recreate the Albany Plaza and focus on the viewpoint of the tunnels looking at The Egg. The plaza was designed by Wallace K. Harrison in 1965-1976 and the Governor at the time, Nelson A. Rockefeller patronized it. Most materials that were used in this plaza are reinforced concrete, glass, and imported stone. My materials included cardboard boxes, graham crackers, an anvil from my brother’s Minecraft game, a hard-boiled egg, and some artificial grass. The style the plaza represents is international modern and it is clear to see no matter what angle you look at it from. I chose to use this angle because it highlighted the unique shape of the Egg, while showing a bit of the plaza behind it. The Agency buildings in the back have a rectangular shape with a flat roof, a skeleton frame in which I aimed to show through the black lines on the graham cracker, and a free façade which is a glass curtain of windows. The top of these buildings are flat and are used for rooftop gardens.

International modern style aims to follow LeCorbusier’s Five Points including free plan, pilotis, roof garden, free façade, and strip windows. The Empire State Plaza does this and I tried my best to incorporate as much as I could in my model … To be honest, I always liked the plaza with its tall buildings, oddly shaped egg, and square museum. I actually have a personal connection to some of the buildings as well. I graduated high school in The Egg as well as had many dance recitals there so seeing that funny looking building reminds me of those many, many good memories. My father works at the NYS Museum so seeing that building always reminds me of him. These are the reasons I chose to pick the plaza. 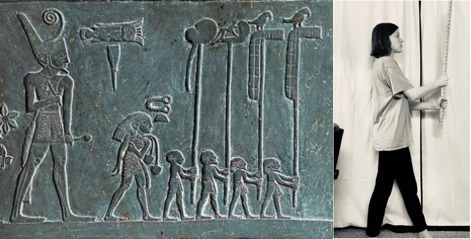 Excerpt from description by Katie Flood:

The Getty Challenge is a playful and fun challenge going around social media right now where people are recreating their favorite artworks at home with everyday objects. The Paul Getty Museum created this online trend to keep people entertained and lighten the mood while we’re all quarantined at home. From duct tape, to shower caps, and bubble wrap, people are finding fun and unique ways to mimic these masterpieces … I chose to recreate this work by copying some key stylistic features from the Early Dynastic Period. I recreated the rigid pose with straight legs and stiff knees. I faced forward and held a “stick,” just like these soldiers did. “The Palette of Narmer” shows Narmer’s victory so it only makes sense to show his soldiers on the work.

Excerpt from description by Hailey Hansen:

The recreation of this image was a little difficult to make, but it was the best that I could do given the circumstances. I had chosen a beige blanket to represent the gilded silver on the sculpture of Virgin of Jeanne d’Evreux and I draped it around my head and shoulder, trying to cover my entire body with it just like the sculpture. The exaggeration in the drapery made the Virgin more naturalistic and made her pose elegant.

My Christ Child was my dog Chewbacca, this was the tricky part because I could not get the intimacy that the Christ Child had with the Virgin. I held him as close to my face as possible, to create that bond. Of course, it was difficult to have his paw resting on my cheek. Also, I was unable to have my dog hold a pomegranate in his paw, similar to the Child holding a pomegranate. This was a symbol that is used for the Virgin and Child, it means fertility and resurrection. I chose my dog because our bond is very close where he would not squirm or be upset with me by holding him. I believe I was most successful with my stance; I have a contrapposto and S curve to show that my hip was bearing the weight of my dog. In the sculpture, the Virgin was holding a staff in the other hand. I did the same, but with a household cleaning product.