Students in Professor Theresa Flanigan’s Spring 2021 Introduction to Art History and Visual Literacy class took the Getty Museum Challenge to recreate works of art they studied, using objects and materials found in their personal environments. Students demonstrated their art historical knowledge by describing the key features in their chosen artworks and explaining how their recreations emulated or transformed these characteristics of their selected models.

The content has been edited for style and presentation. 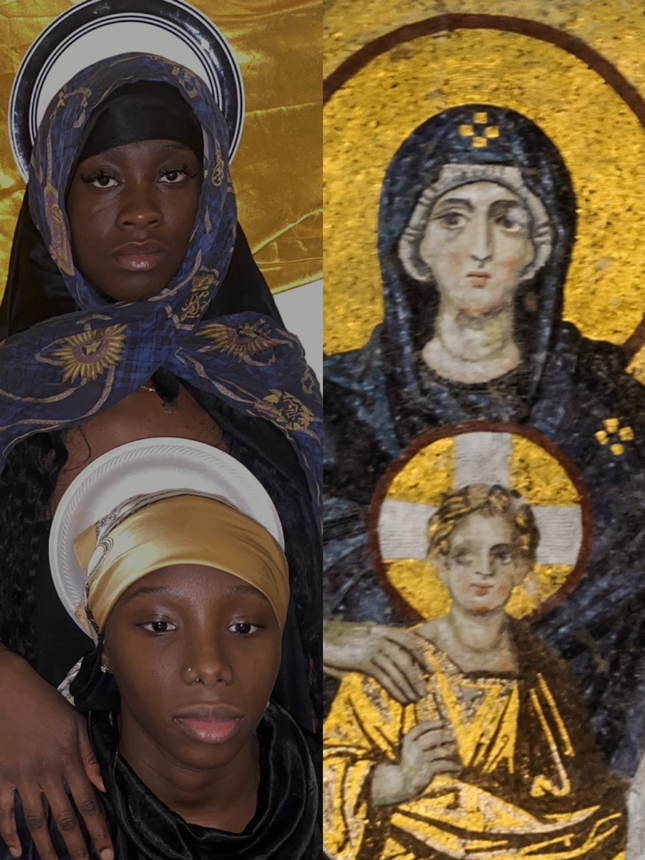 Description: The image that was recreated in this case is the “Theotokos mosaic (Virgin and the Child)” in Hagia Sophia, Istanbul, in the 867th apse. The artwork is a representation of Mary holding the child Jesus Christ on her lap. The artwork was made 16 feet high on the inner side of the roof in the apse of the church of Hagia Sophia. The art was made in the middle Byzantine Empire period (Atchison). The architecture and mosaic decoration used was common during this era and followed iconoclasm’s stifling of arts. This art marked the return of religious art after a long spell that followed the iconoclasm controversy period.

Recreation: To be able to recreate this artwork, I used household items. … This recreation tells a long history of art that has transcended through ages to exist in a period that appreciates its history. The materials and design used are one key aspect that keeps the art special and ensures its continued existence. 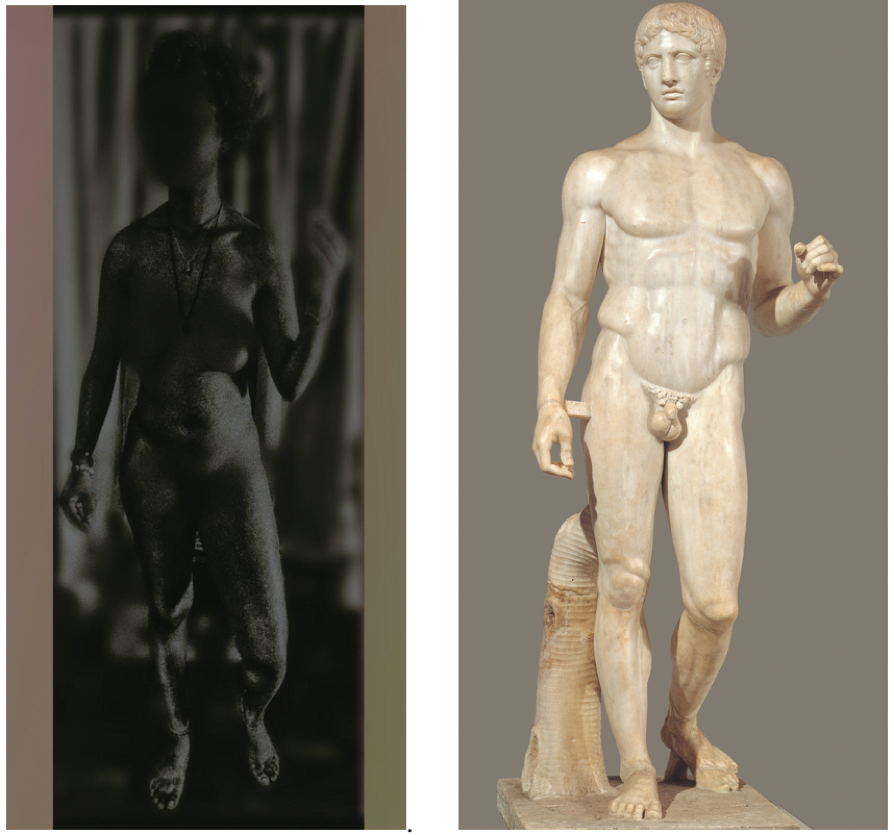 Description: The ancient Greeks idealized the human body and its beauty in proportions. Their fascination was often displayed in their painting and sculpture, which changed the standards of art over the centuries. The Romans were also amazed and influenced by ancient Greek art and tried to obtain or copy their sculptures, paintings, and architecture. The ancient Greeks believed that Polykleitos demonstrated the beauty of ratio and naturalism in the body of Doryphoros, otherwise known as the Spear-Bearer. The creation of Dorphyoros also followed the concept of a canon, “a rule for a standard of beauty developed for artists to follow” (Harris and Zucker). Polykleitos created a statue showing a naked muscular man, exposing the genitals representing the embrace and appreciation for the human body. A male figure was made to demonstrate the idealized features of a man who looks as if he is taking his first step or able to be in motion.

Recreation: “The Doryphoros” is a captivating sculpture to analyze and inspiring to recreate. The recreation is in the form of a photograph, using a cell phone. A female model was used in the photograph instead of a male to show the evolution for acceptance of the naked female body. … “The Doryphoros (Spear-Bearer)” by Polykleitos was one of the most intriguing Greek sculptures because it displayed a new technique for artists to design naturalistic art. Being able to create the perfect form using mathematical knowledge guides the standard beauty of the body and also gives a realistic perspective of the human figure. 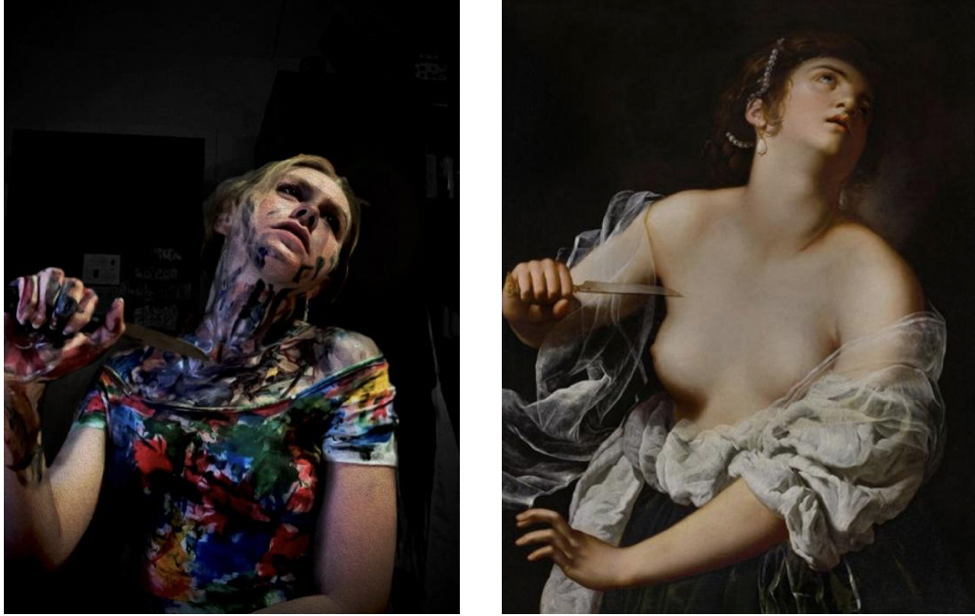 Description: The portrait “Lucretia” by Artemisia Gentileschi was recently rediscovered from a private collection and is now in the hands of the J. Paul Getty Museum after centuries out of the public eye. The oil on canvas portrait was supposedly completed in 1627 by the renowned paintress as she was referred to by her clients and the nobility of Florence, Italy. The subject of the piece is based on the story of a heroine from Rome named Lucretia. The legend states that Lucretia was raped by the son of King Lucius Tarquinius Superbus, Sextus Tarquinius. Her life is sadly cut short, when in an act of defiance, she calls out to her husband and father proclaiming her innocence, asking for vengeance, and then finally, kills herself with a knife through the chest. […]. Artemisia was known for her raw and heavily realistic depictions of powerful women, which caused her to stand out among her colleagues such as Caravaggio in the Baroque Period. The two accomplished artists are often grouped together due to their similar styles such as the use of intense contrasting light and shadow also known as chiaroscuro, using diagonal angles and lines, naturalistic subjects and settings, and emotional subject matter.

Recreation: Once I saw the piece, I was instantly captivated by the story and the courageous woman herself. I knew I had to recreate the image, but how could I do the image justice and put my own unique spin on it? Lucretia’s suicide supposedly started a rebellion that eventually overthrew King Tarquinius and his family, but it was all at the expense of a tragedy — people in power lacking respect and dashing their hopes for a brighter future. This is when I thought of the Art Department cuts. … But when it comes to the dramatic imagery of the story, I decided to take some creative liberties and take the message of tragic sacrifice and apply it to the current day. … The illusion adds yet another layer of drama and emotion, especially since it is a current event that we can relate to. 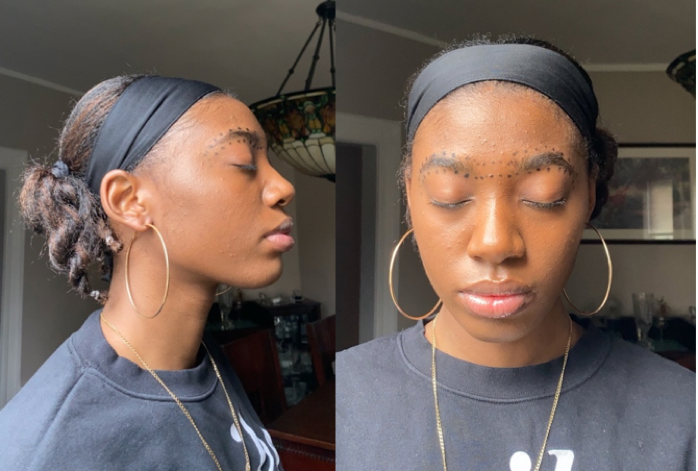 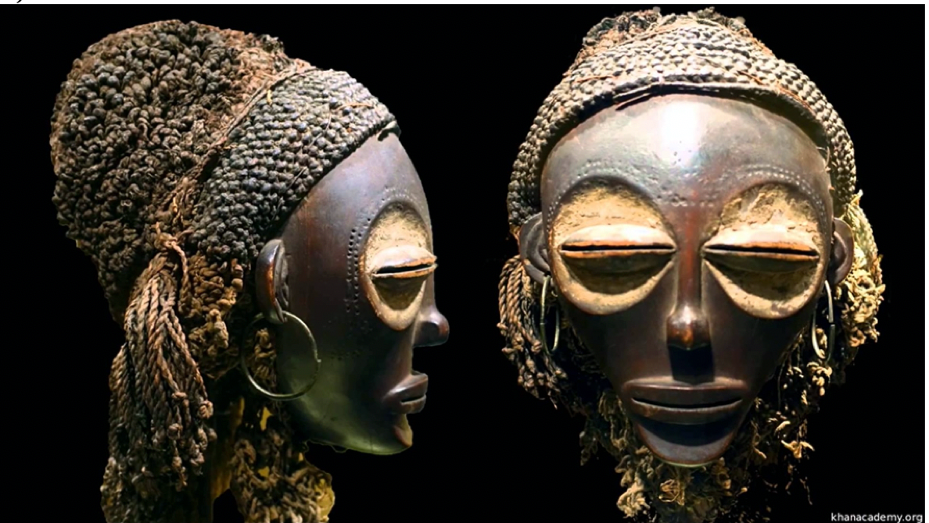 Description: The piece of art we focused on is titled “Female (pwo) Mask,” Chokwe people, Democratic Republic of Congo, from the early 20th century, made of wood, plant fiber, pigment, and copper alloy. The piece is a mask that the men would construct and wear during celebratory dances of the tribes’ mothers specifically. Unlike most of the cultures we learn about, the Chokwe people had matrilineal practices, meaning “of or based on kinship with the mother or the female line” as stated by Oxford Languages. As a result, the tribes would hold different events to celebrate the young women who had been strong enough to cross the threshold of motherhood. In order to properly pay homage, the men would make masks out of wood and carve them to emulate a young woman with her eyes and mouth closed as she wears her hair wrapped up to the back, with plant fiber imitating twists coming down the base of the hair. The mask’s attention to detail does not stop there, because if you look close enough there seems to be low relief or pounded dots going around and in between the eyes as well. While I am not 100 percent sure if the women of this tribe had these dots painted on, tattooed, or scarred onto their skin, I do know that there are a few things they might symbolize.

Recreation: In my take on the Pwo mask, I can be seen posing with my mouth and eyes closed, wearing large round earrings, dots around and in between my eyes and my hair pulled back with twists at the base of my hair to emulate the mask best.