Athens- “It was eventful.” 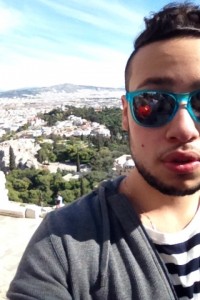 selfie at the Acropolis

My time in Athens was eventful to say the least. Traveling on the discount airline, Ryan Air, was a slow burning torture. The cramped seats, mixed with hot air and constant interruptions by staff, made the round trip ever so dreadful. After landing in Athens, our group of seven was quickly separated. Lovely, right? The bus, meant to transport us to Syntagma Square, arrived early while we were still purchasing bus tickets. Four people in our inseparable group decided to board the bus while I and two others were still waiting on the ticket line. It was then that the bus closed its doors and sped away. Although there was no malicious intention behind their actions of getting on the bus, I found myself spewing a stream of obscenities in their direction.

When first arriving into Greece, you are bombarded with graffiti images on the walls of buildings in poor areas. The economic collapse in Greece has led to rampant poverty. As of October of 2014, 40 percent of children in Greece are in poverty.  The saddening facts come after a period of unwise spending and enormous increase in debt. Many attribute the financial strain to be caused by the nation’s switch from their own currency, the drachma, to the euro. No matter the reason, it’s heartbreaking that 6.3 million people are edging on poverty, in a country with roughly 11

million people. Many street performers, with their children, attempted to earn money by playing violins, singing, and selling knitted blankets. The 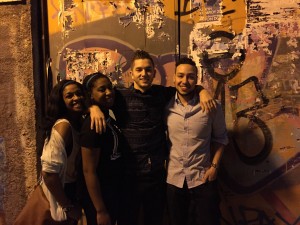 Posing on the streets!

homeless rested on city streets. Thankfully, the weather was sunny, so they didn’t go cold. One man we walked past had relieved his bowels on the street, next to his makeshift bed. There were plenty pf homeless dogs throughout the city. Some were joyous, running around through the city streets, eating scraps with the pigeons. Others were sick and dying. I almost stepped on a golden retriever, lying in a corner on top of the Acropolis. His breathing was measured, with a large grey and red tumor emerging from his right hind leg. After witnessing these horrific sites of poverty, I am even more fortunate for the blessing of basic necessities.

Our group made it to the hostel, after the unnecessary split. The living quarters were spacious, equipped with a living room, bathroom, kitchen and two

small balconies overlooking a quaint Athens street. The food was beyond amazing. We feasted on gyros, moussaka, souvlaki, baklava, gelato and the Greek Mac from McDonald’s to name a few. We developed a rapport with the manager of a restaurant named Arcadia. He, along with other locals, was friendly and helpful, teaching us a few words in Greek. By far my favorite meal was at a frozen yogurt shop. Greek froyo with strawberries, pineapple and Nutella made the three and a half hour journey well worth the hassle. Let’s just say when I got back to London, I ran eight miles on the treadmill.

On both Saturday and Sunday, we explored the city, viewing the ancient, tourist drawing wonders. The Panathenaic Stadium was a personal favorite site of mine. The stadium was the home of the first modern Olympics in 1896. Made entirely of marble, with a capacity of over 45,000 people, the structure was fascinating. I’m a concert goer. Knowing that Run-D.M.C, and Bonnie Rait were among the few to play at the venue made the visit all the more special. Unfortunately, we weren’t able to go inside the stadium, as it was closed. The Parthenon was a beautiful site to climb. Taking selfies in front of the Acropolis and the Theatre of Dionysus made the day all the more memorable.

We had seen a large mountain protruding from the center of Athens, with a smoky white chapel on top, as we 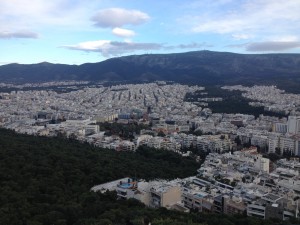 view from the Alsos Lykavittou

descended from our plane ride. Never did we imagine that we would be soon be looking at the world below us, on the mountain top. Two friendly taxi drivers offered to drive us up the mountain for a reasonable price. After this, a short hike was required to view Athens from the top. The sight from the mountain top was breathtaking, and inspiring. Homes with red roofs were sprawled out below us, extending far out into the country side. The green mountains surrounding Athens were vaguely in distance, with clouds circulating its peak. The sea was in distance. Sparkling blue water rested peacefully as the sun gleamed down upon it. Small fishing ships relaxed on the sea, slowly rocking from the small rippling waves. That moment of first looking onto the vast horizon in front of me, is by far the best experience I’ve had, since being in Europe.

Nightlife in Greece, starts much later at night. In America, the nightlife usually lasts from 9 p.m until 3 a.m. In Athens, this would be from 1 a.m until 11 a.m. Our tired and jetlagged group of Americans couldn’t handle the continuous catchy mix of Greek, Spanish and American pop music for 9 hours. However, we did appreciate the nap we desperately needed from 10 p.m until midnight. In the states, that wouldn’t be possible, if one wanted to have a productive evening.

The trip did have its little disappointments. We were all desperately looking forward to going shopping, in hopes of great deals. When we arrived at the stores, they were all closed. It was only 3 p.m. This shocked me. I’m not aware of certain customs regarding what time Greeks work until. However, if the flea markets are open, so should H&M. In a way it was better that we didn’t spend all of our time in brand name stores. It was better for us to explore the Athens flee market district. This is where I purchased clothing, snow globes and other touristy memorabilia. We did get lost in the city for a good amount of time after shopping. In this time my friend managed to drop her phone in a crack in the floor, above the Athens Underground. It wasn’t retrievable, and most likely shattered. We were then yelled at by an elderly woman in Greek for about 10 minutes, until police came to escort her away. The majority of her rage was at one of my African American friends. Out of the few words we were able to point out from her, we understood her say “negri” quite a few times. While that isn’t really a word in the Greek language, one can only assume her anger was directed by her bigotry for Americans and, specifically, minorities.

I titled this blog entry “It was eventful” because when asked about the trip, that is really all I can say. Greece was amazing. I spent a weekend getting closer with friends who I’ve only known for a month. I was able to explore an ancient citadel. I ate enormous amounts of amazing food without any regret. The poverty in Athens, along with the overall chaos of traveling, sobered my experience. We are all so lucky to have a house, food, an education, a job, etc. Traveling has opened my eyes even more to the worldly crises only seen through news stories. I hope and pray that the people of Greece are able to find strength in each other, and push forward in these difficult times. 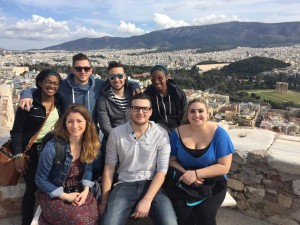