Dictionary.com defines hibernation as:
“hi·ber·nate
[hi-ber-neyt] verb (used without object), -nat·ed, -nat·ing.
1. Zoology . to spend the winter in close quarters in a dormant condition, as bears and certain other animals.”
This is pretty much spot on except for the bear and other animals part… most of the time.

As soon as this lovely weather hit everyone was outside on quad- I swear I havent seen some of these people since it started getting cold. Anyways, at any given time between the hours of 11 to 8 there are tons of students outside playing the clichéd yet still fun college games like frisbee.

Last night I was bumming that I would not get outside as I had Student Association and then office hours that ran until 7.  I thought for sure everyone would be inside already but when I walked past the quad I was pleasantly surprised that at least 40 students were still milling around. My friends Ariana and Emily were even playing a game of “Peper“, that crazy dangerous (to non-volleyball players that is) volleyball game that I mentioned in a previous post. I, ever so out of character because of the weather, jumped into the game for a few passes before I realized what I was actually doing.

After I was done endangering my life with Em and Ari I sat on a bench and observed the groups of people. I was astonished as to the sheer number of people out and about at 7:00 on a Tuesday night. THANK YOU day-light saving time and the weather gods for bringing Saint Rose back to life and awaking the students to hangout outside. 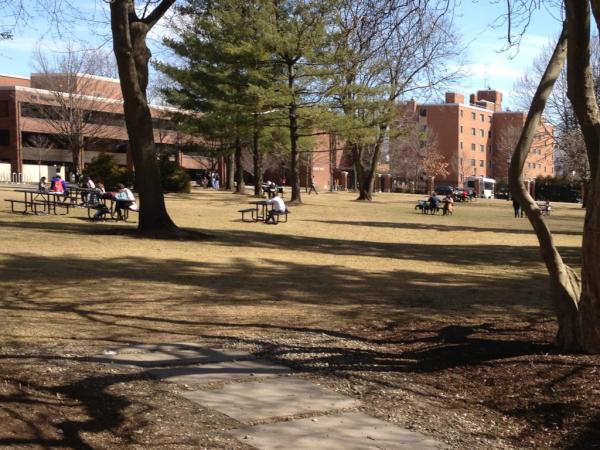 The quad during lunch break

← Time flies when you’re….an Admissions Counselor
Reporting the News at The College of Saint Rose →