Last Tuesday, I got to attend my very first Dodgeball Madness here at Saint Rose. You might have heard that I switched from my regular twitter handle, @stroseamelia, to handle the Official College Twitter with the hashtags, #DodgeballMadness and #stroseamelia. But, if you’re not familiar with this extremely epic tradition, let me set the scene for you: 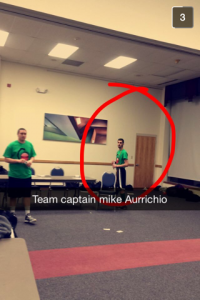 The stands are filled with excited students, rooting for their friends that are spread out onto various teams. This year’s teams were the Ancient Hawaiians, The Lucky Charms, The Mighty Dodgers, Gym Class Heroes, Starting 11, The Money Team, Team CEP, Slumdodge Millionaires, BGZ, We’re the Millers, and the returning champions, Patches O’Hooligan’s. One of my favorite people, Mike Aurrichio, was on this team. (Actually, he was the team captain. No big deal.)

Each team bursts through a banner with their team name written on it, and does a lap around the gym while the crowd cheers them on, and music blasts through the speakers with a song each team has chosen. Then, everyone gets down to business. Game faces are on as each team faces off in a March Madness-style bracket system. There are epic catches, heartbreaking losses, and some pretty amazing wins all around. Each of the teams in their various brightly colored Dodgeball Madness t-shirts had at least one truly memorable and awesome moment.

In between the end of each bracket, the emcees would pick winners to raffle prizes! Everyone was looking forward to the moment when the grand prize would be drawn- the coveted yogibo. If you’ve never sat in a yogibo, I would advise immediately finding your nearest location and sitting in the extremely comfortable, absolutely glorious bean bag chairs immediately. They are super fantastic.

In the end, it was an epic showdown between the Slumdodge Millionaires and the Mighty Dodgers. Each team played incredibly well; there were some mighty dodges and some wicked throws that left the crowd in amazement. In the end, the Slumdodge Millionaires were victorious! It was a really fun night and has definitely been written down as one of my favorite Saint Rose memories to date (even though I didn’t win the yogibo haha)!

It was really great just to be able to go to this wonderful school event and enjoy being with my friends, and watch my other friends be pelted with dodgeballs. I’m so thankful for all the memories I’m making this year and I know I will carry them with me always!

Signing off until next time, 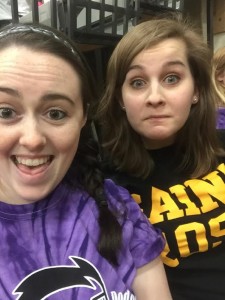 Me and my fav, Meghan Kiely! (I look like a turtle?)