If you’re a Saint Rose student, you’re probably somewhat familiar with our annual event Dodgeball Madness. I will never forget that my first free Saint Rose t-shirt was one that I received at my freshman orientation: a green Dodgeball Madness shirt, that said “Embrace the Madness”. Let me tell you, when I went home from Orientation, that was my new favorite shirt. I guess I thought I was really cool because I had already gotten something from Saint Rose that looked like I was involved in something that sounded exciting. Little did I know that a little less than 3 years later, I would be the Vice President of our Student Events Board, working with the president to plan this exciting event.

Dodgeball Madness is no small task. I had a brief idea of that. What I didn’t have much of an idea of is the amazing feeling I would have after it was over. There is no greater feeling than knowing that you helped to plan an event that packed our gymnasium, gave 120 students and staff the opportunity to throw dodgeballs at each other, and watched one team feel on top of the world winning a trophy that they can’t even keep. 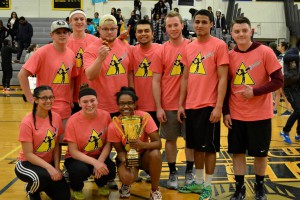 We Are Gladiators – The winning team!

I never would have imagined when I came to Saint Rose that I would be a part of making one of the largest events on campus a reality. I never thought I could do it; and yet here I am. Planning this event showed me that setting your mind to something can and will make it possible, even if you never thought it would. And this is something YOU have the capability to do as well! Never doubt that you can make something happen. Have an idea for something you want to see on campus? Make it happen! Get in touch with the right couple of people along the way, and BAM! you’ve just impressed our campus community with your awesome event planning skills. My advice for you? Don’t be shy, put yourselves out there, and show Saint Rose how great you can be. Even if it just starts with a free t-shirt. 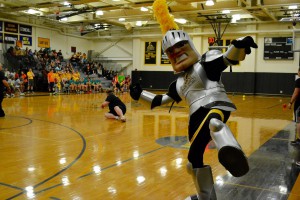 FEAR having a great time at the event!