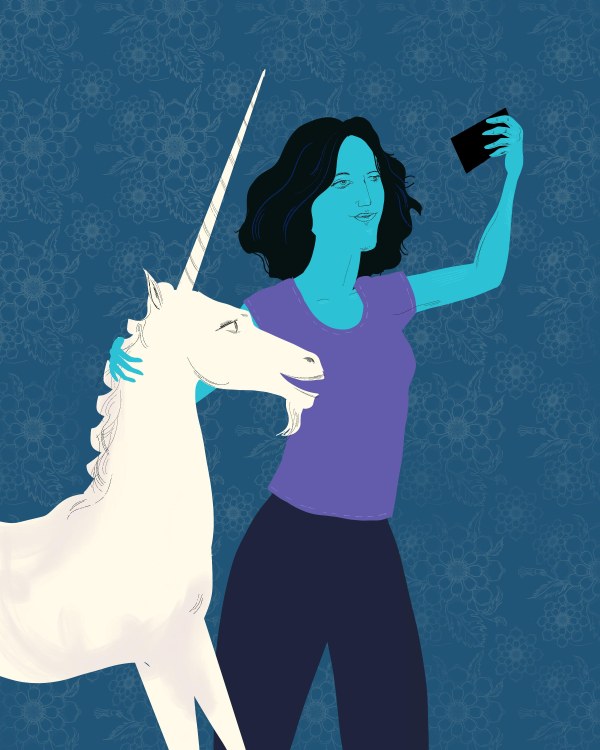 Unlike much of what has happened at Saint Rose and the rest of the world lately, Associate Professor Daniel Nester actually planned to teach his English 254 class remotely. Devoted to online journal editing and publishing, the brand-new class is project-based, meaning students would be meeting a series of deadlines for their editing and publishing projects.

Their goal: produce a special-themed edition of the Pine Hills Review, the College’s literary journal, established in 2014. For this one, students would be expected to plan and publish an interview with a published author. The class, writers of fiction, creative nonfiction, and poetry, as well as visual artists, also needed to solicit submissions from other writers, select, edit, and publish them. And the student editors needed a theme.

Via VoiceThread, which allows text, video, and audio comments, they brainstormed and then decided on unicorns, which Nester said lent itself to exploring dreams, visions, much-needed escape, and hope.

“And within three weeks we got 100 or so submissions from around the world,” Nester said. “Students took seriously their task of selecting pieces for publication and surprised me with their choices. “

Marzia Syeda, for example, interviewed the co-author of an upcoming book on unicorns. Tori Felter wrote the editor’s introduction, which Nester said, took on a different quality since, by then, students had all moved home because of the pandemic.

The result, delivered on deadline and from far-flung locations, is a diverse mix of student and outside work, an interview with author of a book on unicorns, a story of an older man who finds himself on a time-bending journey, and poems, including one called “I Got a Problem with Shel Silverstein’s Unicorn.”

English 254 has also been a learning experience for Nester, who admits he is accustomed to more control.

“I had to let go a little bit organization-wise, but it’s paid off,” he said. “Every student has published an interview, they’ve co-edited a pop-up publication, and they have put together their own project as well, from lesson plans that center around literary journals, social media posts for Pine Hills Review, or starting up their own literary journal themselves.”