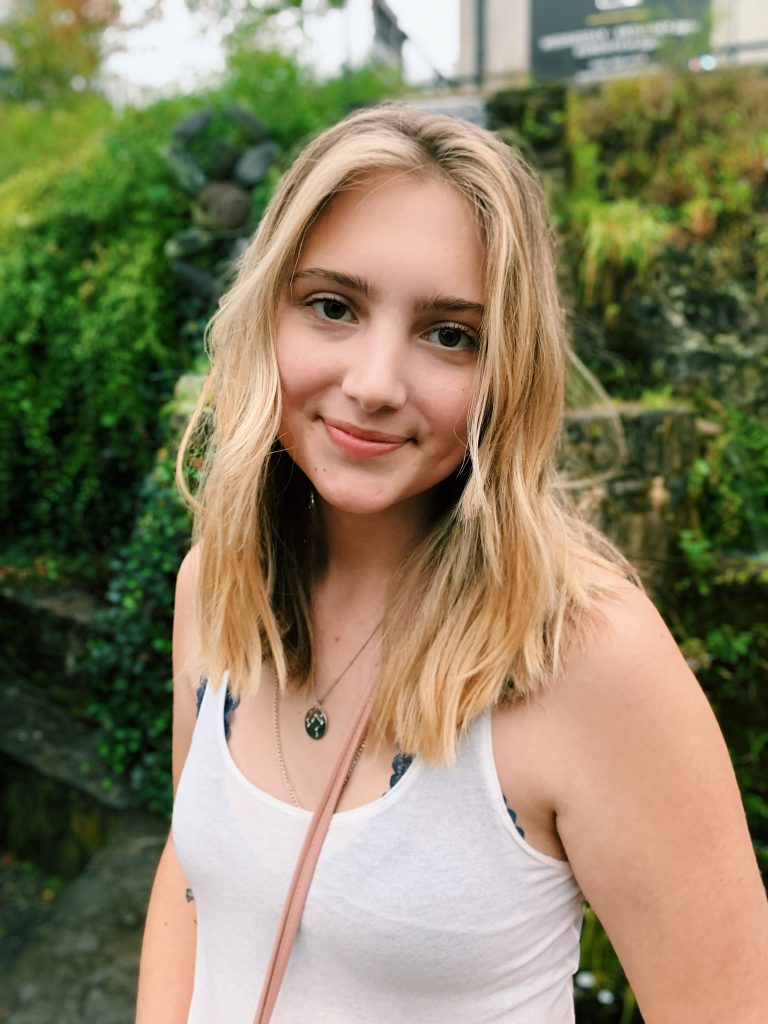 When Mary Borchardt ‘21 received the news that she had won the Psi Chi Regional Research Award, she almost didn’t believe it.

“I had to check my email a couple of times in case they sent it to the wrong person,” Borchardt said. “But I am excited about it!”

Borchardt, who is a forensic psychology major, received the Regional Award through the International Honors Society in Psychology (Psi Chi) for the undergraduate research she submitted to the Eastern Psychological Association (EPA) for its conference in March.

She almost didn’t get her application in on time. She was preparing to run her study in the fall of 2019, when Katlyn Farnum, a psychology professor at Saint Rose, announced that the EPA was accepting proposals for the upcoming conference. The November deadline was fast approaching, but her in-person study, which focuses on attitudes toward mentally ill offenders, was still in its infancy.

“Thank goodness our school is the way it is, with Dr. Farnum working with us closely, because I would not have been able to get it done on my own,” she said. “Somehow, I managed to collect all my data in time and pushed it through.”

Her hard work paid off. Borchardt is one of 20 students whose research was accepted into the EPA Conference and the only Saint Rose student this year to receive the award. The Department of Psychology has had both psychology and forensic psychology majors give presentations at this conference each year for more than 20 years. Due to the COVID-19 pandemic, the conference was rescheduled for June and will be delivered virtually. Nevertheless, Borchardt is excited to share her findings with an esteemed group of psychology professionals.

The idea for her study — titled “Attitudes Toward Mental Health Care in Prisons” — began in Professor Al Chapleau’s introductory criminal justice class, when Borchardt watched a documentary about solitary confinement that described the lack of mental-health resources available to offenders. Borchardt said she was shocked to learn about this gap in mental health care, and wondered if other people would have the same reaction. She decided to expand on this topic for her Research Methods class sequence (psychology students take a two-part research course, Research Methods One and Two).

“I started looking into it more, and there are a lot of studies out there looking at different prison populations and percentages of people with mental illnesses. There weren’t that many studies on everyday people’s perceptions and advocacy [for mental health care],” she said. “Learning is what we need to do to spread awareness, especially in the mental health care field. So, I thought that would be interesting to look into.”

The study consisted of two components: a literature review and an in-person experiment. The in-person experiment asked a small sample of Saint Rose students to fill out a questionnaire on their perceptions of the mentally ill, and a separate questionnaire on their perceptions of mentally-ill offenders to establish a baseline metric for their beliefs.

After watching the video, the students filled out the questionnaires again. Borchardt found that the students who watched the video about mentally ill offenders had a decrease in negative attitudes toward this population.

“For all their studies, we try to make sure they are hypothesizing based on what their literature suggests should happen,” Professor Farnum said. “We were hoping that would happen because there is a lot of literature on using education to reduce stigma and bias.”

Farnum said that students come up with their own research subject and develop their studies throughout both parts of Research Methods. Farnum is there to guide them throughout the process, but she also takes a hands-off approach when appropriate.

“For research methods, we take the view that it doesn’t have to be a groundbreaking study,” Farnum said. “Making mistakes matters — I don’t want to stop them from making small mistakes; I want them to learn from them.”

“Most other places give them a data set to analyze; in a school where I taught, the students did group projects,” she said. “I think Saint Rose is unique in that every student has to do their own project.”

The goal is for them to get a feel for what it is like to pursue a career in research. For some students, their research culminates in presenting at the EPA Conference. For others, like Borchardt, they take their studies a step further.

Borchardt said she hopes to expand on her study, perhaps in grad school or a Ph.D. program. This study had a profound effect on Borchardt, so much so that her ultimate goal is to work with communities with mental illness, particularly within the prison population.

Right now, however, she’s working with another psychology faculty member and her advisor — Professor Ross Krawczyk—on an independent research project. Although not tied directly to forensic psychology, this study focuses on body portrayals in children’s movies. At the end of the study, Borchardt will present her findings in an honors-level thesis to gain credit for her work. She will begin the study over the summer.

“I have learned that it’s not just about the topic — I just really like research,” she said. “The topic can vary and I am still excited to find out what happens.”

Jaime Kendrick— The Interaction of Employment and College Performance

← Tenure, Retirements, and Other Faculty Milestones
Missing Your Classmates? Care for Yourself, and Reach Out to Them! →