Everyone knows about at least one of our on-campus clubs at Saint Rose. There’s SA (Student Association), The Chronicle (our school newspaper), a theater club, and so many more! My personal favorite is MISA, the Music Industry Student Association, but don’t let the name mislead you; students of all majors with any interest in music are welcome!

MISA does many things as a group. To start, there’s our open mic nights in Jack’s Place, our on-campus concert venue in the Hearst Center (formerly known as CCIM), where you and your friends can come to perform music for a crowd of your peers the first Wednesday of every month. We have had all sorts of acts at these shows: solo singer/songwriters, small groups doing cover songs, and even a local punk band, Nine Votes Short! It’s free to play or just come and watch, and it’s always a fun way to spend a Wednesday night. You never know what you might get to hear!

We host tons of other concerts in Jack’s Place, too! Like, real concerts with recording artists you might know! We’ve had Transit and Hit the Lights perform on the Acoustic Basement Tour, sponsored by Vans Warped Tour, as well as some lesser known groups like Restless Streets, Pretty & Nice and The Icarus Account to name a few. This year, we aim to further diversify the performances in Jack’s Place to make it a more enjoyable venue for music lovers of all genres. 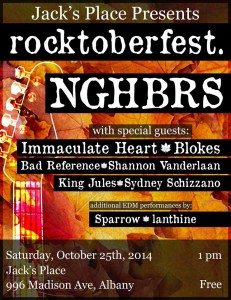 Two of the biggest shows MISA is a part of throughout the year are Rocktoberfest and Rose Rock! Rocktoberfest is an annual show in October that has previously taken place on the quad. However it has been way too cold that time of year for us to attract much of an audience, so we relocated it to Jack’s Place this year. There are always some fun, seasonal activities going on during the show, like painting pumpkins! This year, Roctoberfest featured NGHBRS as it’s headliner!!!

Rose Rock is an annual show during the Spring semester on the quad featuring several talented local opening acts, one signed group hired by MISA, and another, even larger act to headline the show. The headliner is hired by Student Association.  They select the artist they hire by building a list of possible artists and distributing flyers to students that they fill out and return to their office located in the Events and Athletics Center, or EAC. This poll is taken a number of times as a means of significantly narrowing the list down to a few artists. The final poll is taken right on Blackboard to allow for an easy way to tally all the votes. This way, everyone has a say in who comes to perform at our school; and the best part is that it’s all FREE!!! That’s right, Rose Rock is a free show for all of us to enjoy! There is also food and a wide selection of activities to do on the quad during the show! 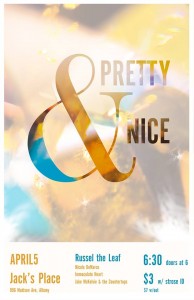 Above everything else, my favorite part of being a member of MISA is our annual trip to Pyramid Lake! Every year in the fall we drive out to a fantastic campsite for the weekend courtesy of the efforts made by the wonderful Sister Mary-Ann Nelson, one of the professors in the Music Industry department, as well as the Pyramid Life Center which hosts the event for us. You can read more in another post I wrote about this year’s trip.

This year, MISA president Avery Witherell hopes to get more people involved with the club. He wants to see a “change in paradigm” in MISA by doing more than just putting on shows and reaching out beyond musical activities. He also would like to stress the fact mentioned at the beginning of this post: students of all majors are welcome to MISA! So if you like music and you’re looking for something fun to do on Thursday nights at 6:30 p.m., come on down to our MISA meetings in Room 120 in the Hearst Center located on Madison Ave by the Massry Center for the Arts!