by Alexander Lawrence on November 6, 2015 in All About Saint Rose, Golden Knight Spotlight · 0 Comments 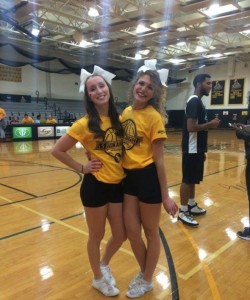 What set SR apart from other schools: “Definitely the campus. I like the brick buildings and how small it is. It felt very home like.”

Why SR Cheerleading: “My senior year of high school I emailed a lot of college cheer coaches and I emailed Kristyn Constantino. She was very helpful and really nice and gave me all the information about the team.”

Most memorable moment or game: “In high school my junior year our male basketball team won Sectionals. It was a really awesome moment because we had come really close the previous year, but fell short. Also two very special moments in my college cheer career have been getting a lot better at my flying skills and learning how to do a proper bow and arrow with the help of my teammates. It resulted in me winning most improved cheerleader. Last year my fellow teammate, Laurielle Morais, and I were chosen to be co-captains of the cheer team this year.”

How you got involved: “I got involved with cheerleading when I was 14. My first-year of high school is when I tried out for my high school’s football cheer team. I made junior varsity cheer and was moved up to varsity halfway through the year. Prior to joining, I had five years of experience with gymnastics, so I already knew how to tumble and jump. My sister swam in high school and both my parents did tennis and triathlons after college.”

Do you have a saying or motto you live by: “You perform how you practice.”

Where you draw your inspiration from: “I draw my inspiration from my past coaches; Taylor Vandyke, Holly Lawrence, Kelly White and Kevin Rosch (All high school coaches). They all taught me the basics and made me love cheer.”

How do you prepare before a game: “If we have a big performance like MidKnight Madness or Dodgeball Madness, I’ll run through the routine and stunts in my head, which helps my muscle memory and it makes me less nervous when performing.”

What are you looking to accomplish this year: “As a team we want to try and learn new pyramids. Personally I would like to work on improving my flying and tumbling skills and academically wise I’m hoping to make the Dean’s List.” 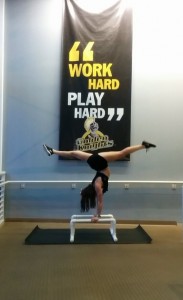 Anna showing off her unique skills

My Comments/ takeaway from the interview: Anna Blon is a third-year student currently seeking her degree in sociology at The College of Saint Rose. She’s all about doing her best and working hard to improve, whether it is cheer or her academics. “Since I’ve joined the team my first-year we had a standard set of stunts, but each year new people joined the team they would bring different ideas to the team and we’d learn a variety of new stunts. In the past seven years that I’ve done cheerleading, this is the  favorite team I’ve been on. Everyone works well with one another and we’re learning new stunts a lot quicker,” Blon said about her experience on the Saint Rose Cheer team. “We have a mentor program called ‘Big and Little’ where an older teammate would take one of the new teammates under their wing. My mentor Stephanie Staudle helped me a lot my first year with my confidence. We all hang out a lot and whenever I cook, I’ll invite my teammates over to eat,” Blon said of her teammates effect on her. Anna is a very competitive cheerleader. She wants to do well and prepares herself as best as possible whether it be performing or in the classroom. If any of her teammates need help she’ll be there to help anyway she can. She’s a great asset to her team and I know she truly treasures her teammates. During my interview with her I could tell cheer has changed her in many ways for the better and it was one of the best decisions of her life. She’s naturally a hard worker and I can’t wait to see Anna and the rest of the Saint Rose cheer team perform at the basketball games! Can’t wait to see what stunts are in store! 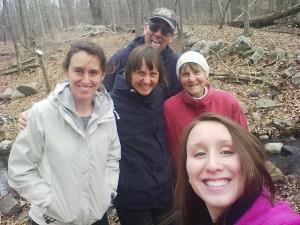 ← Introducing the Vets
IT IS STILL FALL PEOPLE →