by Alexander Lawrence on April 24, 2015 in Golden Knight Spotlight · 0 Comments 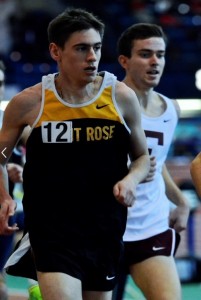 Most memorable moment or game: “This year at regionals for cross country. I ran the 10k and placed 33rd in the NCAA East Regional championships. That’s really when I separated myself from being good to being able to compete for championship events.”

What set SR apart from other schools: “Probably because Albany is a city and I wanted to go to school in a city area. They also have very good business program here.”

Why SR Track and Cross Country: “The fact that we face Division I schools and we’re a Division II school. They had the competition I was looking for. I wanted to compete at a high level and wanted to remain in the city.”

How you got involved: “I started running track when I was 16. I was a sophomore in high school when I tried out for track. I mainly played basketball my whole life until my friend Travis convinced me to try out for track. I was going for a run one night with my brother (Dan) and he told me to try also.”

How do you prepare before a game: “Michelle Lujan (fellow teammate) and I always eat ice cream the night before a meet.” 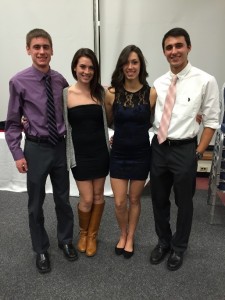 My Comments/ takeaway from the interview: Ben has had an enjoyable first two years running track and has accomplished a lot thus far in his time here at Saint Rose. Kapuscinski is seeking his masters in accounting. “The team has progressed a lot since I first walked into the program. We’re losing some guys so now we’re about to enter a rebuilding year next year,” Kapuscinski said. “On the track field I think my teammates have helped me slow down in practice and do more quality work-outs. Off the track field my cross country team has become my family. The distance and mid-distance guys always have each other’s back,” Kapuscinski said about his teammate’s impact on him. Ben has worked hard to get where he is today considering he had a late start to his track and cross country career. He’s put a lot of hard work into making himself a devoted and competitive runner. I got the sense that the skies the limit for Kapuscinski when interviewing him. He still has a lot to offer Saint Rose and I am excited to see what else he accomplishes while he continues to run here. He’s a very caring and competitive athlete and I think is developing well considering his late start. He’s a capable young man with a lot of upsides. My interview had a very calm and nice feel to it. I went to a Saint Rose track meet recently and got to see Ben run and boy was it a sight to see. I think Ben has made his mark on the team and will only continue to do so with the help of his fun-loving teammates. 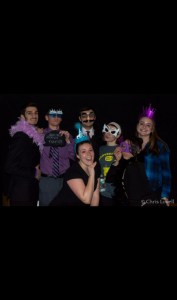 Ben having fun with some of his friends

← Education Abroad: Florence Edition
Hallway Sports and 3AM Lock Outs: They’re Worth It →