by Alexander Lawrence on September 25, 2015 in Golden Knight Spotlight · 0 Comments 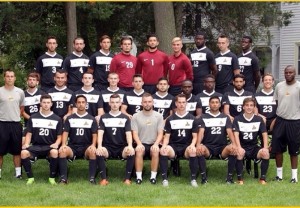 Justyn and the rest of the Saint Rose Soccer Team

What set SR apart from other schools: “I liked the fact of being closer to home.”

Why SR Soccer: “I was recruited here. The coaches that were here, I grew up playing for and I knew they’d help me bring my game to the next level.”

Most memorable moment or game: “I would say winning the state championship in soccer my senior year of high school. We tried to do it every year, but kept coming up short, so finally being able to do it was a big accomplishment.”

How you got involved: “I started playing when I was two years old. My parents signed me up to give me something to do and I ended up liking soccer. My dad played soccer and my little sister does too.”

Do you have a saying or motto you live by: “My mom used to say ‘leave it all on the field’ so that still sticks to the back of my head.”

Where you draw your inspiration from: “A big inspiration of mine is DeAndre Yedlin (professional soccer player).”

How do you prepare before a game: “The day of a game I like to get in a round of FIFA in and in the locker room I like to listen to music.”

What are you looking to accomplish this year: “I’m looking to help the team make it to playoffs this year.” 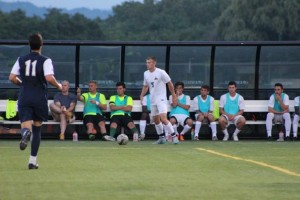 Verbraska in action on the field

My Comments/ takeaway from the interview: Justyn is an accounting major at The College of Saint Rose in his third year here.  He has set the bar for himself as the season for the men’s soccer team is underway. “As a freshman I felt we were developing more and progressing as a team as the season went. Now I feel we’ve developed as a program and going forward I see a lot of success for the team,” Verbraska had to say. “My teammates have pushed me to become a better person both on and off the field and they encourage me to be the best I can be,” Verbraska said about his teammates. Justyn sounds like a very determined man and is set on doing everything possible to make it to the playoffs. I was very content with the interview. As a student-athlete Justyn has learned how to manage his time and prioritize. Justyn is a very hardworking person and I look forward to watching the Golden Knights Soccer team compete this year and wish Justyn and the rest of the team all the best as they compete throughout the season. 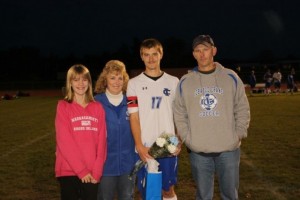 ← “Living the Dream” – The Saint Rose Way
The Experience of a Lifetime: Pope Francis at Madison Square Garden →