by Alexander Lawrence on February 6, 2015 in Golden Knight Spotlight, The College of Saint Rose · 0 Comments 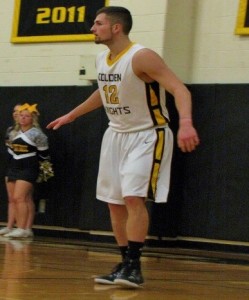 Most memorable moment from HS: “With my club basketball team in Guropean. My team made the 8th seed and secured the last spot in the playoffs. We weren’t supposed to be in the playoffs, but we made it. The only reason we made the playoffs was because another team couldn’t go due to financial reasons. Since we made the playoffs as the 8th seed, we had to face a team, Tsmoki, one of the best teams from Russia. We were the underdogs going into the game and ended up beating Tsmoki. No one expected us to win, besides us. Only we believed we could win. It was an emotional game and only we knew we could win that game.”
What set SR apart from other schools: “The size of the school, and classroom size, I started reading about colleges when I was fifteen and my whole life I thought all classrooms were huge and when I read about Saint Rose I realized all colleges weren’t like that.”
Why SR basketball: “I was in a recruiting system and I sent my information to 3,000 schools. Saint Rose reached out to me. The coach, Brian Beaury, also was a factor because he made me feel like he cared for me. He wanted me to do well on the court, but also off the court. The coaches in this program showed they cared for me and that’s rare to find.”
How’d you got involved: “I was seven and my grandma noticed I needed something more than school so she sent me to do sports. I tried swimming to be fun which is weird, because now I don’t. I also snowboarded, but I gave it up for basketball so I didn’t injure myself when I realized I could play basketball. I stuck with it and got better. My mom was a hard worker her whole life so that’s why I worked so hard to get better. 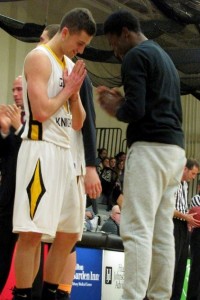 Uskans getting ready before a game

My Comments/ takeaway from the interview: Uskans is a very hard working and determined young athlete. He’s very self-determined to make himself better at the game he loves most. Uskans is very happy with the team and the choices he’s made that have him playing Golden Knight basketball. “People use to tell me I couldn’t play at a high level. I don’t let negative energy affect me, I turn it into positive energy,” Uskans said. He’s clearly learned to turn criticism into motivation. He’s developed into a great overall person and is adjusting to the lifestyles here in the U.S. He’s been helped along by his teammates on and off the court helping him adjust. “My teammates taught me how to talk, what not to say, learn a new language and they’ve become a family to me,” Uskans had to say about his teammates. He gives his all on and off the court to the benefit of himself and his teammates. He really treasures his teammates and all they’ve done for him. He’s a great young man with a wonderful personality. He’s one of those people that if you tell him he can’t do something, he’ll go out and do it to prove you wrong. 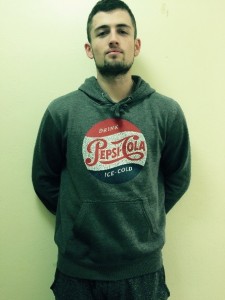 Uskans in his residence hall

← Sucks to be Sick
Snowy thoughts →