“My own Road to Damascus” 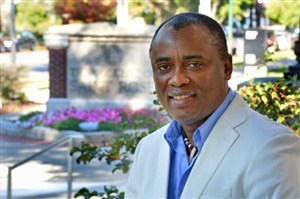 Marda Mustapha wanted to do something to assist the people at home in Sierra Leone who were quarantined and not getting food. He turned to the Saint Rose community, got help, and now looks forward to assisting survivors in the aftermath of the Ebola epidemic.

Marda Mustapha, a Saint Rose associate professor of political science, recently returned from a visit home to Freetown, Sierra Leone, to deliver food to his parents’ village, which was quarantined because of Ebola. He did so using funds collected at Saint Rose, from the St. Joseph’s Provincial House and various other organizations in and around Albany. The experience moved Mustapha from a feeling of anger and helplessness to a commitment to care for survivors as the epidemic continues.

Here, his thoughts about the trip and what led to it:

On turning around despair: There were stories that people quarantined weren’t getting food because of government corruption. I was feeling so helpless. It was (Assistant Professor of English) May Chan, who emailed me and said, “Marda, I know your family is from Sierra Leone. How are your parents doing? What can I do?”

That was the question that made everything happen: “What can I do?”

I wanted to collect food but Father Chris (DeGiovine, former dean of spiritual life) said, “It’s going to be very costly to ship.” He said, “Collect money and buy the food.” I said, “I want to be there. I want to be sure it gets to the people.”

On how he knew things had changed: When you get off the plane they take your temperature at the airport before you even have your passport stamped. And you fill in a form with your phone number and they give you a hand-out about the symptoms of Ebola. Then you go wash your hands with chlorinated water before you enter the country.

You get the sense that something is different right away.

On the holidays that weren’t: The tradition is that everyone, Muslim and Christian, spends New Year’s Eve in church. They go at 10 p.m. and make sure they are in church when the new year rolls in. Then, after midnight, it’s a big celebration.

But this time around that didn’t happen. The government ordered churches to end services by 5 p.m.

Normally, people have weddings in December. But there were no big wedding parties. It was very subdued because of Ebola. When people congregate in large numbers it might spread the virus.

On the vast amount of death: It is difficult to imagine until you’ve seen it. You hear the ambulances, they call them burial teams and you see them going past every few minutes.

They ran out of space to bury the Ebola victims at the Kingston Cemetery. It was that serious. Then, people started leaving dead bodies out on the street. In some instances people who truly loved their relatives would take care of them even after they died and that’s how they got infected.

Normally you call “117,” which is the Ebola emergency number, and the ambulance would come. But if the burial team did not show up and the dead body was in the house, relatives would wash the bodies of their loved ones – an action that exposes them to infection. The virus is most active in dead bodies.

You got the numbers every day, “This many people are dying in our country.” When you see people dying every day it changes your outlook.

On the suspicion: One thing that really stood out was the suspicion. Everybody was suspected of having Ebola. People were saying “you only get Ebola from people you know,” and what that does is throw apart social communities. People were sometimes more suspicious of people closest to them. When they explain their rationale, it made sense. You’re not going to shake hands with someone you don’t know in such a situation.

My nephew’s wife died of Ebola and their house was quarantined. He needed money to go to the hospital but I didn’t allow him to come to the house where I was staying. I dropped the money off at his sister’s.

On his family: When I go home I usually visit all family members. I didn’t see my parents this time around. They were quarantined. This time I didn’t visit anyone. I did not leave the city. 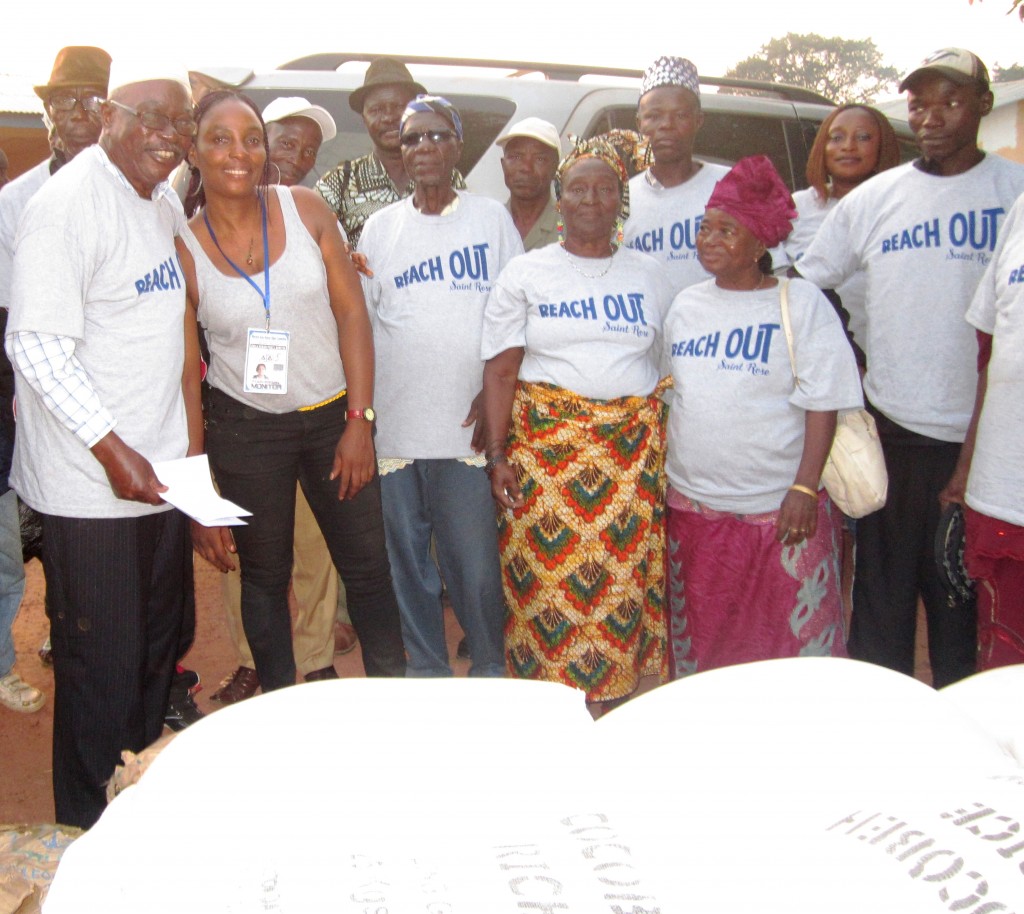 Mission accomplished: (from left) Eric Mustapha-Ngabeh V, chief of Peje West, with his daughter, Juliana Mustapha, and wife, Doris Mustpaha, show their appreciation for the bags and bags of rice and other food delivered to their quarantined region of Sierra Leone, using funds collected at Saint Rose.

My father succeeded his elder brother as Paramount Chief of Peje West, about 250 miles from Freetown. As many as 50 villages make up his chiefdom.

Villagers come to the house and say, “This is my problem and I beseech you to find a solution.” He can’t say, “I can’t do it.” 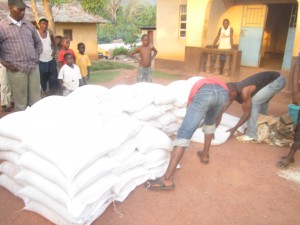 It was a long journey from the Saint Rose campus, where the Sierra Relief Fund was set up, to the Peje West chiefdom in Sierra Leone, where food purchased with the donated funds was distributed. Shown here, a main staple: rice.

On getting food to people who needed it: I paid for the food at a store in Freetown and the order went to another branch, to cut on transportation costs. We had about $3,800. We bought about 125 bags of rice, cooking oil and fish – they can’t eat game anymore because of Ebola. They filled a van the size of a small U-Haul.

I didn’t go. My sister Juliana Mustapha took the items to the village. She is a human rights activist who has a pass to get through the quarantine.

My father was so happy that he said, “I hope more of our children can go to Saint Rose!”

On what’s next: We need to start thinking about post-Ebola in Sierra Leone. I have founded a charity called Global Relief for African Communities in Emergencies (GRACE).

Ebola is not over but it is waning and in its wake a lot of teenage orphans are taking care of their families. Our first project is to see if we can help care for those orphans. People ostracize them. We are going to do a documentary of two orphan-headed households we want to help in the slums of Freetown.

I don’t want to wait until the next emergency comes and then be caught helpless. Father Chris has agreed to chair the board. Professor May Chan, Professor Vaneeta Palecanda have agreed to serve on the board because they’re the ones who actually started talking to me about this. 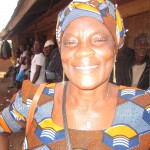 Jamie Kpange, representative of the Peje West Chiefdom, is among those who expressed gratitude for the delivery of food and provisions from Albany, New York.

Sometimes if you are in the crowd you don’t see what is happening as well as someone outside looking in. Going home and helping out makes me feel that a burden has been taken off my shoulders. This has been my own road to Damascus.