Good to know: hard work in the pool and in the classroom net Saint Rose swimmer Caitlin Brauer national award

One of the College’s most decorated individual athletes has just been named one of the  top women athletes in the country.

Caitlin Brauer, who graduated in May with her masters in accounting  – completing her undergraduate and graduate degrees in four years – was named a top 30 2013 Woman of the Year honoree. 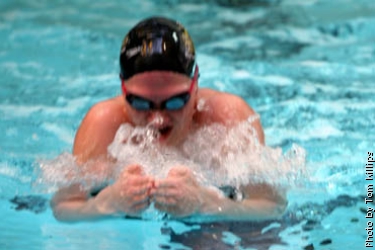 Is it something in the water? Caitlin Brauer ’13 owns no fewer than seven College swimming records – and now acclaim as one of the country’s top female athletes. But the women’s swimming team overall has high standards.

The honor, announced Tuesday in NCAA headquarters in Indianapolis, goes to just 30 athletes selected from 450 nominees. It recognizes Brauer’s outstanding academic performance as well as her acclaim as a college swimmer.

Ten women from each of the three divisions make up the top 30, spanning various NCAA sports. In September, three finalists from each division will be selected to form the nine finalists for the award. The 2013 Woman of the Year will be announced at an annual ceremony in Indianapolis on Sunday, October 20.

Brauer, a Clifton Park native, is arguably the College’s finest female swimmer, owning seven school records; in the IM, freestyle, breast stroke and butterfly. That’s on top of her participation on four record-setting relay teams. And, she qualified for the NCAA Championships in all four years. The College Swimming Coaches Association of America recognized her as Scholar All-American for the past three years.

Maybe it’s something in the water, but Brauer’s success mirrors the team’s high standards and work ethic. Brauer was one of four seniors on the team and all four graduated with perfect 4.0 GPAs. Collectively the 12 swimmers, whose academic interests run the gamut, attained the highest GPA of all 87 Division II swimming and diving teams.

“As swimmers, they have the drive to be the best they can be,” Keith Murray, head coach of the women’s and men’s teams said recently. “But we want them to stretch that out to the real world. We don’t want them to be good at just one thing.”

The 2013 graduates have followed impressive college careers to jobs in their field or graduate school. Among them, Brauer, secured an accounting job at UHY Advisors in Albany  before graduating (a year early, with graduate honors,) with  both a bachelor’s and master’s degrees in accounting.

She came to the company’s attention last fall when she spoke during dedication of the Huether School of Business. Richard Kotlow, the accounting firm CEO, immediately invited her to interview.

“I owe it 100 percent to Saint Rose,” Brauer said recently from her desk at the downtown Albany office. “My whole college experience is a great story.”

← Good to know: Public health minor a pathway, not just a degree
Planning for Diana →