Is it possible to hear the Christmas in Vince Guaraldi’s music without also picturing Snoopy and Linus and Charlie Brown?

“Without Charlie Brown, none of that music would exist and most people would not know who Vince Guaraldi is,” noted Sal Prizio, concert programming manager at The College of Saint Rose and a lifelong fan of “Peanuts” and the music interwoven into the strip’s television specials.

True enough. But how did Guaraldi’s nearly lyric-free and somewhat contemplative compositions for piano, bass and drum tread into “Winter Wonderland” and “Jingle Bells” territory?

Fans of all things Charlie Brown will have a chance to think about this on Sunday, December 2, when “It’s a Jazzy Christmas!”, Prizio’s second annual holiday concert, is performed at the Massry Center for the Arts. There will be two shows, at 3 p.m. and 5 p.m. 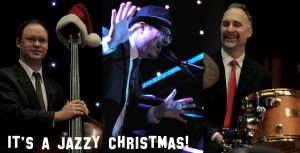 Vince Guaraldi’s jazzy sounds, heartbreaking and whimsical, serve as a character in “It’s a Charlie Brown Christmas.” The composer, like Charles Schulz himself, seemed to understand that childhood – even Christmas – isn’t all fun and games.

Like last year’s “Jazzy,” the locally based Peanut Gallery Jazz Trio covers Guaraldi’s score of the famous “Peanuts” Christmas special that first aired in 1965.  This year, the story moves around the world. A visit to Cuba will provide the backdrop for a mambo-inspired “Jingle Bells” and a stop in Israel nets a jazzed up “I Have a Little Dreidel.”

But it is Guaraldi’s Christmas music that will be the main attraction. In the same way that the smell of baking cookies evokes the family kitchen, his compositions, equal parts whimsy and melancholy, trigger a picture; Linus ice skating with his beloved blanket around his neck or Schroeder hovered over his boy-sized piano. The Peanuts gang under the stars, circled around the tiny tree they have decorated.  In “A Charlie Brown Christmas,” sound and sight are one.

The composer linked to the holiday directly with “O Christmas Tree” and “My Little Drum.”  But “Linus and Lucy,” arguably the television show’s most famous song, is entirely void of a Christmas-y reference. Its boogie piano repetition does not exactly convey the sweetness of snowflakes or tinkling bells that the others pieces do.

“‘Fur Elise’(Beethoven sonata) and the ‘Greensleeves’ theme (English traditional) are now associated with Christmas because they’ve been  played with the Charlie Brown special the week before Christmas for the last 40 or 50 years,” said Mike Lawrence, ’03, the bass third of the Peanut Gallery trio. “They hear the music and think of the overall production.”

Guaraldi, a San Franscico composer and pianist who died in 1976 at age 47, might be surprised “Linus and Lucy” has joined the list of anthems radio stations loop continuously from Thanksgiving to New Year.  Then again, his entrée into the Peanuts franchise was itself unlikely.

The story goes that Charles Schulz insisted the televised adaptation of his strip reflect “the true meaning of Christmas,” a departure from the secular norms. Several well-known composers invited to write the music were not available. Then, on a taxi ride across the Golden Gate Bridge, the show’s producer, Lee Mendelson, heard a Guaraldi composition on the radio and soon contacted him about scoring a Charlie Brown Christmas program. Guaraldi jumped at the chance.

Jazz had never been used to accompany a cartoon before. In an interview, Mendelson said that neither he nor his bosses at CBS were particularly pleased at first with the final product. The music was slow, highly religious and a tad solemn for a children’s story. There was no time to change. Adding to their anxiety, a Time magazine music critic showed up a week before airdate for a preview.

He wrote a rave review, an estimated half the television-owning public tuned in to the Christmas special and CBS ordered more Charlie Brown shows. Guaraldi would go on to write music for 17 Charlie Brown specials.

Prizio said the pairing of visuals and music resonates so fully because Schulz’s insights about children were trailblazing. First, he noted Schulz did not shy away from a holiday story that is patently religious.

“There is the whole scene where Linus quotes the Bible. The TV executives freaked about and said ‘you can’t do that.’ He said, ‘yes you can.’ And it worked. People weren’t offended,” noted Prizio.

In addition, Schulz knew full well that children are capable of feeling other than “Jingle Bells-y” about Christmas. In one scene, Linus questions why Charlie Brown feels blue during the holiday – a feeling many adults and children can relate to. The music picks up the sentiment.

“Vince spoke through the piano,” said Prizio. “The left hand might be the sad part. The right hand picked up the whimsical nature. In the end it’s got the depth that Charles Schulz intended and you have something intended for children through the sensibility of an adult. The music became a character in those shows.”