Good to know: keeping on the right side of the (copyright) law

You overslept for class but, luckily, a friend recorded the professor’s lecture. You’re preparing a presentation for an academic conference and your PowerPoint includes music clips that you downloaded. You are an R.A. and you plan to show a DVD from Netflix to students in the residence hall.

Each of these users is, potentially, a law breaker, according to John Ellis G ’90,  director of Information Technology Services at The College of Saint Rose, and College compliance officer for the ever-more vexing digital copyright regulations.

Those rules, which actually have their basis in the U.S. Constitution, recognize that music, text, video and photos are easily lifted from the Internet without payment or permission. Colleges are given more latitude than general consumers to use digital content freely. But determining when fair use enters infringement territory is not widely understood. Keeping up is nearly impossible because the technology keeps changing.

“I have been to literally dozens of workshops and the more I go to and the more I learn, the less confident I am that I understand it,” said Ellis, who calls monitoring copyright the least enjoyable part of his job.

In truth, he understands quite well. The rules let college students use online materials in snippets, guidelines suggest, perhaps 30 seconds of a song, or 10 percent, to augment academic inquiry or creative expression. But beyond acts of piracy – say, copying an e-book without paying – legal educational usage can depend on what, how much, in what setting and for what purpose.

“A lot of people think they are on a college campus, it has to be okay, because we are educating,” Ellis noted. “Or they think that because it’s on the web, it’s available for free. But it all depends who owns the copyright and how you intend to use it.” 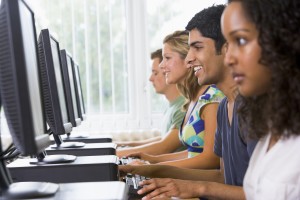 They look so innocent. But college students who use video, film or music from the Internet in their studies might be law-breakers because the laws are so difficult to understand. (Photo credit: www.photospin.com)

A new Copyright Policy Committee, made up of 16 faculty and staff members, will clarify such matters as they revise practices for the for the first time in a decade. Ellis welcomes input.

The complexity of the task became apparent at a recent session of ProVisions, the lunchtime professional development series, where Ellis, Prof. Ian MacDonald, chair of the computer science department; and Associate Prof. Kim Middleton, the English department chair who teaches film studies, tried to untangle the nuances.

“The questions are tough,” acknowledged MacDonald. “It’s easy for students to record your lecture. Does that mean we are going to see a headline “Thirty two students in Albany cited for sharing college notes?”’ *

– Federal copyright laws recently exempt college professors from encryption requirements when showing films. So were students – if they  major in film students. Everyone else must continue to honor encryption policy governing DVD usage.

– And, the professor who may skirt encryption may not ask Ellis for help if it doesn’t work. His office is not exempt from encryption circumvention requirements.

– The professor may screen “Schindler’s List” in class but not necessarily at a campus wide event in St. Joe’s Hall, without paying for public performance rights, which cost from $400 to $800.

– He or she may include a clip of music in a classroom presentation – but usage rules change outside the classroom setting, including at professional conferences.

– Online tools used to teach children – such as Scratch and Alice – are widely available for free so kids can easily log in. But not kids who use Macs. Apple has rejected their open source use.

The College receives several infringement complaints a year from outside watchdog groups but so far has not had to go beyond discussing the infraction with the offender – a requirement of the law. But lest anyone feel tempted to take a gamble, Ellis reminds them of the price violators pay: the person in Massachusetts fined $765,000 for using 31 songs without permission, the violator in Poughkeepsie fined $7,000 for illegally sharing an e-book.

“We have never had to offer a second reminder. We tell them you can be fined up to $150,000 per violation and the average settlement is $3,000,” Ellis said. “We have it directly from our administration: we do not want to be a test case.”

But he and his colleagues warned of another danger just as bad as the big fines: and that is being too afraid to push the rules to their limits.

“You should activate your fair usage as a right of digital citizenship,” said Middleton.“If they only exist in a legal document we don’t secure those rights.”

Ellis agreed – and said that understanding the rules is one way to push back against challenges. Advocates of tougher copyright, after all, represent a strong lobbying group in Congress.

“If we don’t exercise our fair use rights they’re going to go away,” he observed. “Copyright keeps encroaching and we could bring a challenge but we don’t and our rights are diminishing quite significantly.”

*(Maybe, or maybe not, says Ellis:.”You have to look at the different factors. He or she would own the copyright If he doesn’t object it should be alright.”)