Good to know: Midnight Eats: not just burgers and fries

by Jane Gottlieb on February 8, 2016 in All About Saint Rose, Good to Know · 0 Comments

There is a new late-night place to grab a bite at The College of Saint Rose. And students got to select the name – Midnight Eats Grill – and choose the menu, a line-up of dishes that goes well beyond burgers and fries. Margherita flatbread pizza, pulled pork ciabatta, vegetarian nachos, bistro haddock sliders, chicken wings and sweet potato fries are on the menu, along with salads and several varieties of burgers. 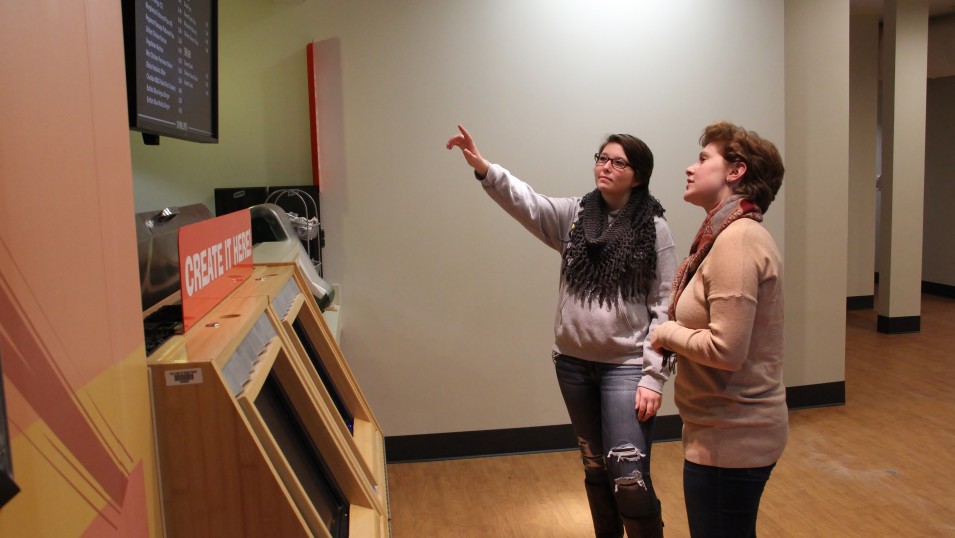 Kari Hendrickson and Carly Weller will consider their choices.

Midnight Eats, which opens nightly at 7, replaces the Burger Studio on the ground floor of Centennial Hall. It stays open until 11 p.m. Sundays to Wednesdays and until 1 a.m. from Thursday through Saturday. Most dishes cost from $4 to $6, and Saint Rose students can apply the declining balance of their meal plans.

And they don’t just get to weigh in on the menu:

“We get to change it,” noted Ellen Praught, a sophomore who heads the food service committee for the Saint Rose Student Association. “We can see what works and change the menu any way we want.”

Also new is an adjoining seating area that can be used for meetings, music and student study groups. The space, equipped with a small stage, podium and movie screen, replaces a food market. While outside groups can reserve it, Saint Rose students get priority. The Student Association already has begun holding its meetings there.

Student Association President Carly Weller and Kari Hendrickson in the new event space. It used to be a convenience store.

“I would not be surprised Super Bowl night if there is a big crowd here,” said Kim Lynch, director of conferences and events. “This is good for the students as a whole.”

The hope is that the food, seating and meeting space will feel different from the other campus venues where students eat, socialize and hold meetings and events.

“The food is different, it’s open later and it’s the only place on that side of campus,” said Praught. “For sure it is a lot more convenient for anyone who lives there, especially at Centennial.”

It was ARAMARK, the company that manages campus dining, that suggested a new menu and a student-centric approach. Rich Meigel, director of dining services, said ARAMARK has paid for the renovation of the grill and the adjoining meeting room. Meigel approached the Student Association last fall seeking input for an eating spot students could hit after night classes or events. He recommended a customized menu over an ARAMARK format, which is less flexible.

Praught brought the opportunity to the student body – and got plenty of feedback. Her committee distributed online surveys and learned, for one thing, about the burger and fries fatigue that seems to have set in. She solicited suggestions for alternative pub fare. Flatbread pizzas and wings topped the wish list, along with pulled pork sandwiches and steak fries.

“They didn’t want to put a new name on the same burger place,” Praught explained.

Then there was the question of what the place actually should be named. Students were really vocal about this, it seems, and Praught received 50 suggestions and sent out a survey. She got back 1,807 votes for the top 10.

Midnight Eats Grill easily placed first, though there is still some discussion over whether that should be “night,” or “knight,” to promote the College’s Golden Knights 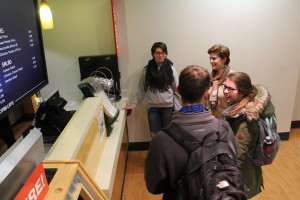 mascot. Regardless, Praught is grateful the runner-up, Happy Grill More, didn’t make it – something

← Hello From the Other Side…of the RA Selection Process
Graduation: What I Wish I Understood →