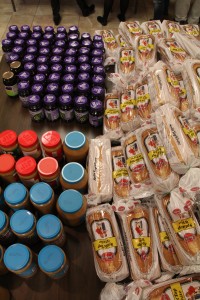 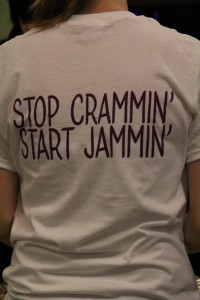 The fifth edition of PB& Jams had more of everything: More volunteer help, more community support and, most important, more sandwiches to serve to people in need in the Capital Region.

“We made 3,594 sandwiches.” said Ellen Praught, a Saint Rose sophomore who co- chaired the annual student-centric marathon held earlier this month. “There are 3,000 homeless people in Albany. So we made enough sandwiches to give one to every homeless person and then some. It was a pretty awesome feeling to know we did that.”

“And we finished early!” added co-chair Tim King, as volunteers showed up only to be told that the goal had been met. “It doesn’t get much better than that.”

It’s hard to argue with the numbers: more than 25 students (up from 10 last year) served on organizing committees for the 2015 “Jams.” Between 300 and 400 volunteers showed up to slather jelly and peanut butter, and pack up sandwiches. The sandwich count was up 3,250, as two hours was shaved off the sandwich making detail.  And seven hours after the first sandwich was made all 3,594 were delivered to seven local shelters. 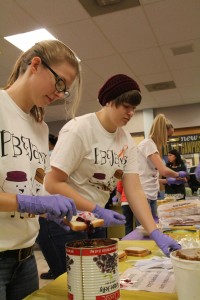 With the funky t-shirts – new this year – tunes blasting and overall party atmopshere, “Jams” is really hard work disguised as fun. It is not easy getting the right ratio of jelly to peanut butter, calculating the number of loaves of bread that will be needed so no PB or jelly is stranded. Even staffing levels are key, as are donations of food and money. An advertising committee, a shelter outreach committee and a donations committee devoted months to mapping out the details. The Student Association executive board played a strong role.

At the end of it the campus lounge was spotless and piles and piles of sandwiches had been deployed.

“Saint Rose is a huge community service school  and everyone on campus loves making a difference,” said Praught, who already has ideas for PB&Jams 6. “We see a need and focus on just getting it done.” 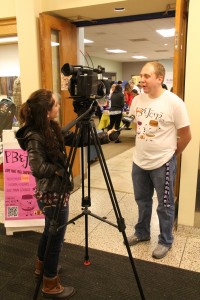 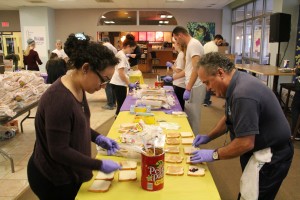