Good to know: putting the “friendly” in military friendly

Vince Soldani never saw himself studying toward a four-year degree. Instead, his plan was to join the Navy and train to become a SEAL. At age 23, with an associate degree under his belt, he enlisted and served as a gunner’s mate, second class. Then, he got word that the service was no longer accepting SEAL applicants from his class year. He was devastated.

“I figured the next best thing would be to join a tactical team for a law enforcement agency,” Soldani, now 30, said recently. “And to make myself most marketable for those jobs, I would have to continue with my education and get at least a bachelor’s.”

Saint Rose was an ideal choice given the small class size and emphasis on teamwork, a hallmark of military life. And since he started nearly three years ago, he says the College has only become a better fit.

“When I came, the College was certainly on track to becoming a ‘military friendly’ school,” said Soldani, a criminal justice major who will graduate in December. “But today I think you’d be hard pressed to find another college campus in the United States that has put the energy and funding into helping veterans. This college has fully committed to making our time here much more comfortable.”

In the past year, military enrollment has nearly doubled from 57 to 110. Students represent every branch, along with the children and spouses of those who have served. Making the growing participation all the more impressive is the fact that so many students with a military background, like Soldani, had never pictured themselves in college.

“The classroom just wasn’t where learning took place for me. I didn’t know how to study and I wasn’t interested,” he explained. “When I went into the military, I advanced quickly and did very well for myself. That’s where I excelled. Most of my learning was either on-the-job or hands on. I feel that most of the guys and gals I had the opportunity to work with in the military are in the same situation.” 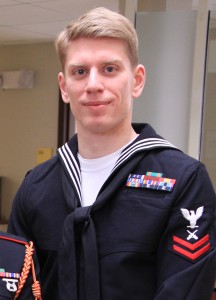 If college already seems out of reach for members of the service, the high tuition and lack of familiarity with financial aid don’t help. And without a plan B many returning veterans experience a significantly higher than average unemployment rate when the job market softens, and find themselves at risk for poverty and homelessness.

Now, the federal government has stepped in, with a new G.I. Bill that offers the best opportunity to finance education since World War II. The measure covers tuition and fees, provides a housing allowance and a stipend for books, essentially taking money out of the equation.

At Saint Rose, the response has been fast and significant. A new Office of Veteran Enrollment works on outreach, helps students leverage veteran benefits and find other supports. Saint Rose also participates in the Yellow Ribbon Program, under which the 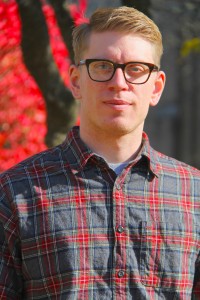 Double duty: Doubts about college are long gone for Vincent Soldadni, a veteran and student who says Saint Rose provides a warn welcome for members of the military.

College and U.S. Department of Veteran’s Affairs share student costs that are not covered by the G.I. Bill.The College now accepts up to 15 credit hours of military training, has established a chapter of the Student Veterans of America, provides free parking and waives other fees. Students have begun offering military style fitness training and have worked together at the local veterans’ hospital.

Joshua Terry, a junior graphic design major who is a member of the Marine Corps Reserve, said it is important for veterans on campus to connect with one another.

“What sets us apart from other students are life experience and professional qualities. I can usually tell a vet from a civilian just by seeing them interact on campus,” said Terry. “We are so used to the regimentation, brotherhood, and structure of the military so when we get here it’s easy to feel alone. Luckily, we have the Student Veterans Association, which is very convenient especially when you have something on your heart or mind that you need to talk about with a fellow vet.”

In recognition of its efforts, Saint Rose has been included on the list of “Military Friendly School®” by publisher Victory Media for five years in a row.  And before even making the changes the College convened a panel of veterans and asked them what they needed. The answer: a single individual to oversee the needs of veterans. The result was the hiring a year ago of Mark Sollohub, the first coordinator of veteran affairs. Sollohub divides his time between recruiting and working with students. 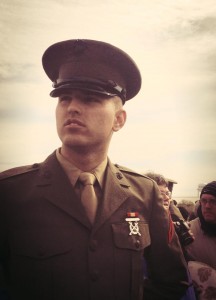 He often encounters veterans who are wary because of the for-profit colleges that have engaged in abusive recruitment tactics. In addition he sees veterans who are eager for a job and not interested in spending several years working toward a degree. He tells them that since the G.I. Bill covers tuition and housing, college can make more financial sense than immediate employment.

“I tell them that our school poses different opportunities, a brick and mortar atmosphere, a high faculty to student ratio, regional accreditation, strong career outcomes,” he noted.

“We want them to know that if they come to Saint Rose we’ll see them through a successful military to civilian transition. These people have given their lives in service to their country and it is part of our mission to support them.” 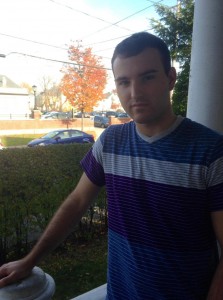 Joshua Terry, a United States Marine and Saint Rose graphic design major, says it is essential for colleges to provide opportunities for students who are in the military to connect with one another.

It helps that he has been in their shoes. The Niskayuna native spent nine years in the Navy aboard the U.S.S. Dubuque, which was based in San Digeo, California. As ships’ navigator his extended  deployment included a security operation in Iraqi territorial waters. He is familiar with the close bonds military members form, the skills they develop and the wounds they might come home with.

“These men and women bring different challenges as well as skills and experience and cultural competencies,” he said.
Sure they have challenges that are unique. But they’ve traveled the world and seen things the average student has not. ”