Good to Know: religion-politics NOT a rocky relationship

by Jane Gottlieb on October 5, 2012 in Good to Know, The College of Saint Rose · 1 Comment

During his week-long residency at The College of Saint Rose, retired U.S. diplomat Stevenson McIlvaine stopped off at Associate Professor Jeff Marlett’s theology and politics class in Albertus Hall.

“Theology and politics, what a mix. Think of all the trouble the world has gotten into,” opined McIlvaine, who was posted in Congo, Somalia, Egypt and South Vietnam during 20 years with the Foreign Service.

Then, he and Marlett became serious and agreed: “Well, not really” to the notion that religion-politics adds up to a lethal cocktail.

Religious affiliation, diplomat and professor concurred, is more often than not a scapegoat for unprovoked anti-American violence of the variety that killed Christopher Stevens, the U.S. ambassador to Libya. They doubted, for example, that protests against disrespectful drawings of the prophet Mohammed had a lot to do with the rocket attack that killed Stevens and three others.

“It’s more about poverty and ‘why is my life so miserable’ and here is my chance to strike on America,’” noted McIlvaine, as Marlett nodded before a class of two dozen or so students.

Plus, as McIlvaine doubtless said more than once in four days of visits, talks and the formal Vickery Lecture, there is a lot more to know about people than the us versus them scenario that tends to surface when terrorists attack Americans.

“Islamist militants who would cheerfully murder anyone they disagree with would not demean Jesus,” McIlvaine said softly, naming just one example of what is not intuitive to westerners. “Freedom of speech, even freedom to be insulting, is alien to them. Doing so is really the exception.” 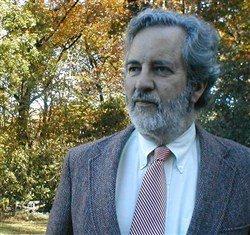 The retired Foreign Service officer was at Saint Rose – his first visit to upstate New York – as a Woodrow Wilson Visiting Fellow. The program brings prominent artists, diplomats, business leaders and journalists to colleges for week long residencies in order to link the academic world to the world of practical application. Bearded, relaxed and speaking in a quiet voice, McIlvaine was not flashy about his credentials – which include the fact that he was running the Somali embassy in 1994 when 18 American soldiers in Black Hawk helicopters were shot down and killed during an unsuccessful raid intended to weaken Somali warlord Mohamed Aidid.

McIlvaine listened carefully to questions and was prone to ponder, as when one of Marlett’s students  asked him to speculate on what contact the United State would have had with Afghanistan if not for the attacks on the World Trade Center. “I’ve never thought of that,” he said humbly. “We had already given up on Afghanistan.”

But on certain points he was firm. Among them, the need for young people to get acquainted with the world beyond American shores. Our track record on this front has not been strong, he noted, listing the lack of translators in Asian and Arab countries, an ignorance of customs and lack of understanding of a non-western society until an act of aggression puts it on our radar. He could not overstate the importance of seeing the world from another perspective.

Marlett followed up. He asked the class to consider a decision by the U.S. military to use dogs to help secure mosques: Answer: “Muslims think dogs are foul, dirty. Bringing them to a mosque is not good form.”

In addition, McIlvaine was anxious to promote his idea – which ruffled some feather during the week – that American armed forces engage in actions on humanitarian grounds.

He urged students and professors to consider the ethical obligation to help in Rwanda, Bosnia, Somalia and elsewhere, in addition to our need to protect natural resources or uphold our security.

The American effort to abate a famine in Somalia was widely viewed as successful until Black Hawk Down, and televised atrocities that followed, compelled President Clinton to withdraw from that country.

“Suddenly, Americans were paying attention to Somalia and it was all bad,” he recalled, 18 years later.

1 comment for “Good to Know: religion-politics NOT a rocky relationship”