by Jane Gottlieb on September 13, 2012 in Good to Know, The College of Saint Rose · 0 Comments 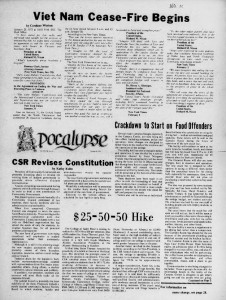 This front page, from Feb. 1973, reflects the more activist leaning of Saint Rose students than the student journalism practiced in 1952.

The College archives, housed in the Neil Hellman Library, has just digitized Saint Rose student newspapers and magazines from 1921 to 1970. Exhibiting a variety of titles and journalistic styles, the materials join a digital collection of oral histories, photographs and maps that piece together the story of this once-tiny women’s college housed in a single building.

“You get to see what 18 -to 21- year olds are like in all different eras,” said college archivist Maria Kessler McShane, who should know since she oversaw the conversion of 403 newspapers and 40 student magazines.  The digital archive is available at: http://library.strose.edu/archivesdigitalcollections.

Users can now search for a topic, say “World War II,”  rather than go through boxes of publications in the third-floor archives. Saint Rose publications also join WorldCat.org, the online catalogue of virtually all materials all libraries own.

A third benefit reflects one of an archive’s fundamental purposes:

“Original materials that aren’t handled as much can be properly stored and preserved,” McShane said.

Saint Rose student publications date to its founding in 1920, but the first full newspaper, The Arrow, launched in 1936. Successors include Rosaverian, Inscape (two times) and Apocalypse, a 1973 incarnation apparently named to reflect a more activist tone, including a pledge to “gell it like it is.”

There was also The Gadfly, The Chronicle, Saint Rose Chronicle and, once again today, just “Chronicle.” The early newspapers are devoted to religious topics, including descriptions of Catholic services and news from the Diocese.  A formal, nearly courtly style informs the writing as reports on campus events – including pageants, glee club performances and  summer travels – gradually give way to news about the College and beyond. The writing grows decidedly starker by the 1970s as student journalists use the pages as a call for action, on and off campus, including a demand that President Nixon end the Vietnam War.

The evolution of college, and country through the century will become more apparent when McShane completes the job and posts titles for the past 40 years. 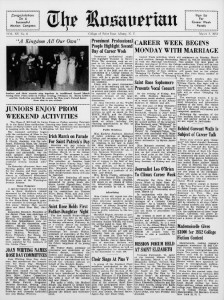 From 1952's The Rosaverian, as it was known, concerned itself with somewhat mellower issues.

“The thing you see through all of this is the students’ energy and involvement,” said McShane, who oversees a repository that includes academic regalia, china ware and dance cards, along with the paper records. “While they wrote about college life, our students also wrote a lot about local and national and world events and issues.”

History-bound items have been set aside since the College’s founding, though the archive itself wasn’t established until 1990. Materials come largely from the college departments and alumni. And McShane has feelers out much of the time, seeking copies of programs and other keepsakes that might not be considered especially historic at the moment.

She acknowledges that posting records on the Internet stands to limit actual physical visits to an archives. But McShane believes digital access actually builds interest in history since users can so easily obtain information they are excited about.

She also cautions anyone who stores photos and documents on their computers and smart phones not to assume they will last forever. McShane finds students are often surprised to learn Facebook is not permanent.

“Nothing digital is considered of preservation quality,” she noted, advising people to back up files and make quality prints of the most important.  “The only real way to preserve anything is to store a hard copy and with microfilm and a good magnifying glass.”