Good to know Saint Rose Commencement Preview: A new song (or two) for a new president

Nicole DeMarco, a College of Saint Rose senior, had not yet met David Szczerbacki, the Saint Rose president, when her professor asked her to write a song commemorating Szczerbacki’s inauguration. DeMarco has been writing songs since childhood and plans to make this her profession. She came to Saint Rose to learn the fundamentals of music theory, production, performance, recording and marketing.

So, before writing a tribute to the ninth president, DeMarco did her due diligence. She brushed up on Saint Rose heritage dating to its founding in 1920. She learned Szczerbacki enjoys walking, that he is a scholar of urban planning and a big fan of cities. She read his words about higher education and was struck by these, in a campus address:

“Can we as a nation, put value on the life of the mind? And ignore the price we pay to find, ourselves within these lines …” 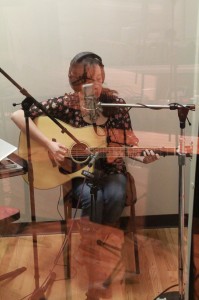 “Before” picture: Saint Rose senior Nicole DeMarco during a January recording session of the inaugural tribute to President David Szczerbacki that has now become the College commencement song. (Photo by Benjamin Marvin.)

DeMarco sewed the thoughts together and wrote “Toward the Light,” a rock-tinged anthem which ties in Saint Rose and Albany history, as well as Szcerbacki’s hopes. DeMarco and several other students performed it at a gala the night before inauguration in the fall. Her music industry professor, Sean McClowry, decided that the song should not be retired after just one gig and enlisted students in producing a full-blown professional recording in the College’s Hearst Center for Communications and Interactive Media.

Next, Steven Musso heard the song and he had an idea. Like DeMarco, Musso is a senior and a music student. He asked if the Saint Rose Chamber Choir might perform “Toward the Light” at commencement in place of the college song that has been a graduation staple. Professor Michael Levi, the choral director, agreed. So did DeMarco. Musso took on the task of arranging the piece as a choral work.

On Saturday, he and DeMarco will each graduate. Near the end of the ceremony, after degrees are conferred, the 40-member chamber choir will perform “Toward the Light” a cappella. DeMarco will be one of them. Musso will conduct.

“It is great to leave something behind,” said DeMarco, who noted she also penned her sixth grade graduation song.

“The way it worked out is perfect,” said Musso. “Nicole’s passion is songwriting. Mine is working with people and working with voices and we both get to use our own strengths at our own graduation.”

Added Levi: “They are graduating and they are leaving a legacy to the College, right when we have a new president.”

This is no small matter. On Saturday, “Toward the Light” becomes just the third college song sung at Saint Rose commencements. It replaces “Saint Rose – Song for a New Century,” which has celebrated Saint Rose graduations since music student Diane Wituszynski-Baltazar ’79 G ’82 won the honor in a songwriting competition around 1980.

And before that, commencement audiences had been hearing the College alma mater written by Winifred McGowan Quinn –for the first graduation in 1924.

“These songs reflect the style of their era,” said Sister Mary Anne Nelson, who founded the music industry program in 1981. “The 1924 song was written for all women’s voices and the key was too high for most people, including male students. The next one was a song for a new century. This one tells the story of where we were and where we are going. And it engages people of all ages.”

“Toward the Light” describes the vision of the Sisters of Saint Joseph of  Carondelet for a new college and then walks with President Szczerbacki as he continues the journey nearly 100 years later. DeMarco sings it in a straight tone voice suited to her blend of folk and pop reminiscent of Joni Mitchell.

It is a reflection of the talent and technology at Saint Rose that the college community will receive not just one but two distinctive musical gifts this week.

The first is the professionally produced recording Professor McClowry and his students created in sessions that stretched 30 hours through the semester. Students made the myriad decisions a specialized crew would make in a professional setting. “We looked at this as research,” said McClowry, seated in the control room during a session.

Through a window, DeMarco sang and played guitar. Another student, Drew Tirella, provided the percussion. Out of sight in another studio, Kevin Carey played an upright piano. The four – McClowry on electric bass – used headphones and laptops to collaborate on every note. 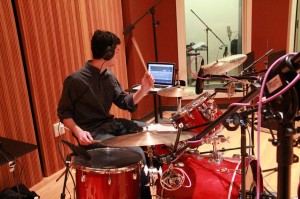 Saint Rose junior Drew Tirella literally watches the tracks of the song he and other music industry students record in January. The song, a tribute to President Szczerbacki, morphed into the College’s commencement song. (Photo by Benjamin Marvin)

On Tuesday, they gave a CD of the finished product to President Szczerbacki and invited him to hear it in the recording studio. Surprised by the gift, he was also moved to hear his words put to music. “In some way these words sound more relevant today than when I heard this song in October,” he noted nearly a year into his presidency.

On Saturday at graduation, he would hear the Saint Rose Chamber Singers present a very different take on DeMarco’s composition. To arrange it, Steven Musso faced the challenge of translating a simple pop tune into a work for dozens of classically trained voices, and no instruments. He decided to open the piece with a vocalization of DeMarco’s guitar picking. He incorporates a cajon – small percussion instrument – to pick up drum sounds. But his arrangement is as elaborate and strong as DeMarco’s is simple and soft. 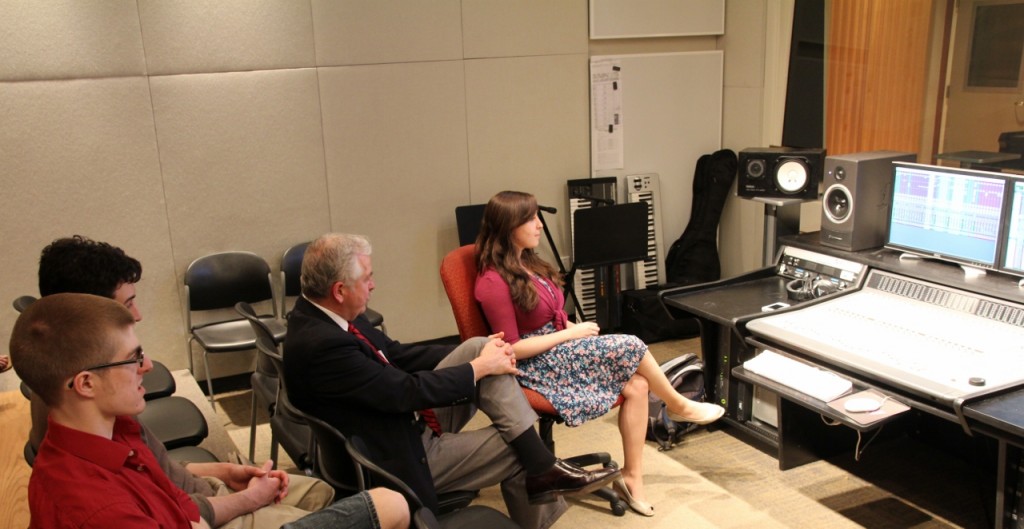 President Szczerbacki joins students Kevin Carey, Drew Tirella and Nicole DeMarco in The Hearst Center for Communications and Interactive Media Tuesday to “see” the tracks of the song, “Toward the Light,” the students produced and gave the president as an inauguration gift.(Photo by Benjamin Marvin)

And far more daunting than performing it to thousands of people at commencement was performing it before one – the woman who wrote it. Getting DeMarco’s approval meant a lot to Musso, who rarely actually meets the composer whose work he arranges.

“She is not from the a capella world and I didn’t know how she would feel about my arrangement,” said Musso, himself an aspiring songwriter. “She came to rehearsal to sing it and in the middle of it I said ‘I hope Nicole likes it!’ and she looked up and said ‘this is amazing and I can’t believe this is happening.’ It was a big relief.”

To hear Musso’s a cappella, click here: Toward the Light (Selection) 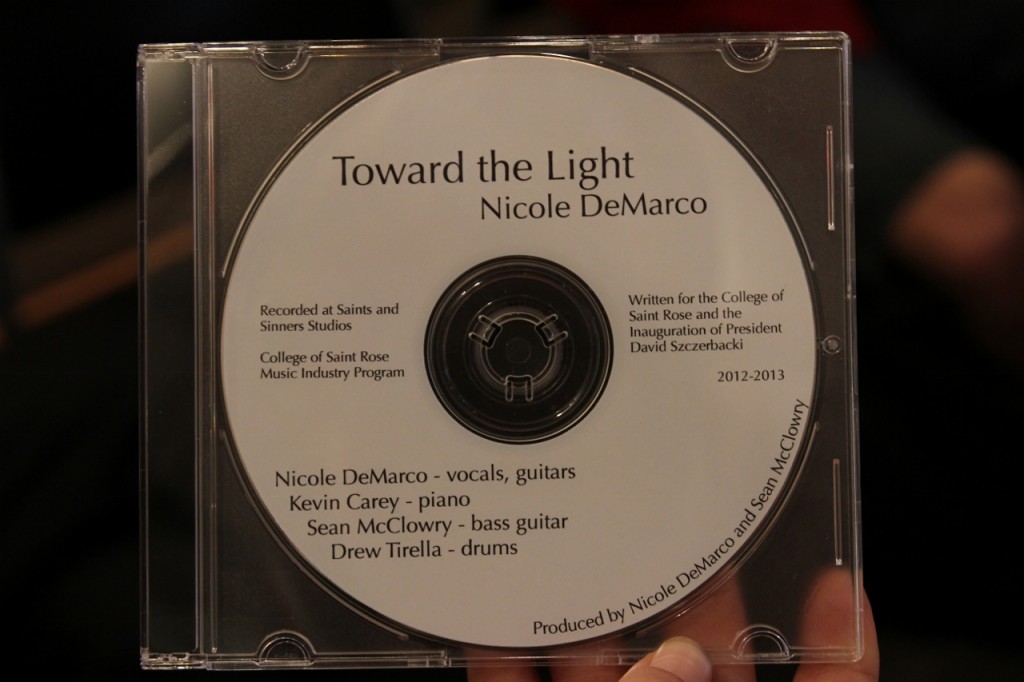 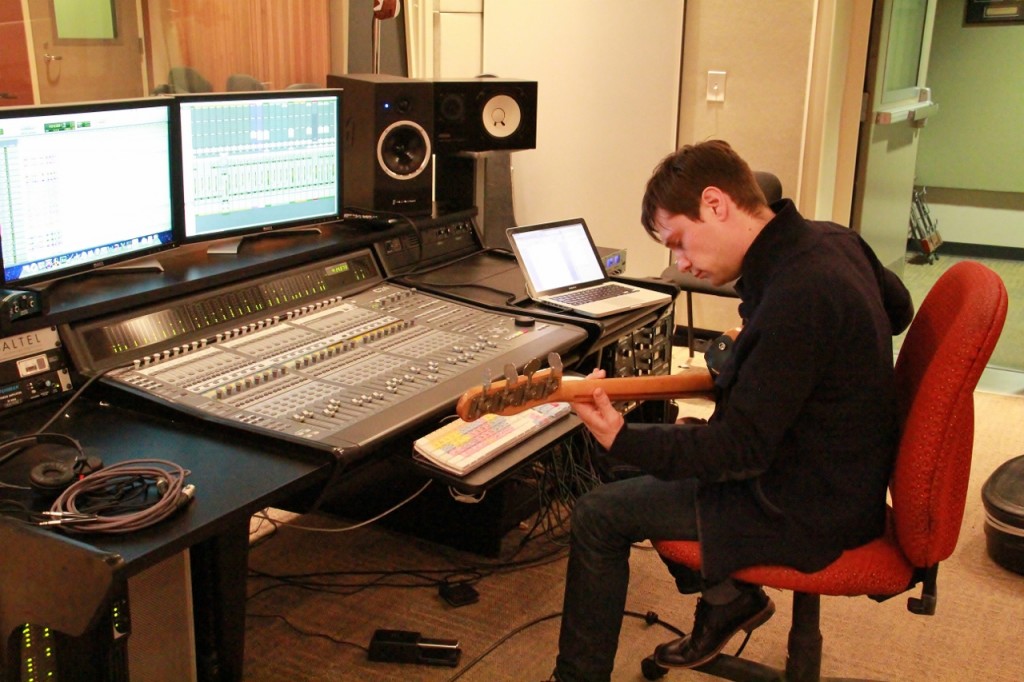 Coda: Professor Sean McClowry contributes the electric bass during one of six studio sessions that transformed a student song into a professionally produced recording. (Photo by Benjamin Marvin)

← Junior Year – A Year in Review
A Semester Reflection →