Success hinged on speed, accuracy and knowing what not to worry about 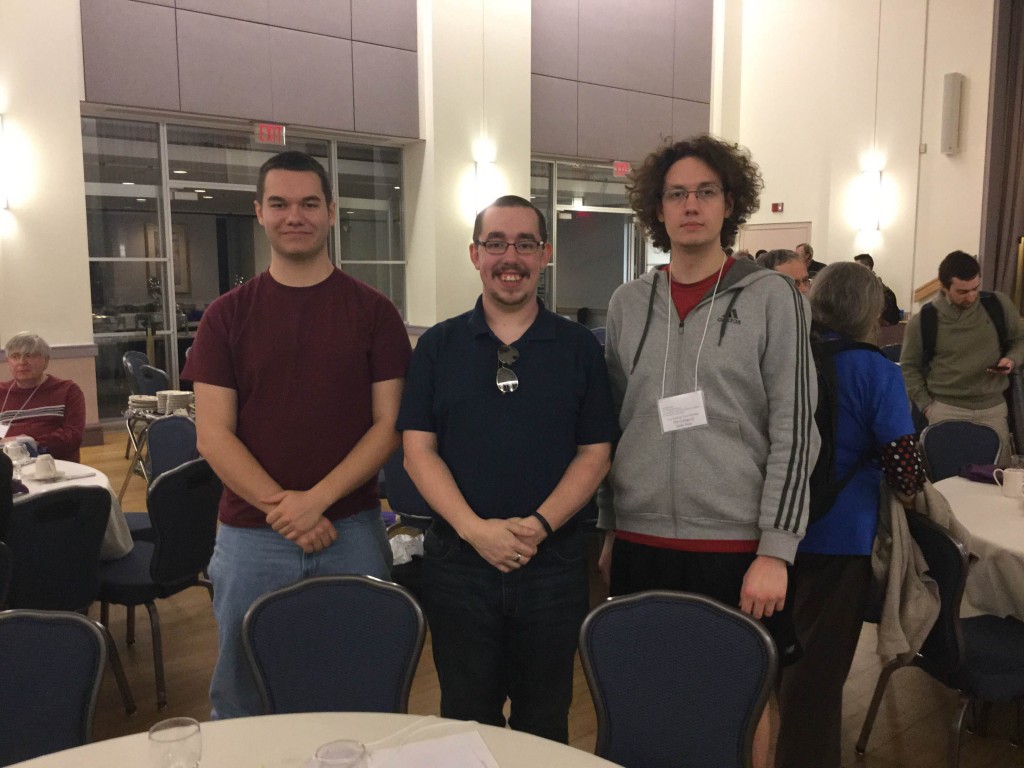 No sweat: The Saint Rose computing team – Whitney, Lovell and Jordan – figured out what not to worry about, along with correctly and quickly solving the tough problems to net a second place finish in the 2015 CCSCNE contest

At the annual Consortium for Computing Sciences in Colleges northeast regional competition, 30 teams were given three hours to solve six problems.

The first, titled the Sands of Time, asked for a program to determine how long it would take grains of sand to drop from the top beaker to the bottom beaker of an hourglass, using a measurement of grains to rate. Some teams lost an hour or so trying to pin down a solution.

“Our team figured it out in zero minutes,” explained James Teresco, associate professor of computer science at Saint Rose. “Part of the competition was ‘could they figure out that it’s only a three-line program, or will they make a big deal of it?”’

Based on their accuracy, speed and the ability to determine what was not worth spending time on, Saint Rose tied for second place in the recent regional competition held at College of Holy Cross in Worcester, Mass. The team, made up of juniors Scott Whitney and Rains Jordan, and senior Chris Lovell, netted a personal best for the College in the CCSCNE competition and also beat out many powerhouse teams that are accustomed to claiming the top spots.

“It’s not an easy thing,” said Teresco, who noted that no team mastered the final, most difficult, question. “You could have almost perfect solutions but be off. This shows that Saint Rose is right up there with the top schools.”

The impressive outcome not only reflects the strength of the College’s growing computer science program, but also the benefits of a new class in competitive programming.

In contrast to more traditional programming, competitive programming arms computer science students with tools to handle a flurry of problems quickly, as they would do on the job at a bank, or hospital or government agency.

“We treat the class as a game and it’s fun,” noted Teresco, who teaches the course, along with Assistant Professor Mark Gilder. “But it is designed to test skills that are important to use in the real world.

← Education for the Children
Good to know: school psychologists: educators who wear many hats →