Good to know: The unusual journey of a unique student 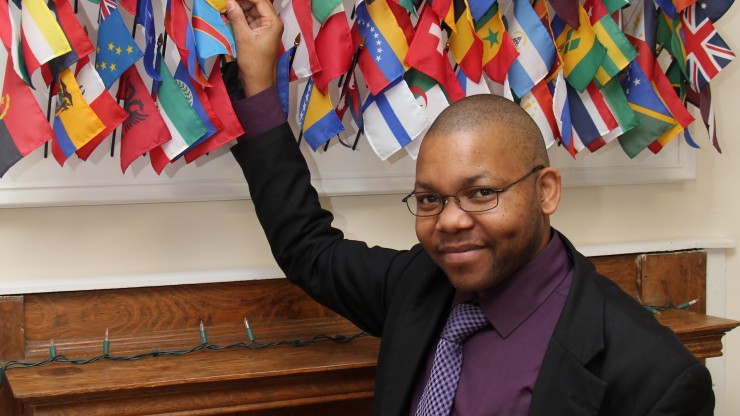 “I believe I am the first deaf student from Mozambique to go to South Africa and earn an undergraduate degree, come to the United States and come home with a graduate degree,” says Inocencio Zandamela, Fulbright scholar, teacher, advocate, father of four and recipient of a master’s in educational psychology from Saint Rose.

A high-profile student, Zandamela volunteered with the Help Yourself Academy after-school program and led sign language chats on campus, bridging the hearing and non-hearing worlds in ways that were not possible back home in Mozambique. Growing up there deaf, he stood little chance of gaining a decent education, let alone a meaningful career. So he left, to study at the University of Witwatersrand in Johannesburg, South Africa.

Zandamela’s goal, then as now: transform deaf education at home. It’s a drive that brought him to Saint Rose on a Fulbright Scholarship to earn his master’s in December. The Fulbright program is sponsored by the U.S. Department of State’s Bureau of Educational and Cultural Affairs and is designed to “increase mutual understanding between the people of the United States and the people of other countries.”

Before returning to Mozambique with his wife, Suzette, and daughter, Hillary, Zandamela talked, through interpreters, about his Saint Rose education, the need to shake things up and how he keeps smiling.

On being deaf… I’m a proud culturally deaf person, but as a kid that wasn’t the case. I was isolated. There were no deaf role models. They aren’t seen.

Almost all children born deaf, their parents are not deaf. Learning sign language is not even a consideration. The parents believe they are being punished if their children are deaf. Schools are not challenging; services are sparse. Deaf people graduate illiterate or don’t graduate. Many are not able to find work because many jobs require high school proficiency certificates. 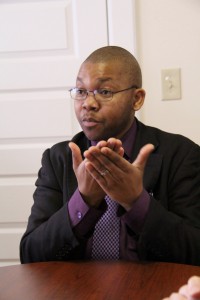 On succeeding anyway … I was nine years old when I became deaf as the result of a terrible illness some years earlier. My deafness did not jeopardize my education early on, but later it had a great impact as I became profoundly deaf.

I had already acquired language and didn’t have the struggles of people who don’t have the language to build from. My family helped me cope and avoid depression as I felt isolated from the hearing world.

This made my background different from other deaf students in my country. I just haven’t felt worthless or depressed. It’s just who I am. I feel that I can contribute. We’re all just people.

On leaving your country for college… I wanted a proper education and there wasn’t an opportunity in Mozambique. I went to South Africa to continue my studies. I had interpreters there. I was the lone deaf person. I had no opportunity to learn with deaf peers.

On the prerequisites … I had to learn English. It was offered in Mozambique, but because of my deafness I didn’t get to study it too much.

And … I also had to learn ASL (American Sign Language) in South Africa. I used social media to learn it.

On feeling that something was wrong… Once I finished in South Africa I went back to Mozambique and worked in a school for the deaf. I was the only deaf teacher! I realized we needed to make changes. I applied to Fulbright.

On what he learned here … I learned educational theories, such as Piaget’s stages of cognitive development and learning theories. I learned about children’s ability to take in education at different stages; how children learn in a collective environment.

These theories I can take home with me to apply to the education of a deaf child. I can identify the pieces that are age appropriate. Also, this has given me a better idea of how to work through systems and fight for human rights. I can’t say enough how grateful I am to Saint Rose. The students are wonderful. The Writing Center is a terrific resource. The faculty and staff maintained an open-door policy. The Center for International Programs was very, very kind and engaging. I felt completely embraced by the community. 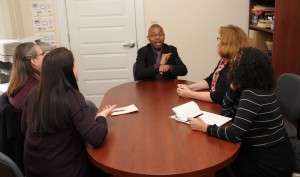 And this didn’t hurt … The president of Mozambique was visiting New York. They invited me and other Mozambicans for a dinner. I told him my story and he said I had his support. He suggested speaking with the minister of education. I have his contact information and will work with him to improve of education of the deaf in my country.

He suggested his wife put on some extra layers … I really liked the snow. I liked traveling. I went to surrounding cities and to California. I tried skiing, went for a drive in the mountains.

On what’s next … I will work at the same school for the deaf as before. But if I just teach in the classroom I won’t reach many people. I want to work with teachers of the deaf; they are poor signers. I want there to be certification for signers.

I hope to work advising programs. I want to see what’s going on throughout the country at an administrative level. 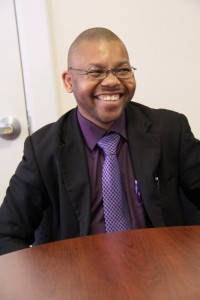 On his constant smile … I use my personality to benefit others. I have seen so many terrible things that happen to deaf folks and I want to be an example to them. I also think that being a diplomatic person is helping me get what I need.

You just have to keep trying. I had the opportunity to go study. Other people don’t. Not that I haven’t been oppressed. I’ve experienced the same discrimination as others. But I just have tenacity. I just keep trying.

← Wait…We Have to Go Home? – Making the Most of College Spring Break
The Kingdom of Brubacher Hall… →