Good to know: When the word “volunteer” just isn’t enough 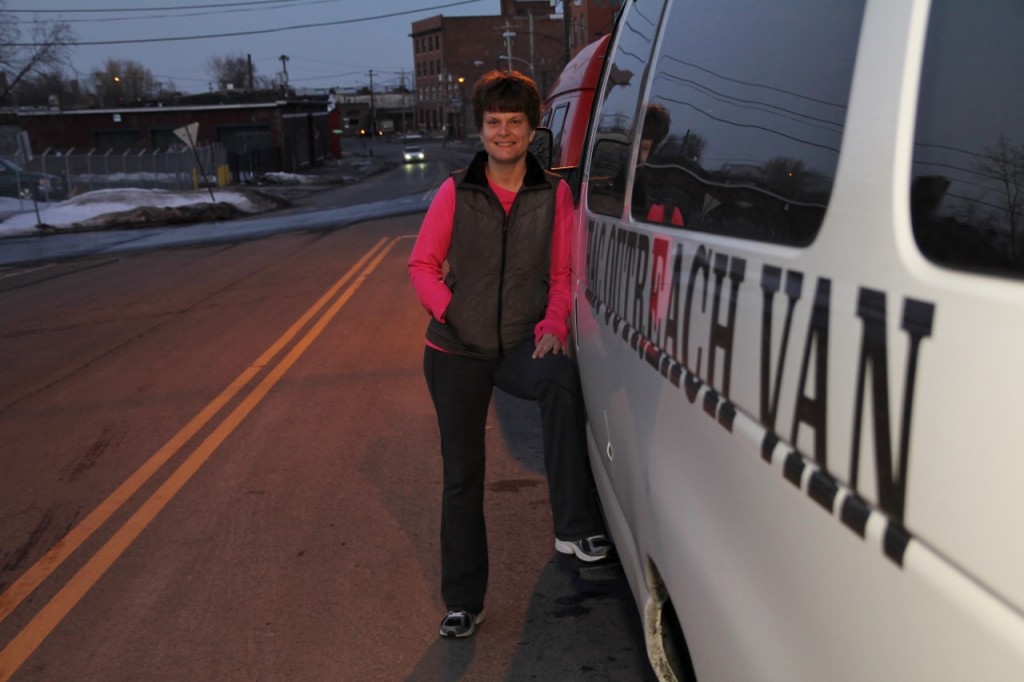 Wednesdays at 7 p.m: Not showing up is not an option for Sharon Denman ’15 and other Saint Rose students who play a crucial role when they volunteer at local organizations such as the Homeless Action Committee.

Sharon Denman no longer thinks about the CVS and the fitness club when she passes Westgate Plaza shopping center.

“Now I think, ‘that’s where John lives or Sue is living, in woods behind the stores. I have to check on them,”’ said Denman, a Saint Rose social work student who graduates next month. “I wonder who might need a ride or a sandwich. I had no idea there were that many people in Albany who are homeless.”

At 7 p.m. every Wednesday she gets an idea, when she heads to North Pearl Street to meet the Homeless Action Committee’s white van. For three hours, she and the driver troll the neighborhoods and the places between — the woods behind stores, the park benches along the Hudson River, the warm-air blowers at the Empire State Plaza — to find the people who might benefit from a ride, a blanket, a sandwich or something warm to wear.

Sometimes, these individuals accept a ride to a shelter. More often, they decline. And only rarely is a homeless person ornery or angry, she says.

“They are just like anybody else, they appreciate the connection and you make them feel better,” explained Denman, who is careful to emphasize that her role is a small one. “When I am on the van, I think ‘at least maybe I get to help someone tonight.’”

Not showing up is not an option. Without the volunteer Wednesday night, like the four other week nights, the van cannot stop to provide food, rides or respite from the cold. And the recent stretch of frigid weather was hardly justification to stay home – given that the idea was to assist people who have no home. Those nights, when temperature, wind chill and snowfall made conditions particularly hazardous, Denman’s shifts stretched until midnight. It wasn’t always fun to leave her home in Clifton Park and drive the half hour to get started.

“Sometimes I think ‘What am I doing here? I could be home staring at the TV,’” she said. “But then, what good would that do?”

It was the same awareness of the world beyond campus that led a Saint Rose alumna, Donna DeMaria ’83 to start the Homeless Action Committee in 1989. Like Denman, she says that as a student she came to see the impact of a single individual.

“I took political science and sociology classes that really got me excited about organizing,” said DeMaria, who majored in education and social sciences. “I became politically active within the Albany community. Saint Rose brought the whole progressive viewpoint into my life.”

In the years between DeMaria’s tenure at Saint Rose and Denman’s, the emphasis on service has become more pronounced. The annual service day, Reach Out Saint Rose, draws more than 700 students. A strong contingent annually devotes winter and spring break to working with the homeless in Washington and to rebuilding homes in New Orleans. And scores of students every day volunteer in and around Albany, as the College moves to infuse experience into the curriculum.

But there is also another segment – those who put in sustained time with an organization simply because they want to. Often, the role is more like staff member minus the paycheck.

“There is a reasonably good percentage of students in all programs who are involved in all kinds of things just because they want to be,” said Richard Pulice, a professor of social work who himself has devoted years to riding the Homeless Action Committee van and collecting food and clothing. “I have not required students to volunteer. I don’t believe in requiring people to participate. We are always proud, but not surprised, by how many do.”

The word “volunteer” doesn’t quite describe the role Denman plays at the Homeless Action Committee. Not only is attendance a necessity, but she has also stepped in to help keep the organization afloat.

In October, the organization’s decrepit van broke down for good. The only mobile support for homeless individuals in the Capital Region was out of service. Denman, who handled a full courseload, joined the ultimately successful fundraising appeal to purchase a new van.

“I helped film a video that went online at my house. The staff came over,” she said.

A Fulton County native, she once pictured working on a cruise ship. It was a goal she scrapped as she grew aware of the vast number of people who struggle to meet their basic needs. In the early 1990s, she began staffing, and later managing, group homes for individuals with developmental disabilities. She wished to broaden her scope still further.

After graduating from Herkimer Community College with her degree in human services, Denman transferred to Saint Rose in 2013 to study social work. In an introductory class with Assistant Professor Janet Acker, an individual from the homeless organization did a presentation and Denman was intrigued.

As she rides around in the van, she grows more mystified at the many, many people who live so close – but out of sight – of society. Denman said that giving out sandwiches doesn’t address the larger issue: the lack of affordable housing.

Then again, seeing a social crisis one person at a time is the point.

“It’s true. I see the issue less about the concept of homelessness that you read about,” she explained. “It’s more about meeting people where they are at and that’s the basis of social work.”