by Kayla Germain on July 18, 2013 in All About Saint Rose, The College of Saint Rose · 0 Comments

Meet Brittany Duquette, a current student at Saint Rose who will graduate in 2014. 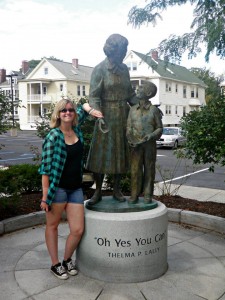 Brittany with the Thelma P. Lally statue on The College of Saint Rose campus. (photo provided by Brittany Duquette)

Brittany is from Melrose, NY and graduated from Hoosic Valley High School. We asked Brittany to share her transfer journey to Saint Rose and here she is, in her own words:

My name is Brittany; I transferred to The College of Saint Rose in the fall of 2012 and will be graduating in December 2014. I am an Early Childhood/Special Education major and would one day like to be a kindergarten teacher. Unlike the majority of the student population, my college journey did not begin at Saint Rose.

While most people in my high school graduating class were trying to decide which college they wanted to attend in the future, my choice was made for me. My parents wanted me to attend Hudson Valley Community College my first two years and then transfer to a four year school. Despite already knowing what college I was attending for the first two years, I would attend college fairs with my school in an attempt to figure out where to attend after HVCC. I decided on SUNY Plattsburgh because I wanted to go to college up north. That idea was soon crushed when I found out that they did not have my major there. I decided that I would transfer to SUNY Potsdam after HVCC since it was both up north and had my major of choice. My dream school quickly changed within my first year at Hudson Valley.

My first year at HVCC, Dan Capogna came in to discuss transferring to Saint Rose. During his presentation I had gained interest in the college, but I was not fully sold. I had never wanted to check out Saint Rose because I heard that it was a very religious college. As soon as Dan revealed that the college does not revolve around religion, I had a new dream school. When I attended an open house at Saint Rose, I immediately fell in love with the campus and knew that it was where I wanted to spend the next two years.

When I arrived at Saint Rose in the fall of 2012 I had no idea what to expect. I was living in a single room in a dorm full of complete strangers. I lived in the transfer dorm building that is actually three buildings that connect together, which is referred to as RCC (Riley, Carondelet, and Cavanaugh). The first night was very strange and everything took time to get used to. Our resident assistants made a Facebook group for RCC that most of us are still a member of even though we no longer live in that building. We slowly got to know each other, but it was not until Reach Out Saint Rose that we really began talking to each other. Reach Out Saint Rose is a campus wide community service event held each year. 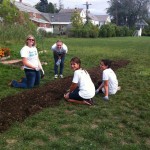 Brittany working in a garden for Reach Out Saint Rose. 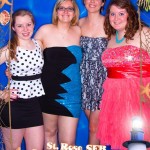 Brittany and friends at the 2013 spring semi-formal. 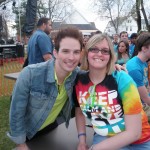 My advice for anyone thinking about attending Saint Rose is to go and take a tour of the campus. Once you walk the pathways we walk each day you will know for sure if you want to be a Golden Knight. My advice for new transfer students is to attend every event possible, especially floor events put on by your Resident Assistants if you choose to live on campus. Events are one of the best ways to meet new people. My other suggestion would be to join one of the many clubs on campus. I joined the CDAEYC (Capital District Association for the Education of Young Children) and am the president for the 2013-2014 academic year. I may not have gone down the original path I had in mind for furthering my education after HVCC, but I have had so many opportunities at Saint Rose that I would not have had at any other college.

Ready to learn more about transferring to Saint Rose? Visit our transfer page for more information or call 518-454-5150.

← We’re Outnumbered!
Look at all those… Heads and Tails! →