Aldrine Domalanta, ’16, was kind enough to share a guest post about his experiences while studying abroad in Buenos Aires this semester. Aldrine is a Spanish major with a minor in Psychology and previously studied abroad for a semester in Sevilla, Spain. In his own words:

Two cars driving in a single lane. The middle of an intersection acts as a stop sign. The frequent talks about coffee and upcoming elections. The beautiful Italian intonation of the Porteños. Welcome to Argentina.

The first day and a half have been peaceful, as the majority of the “Bonaerenses” are currently at a gathering for the convention of Cristina Fernández, Argentina´s president. The convention held today will greatly influence the 2015 election–Cristina was barred from it–however, many citizens have become unsettled because of a recent fiasco involving a government official´s assassination. The convention is currently located near Plazo de Mayo, the heart of the capital of Buenos Aires. 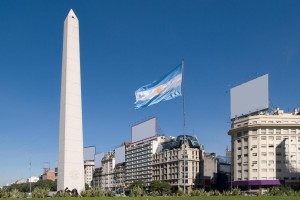 This morning was ISA´s scheduled city-tour for international students; however, the rainfall prevented us from venturing out as the wanderlust students that we are. Instead, a general meeting was held, with some lunch provided afterwards (we were given a variety of empanadas, including salad). Guillermo, ISA´s resident director of Buenos Aires, hosted a meeting in which his humor had us all bursting out in laughter. I was relieved when he mentioned being a talker. I, too, am unfortunately a talker.

I will be living in the neighborhood of Belgrano for the next five or six months. I couldn´t explore much because most stores are closed on Sundays. Although there are great dangers in Argentina, there will also be great moments, ones that will be worth telling the world. I have already been recognized as ¨Manny Pacquiao¨–a professional boxer–to some locals. The next several months will be unforgettable.

The Sangiorgis, the grandiose family name of my host-parents, are retired workers who ensure that every international student has a positive experience. They are passionate fans of fútbol–FCBarcelona and River are their favorite teams. What surprised me most was their physical shape, given that they´re both nearing their nineties. I hope to develop a great relationship with them.

This weekend will be an excursion to a city south of Buenos Aires.  I hope you all enjoy the rest of your semester! Un besazo!

← Be The Best Version of You
Good to know: When the word “volunteer” just isn’t enough →