How the Business, and Fun, of Being a Student Continues 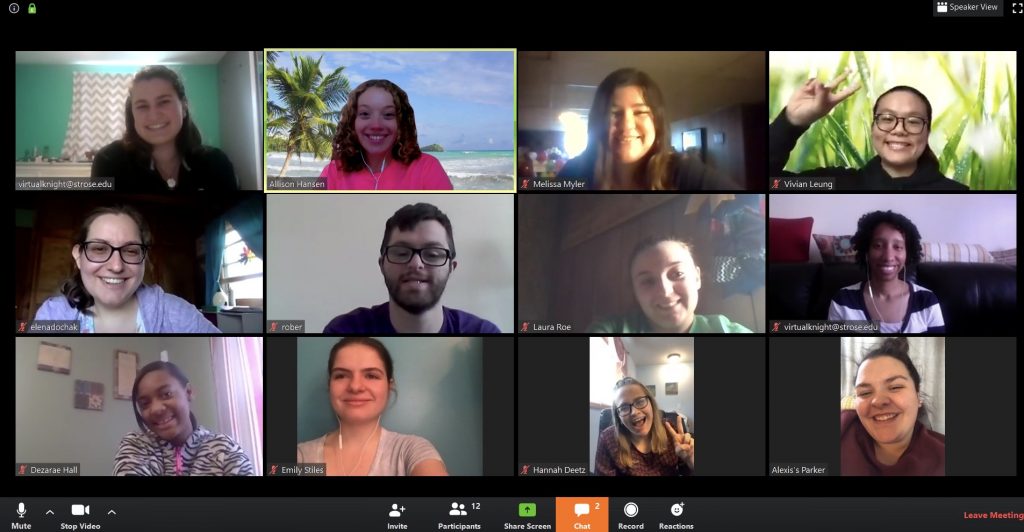 This is what happens every Tuesday at 3 p.m.: The Student Association meets, and sometimes closes with a joke and parting “Peace” symbol.

Even though she’s home, Student Association President Allison Hansen attends 10 or so meetings a week with fellow students, as campus clubs plan and host events and gear up for next semester. In spite of being uprooted, Saint Rose students, thanks to new technology, hold a lot club meetings, magic nights and trivia nights, and weekly jam sessions. They’ve even pulled off two community-wide forums.

Hansen, who lives in Rockland County, finds comfort and company in these collaborations as she continues classes toward a dual undergraduate and graduate degree in communication sciences and disorders. Here, she discusses how events are planned and executed under these most unusual circumstances:

How did the Student Association respond when the College announced that classes were going to go online for the rest of the semester?
Everyone was shocked. We had a meeting with Dr. Shai (Butler, vice president for student development and chief diversity officer) in the Standish conference rooms. A ton of people came. We were flooded with emotions. We always have a few people stick around. This time, the biggest thing we heard was from people who needed support. They said ‘I can’t go home. I have a difficult home life. We walk on eggshells.’ They needed to stay. We referred them to people who could help. You never know what’s going on with people, and the fact that College could offer a place to stay was a good move.

What SA projects were in the works?
A ton of stuff was going on. We were working on nominations for the Service and Appreciation awards in May. Students decide who our awards go to. (That’s starting to feel like a long time ago!) The biggest thing was Rose Rock. We were in the process of booking a headliner, then we said ‘That’s not going to happen,’ so we didn’t get stuck paying someone.

How did you reconfigure online?
The first move was to find a time to get together. We kept the same day, Wednesday, but moved it from 6:30 p.m. to 3 in the afternoon. Our comptroller, Nick Koenig, is from Germany. (He’s a first-year student, on the soccer team, and only had the job for a month.) If we’d stayed with 6:30, it would have been 12:30 a.m. the next day for him.

When we started meeting, we got a decent amount of people, maybe 40. Usually, we get from 40 to 50, so we thought this was pretty good. 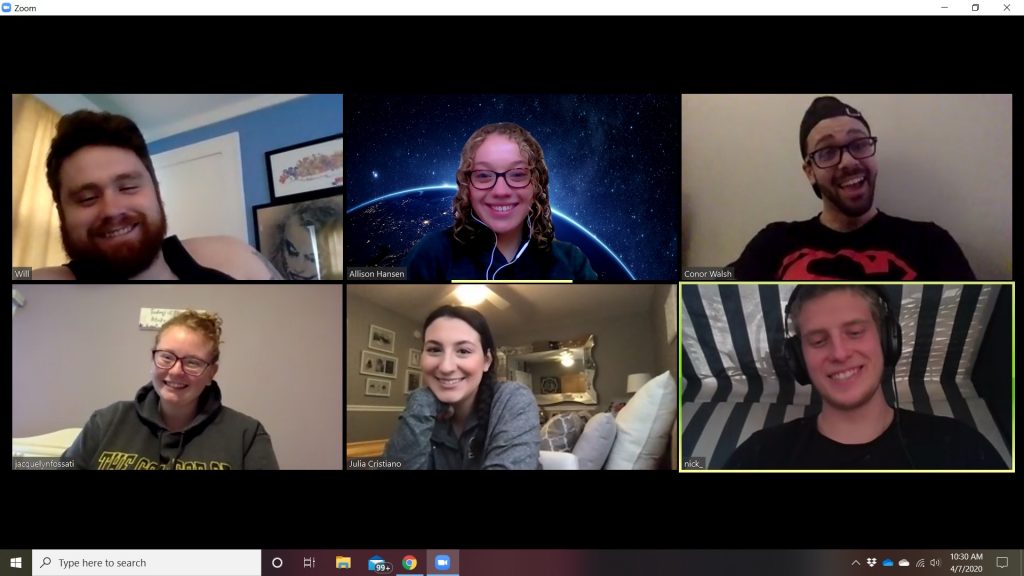 Meet the Student Events Board.

That’s an achievement. What else have you done?
We had the idea for town hall meetings to discuss concerns on campus, then we decided to do it online. We had it twice last Thursday, via Zoom. With (head of student life) Cherèva McClellan. We got a lot of people to talk about what they’ve been going through and how we’ve been adjusting. I think students did need that.

What about routine SA business?
To be SA-recognized, every club has to host two fundraisers a year. For a lot of clubs, it’s not hard at all, they are so active. But we’ve been training incoming clubs on how to fundraise and stay active. It’s budgeting season. We have a huge hearing next week to decide budgets. Clubs submit a fiscal performance review that highlights everything they’ve done this year.

What about fun?
In a matter of days, Conor Walsh, the director of social activities, planned and executed a twist on Rose Rock, called Saint Rose Rocks. An episode is released every Friday at 7 p.m. through Instagram, Facebook, and YouTube (“St. Rose Rocks.”). This is a web series that highlights Saint Rose artists, whether current or alumni. The first episode was Isaiah Jet Valejos, a songwriter, rapper, and producer. Our second episode was a musical duo, Julianna Sweeney and Tyler Schmidt. The third featured music industry guitar major, Drew Pelrine and his band from back home, Acheron!

It’s amazing to see friendly faces from campus coming together during this tough time. I cannot thank Conor Walsh enough for being at the forefront, and Cherèva McClellan for working behind the scenes.

When you’re not discussing official business what are you hearing?
The biggest things are the seniors. It’s not anybody’s fault, but a lot of them are sad this has happened. The overall tone is nostalgia. They didn’t know they were having their last day on campus, but they are really encouraged that there will be a graduation later on.

I think we’re doing the best we can with what we’ve got. It’s not ideal, but students are looking at the ways they typically do things and finding the creatives sides of themselves. We hope in the fall we’ll be really happy we stayed active and kept things going.

A snapshot of student activities  Check here to keep up: