Yes, you read that right. Jewel Stealing Space Cats, you know cats in space stealing jewels. Here, have a visual. 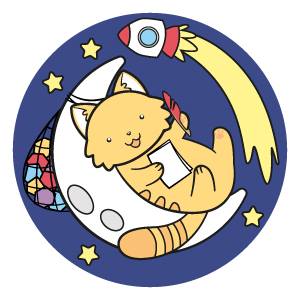 Okay, so this probably and most definitely needs some explanation. That’s why I’m here. The Jewel Stealing Space Cat is the official logo for the Albany region NaNoWriMo 2014.  That probably also needs some explanation. For those of you who don’t know, November is National Novel Writing Month, and NaNoWriMo is the month long event, goal, or whatever else you want to call it to write one novel (50,000 words) before November ends.  According to their website, NaNo is “valuing enthusiasm, determination, and a deadline, NaNoWriMo is for anyone who has ever thought fleetingly about writing a novel.” The organization is actually a nonprofit, aiming to “empower and encourage writing and vibrant creativity around the world.”

Although I have known of NaNoWriMo for quite a while, this is my first year actually doing it, and I will tell you it’s been tough. That also may be due to the fact that I had two ten page papers to work on during week one, therefore NaNo took a seat on the backburner. October was spent planning and plotting, or attempting to plan and plot. On Halloween, a friend and I headed to the kick off party, where we scrambled to finish outlines and character biographies. At the stroke of midnight we wrote.  By the end of November 1st, I had written over 4,500 words.

When it all boils down to it, there are two major steps to follow during NaNo:

There is of course, also a list of the necessary tools:

The other day, I was up until 3:30 a.m. (when I had a 9 a.m. class), part of that was probably because for some unknown reason, I had Here Comes Santa Claus stuck in my head, and because I was laying in bed, on my phone, writing, and I still made it to my 9 a.m. on time.

One thing I have thoroughly enjoyed this month, is meeting other people who share this crazy goal. Some of these people are published authors, some are in high school, and some are retired. Some of us are writing science fiction time travel adventure stories, and others are writing about World War Three.  Yet we’ll meet up at Starbucks or Bruegger’s Bagels, and we’ll sit there and write in sprints, and we’ll spew quotes out to each other, and then we’ll get distracted and tweet about how we’re #stillnotwriting.

“Anne, quit procrastinating and write” – My conscience
Back to NaNo,
Anne Marie

← Networking: Why Is It So Important?
#stroseNPD (…we’ll explain) →