Hi Everyone!  Hope you all had a wonderful 4th of July!  I’ve got to say, this was the day I was looking forward to the most when I found out I was going to be in DC for the summer and it exceeded my expectations!

If you remember from my last post, I mentioned that we had a half day of work on Tuesday to start the holiday.  Flor, Sheila and I went out to lunch and then walked to the Museum of American History.  It was nice not being on a time schedule; we could do everything at our own pace.  At one point in the afternoon, we noticed a large group of people gathering in the hallway.  We stuck around to see what was going on and found ourselves at a demonstration of the student sit-in at the Greensboro lunch counter which was interesting.  Overall, the museum was a lot of fun and I really enjoyed their company. 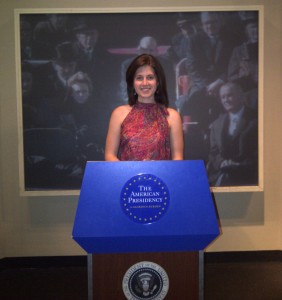 Exhibit at the Museum of American History

Yesterday, we celebrated two occasions: July 4th and my friend Alyssa’s 21st birthday!  Alyssa wanted to go to Founding Farmer’s for her birthday brunch.  Thankfully we had reservations because it’s a popular restaurant and we ended up having a group of 11.  Everyone was dressed in red, white and blue; it was really fun!  After brunch, we walked up to Adams Morgan and enjoyed the afternoon in a new part of the city. 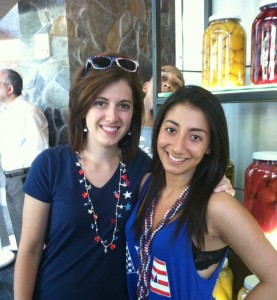 Last night was the best though.  Alyssa, Alex and I decided to watch the fireworks from the Lincoln Memorial. I don’t know that I have ever seen as many people in one place as I did last night at the fireworks.  Between the crowds of people and the heat of the day, I was impressed that people were so friendly.  I never once heard people arguing or getting mad at others for getting in their way.  I think that says a lot about how people respect the holiday.  Everyone was cheering and clapping during the fireworks; it was awesome!  This is one 4th of July that I will always remember. 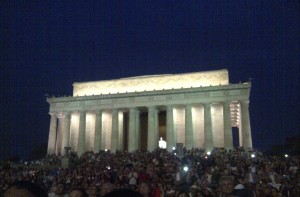 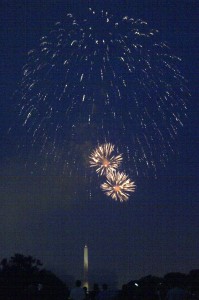 Fireworks over the Washington Monument

Have a great weekend everyone!  Check back on Monday to read about my first Nationals game!