You may have noticed your resident British blogger hasn’t posted for a while. This has been mainly because I have been so busy getting settled into class, playing with the Men’s Soccer team and generally getting set up for life in the US. My aim in this post is to summarize my experience so far. 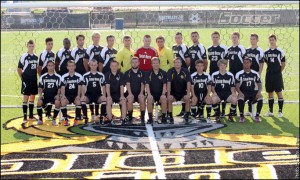 In terms of the Soccer season so far, I think the experience in the team has generally been positive. Preseason ran smoothly, with the team feeling fit and ready. We are currently 0-4 (0-2 in the NE-10) but the team has been working hard in training to create a winning attitude. It’s probably fair to say that three out of the four games we have played this season, we’ve totally dominated possession and territory during lengthy periods, which has led to frustration that we’ve been unable to score. But there is definitely a win coming, so make sure to come and support your Golden Knights! Our next home game is Wednesday 19th September at 7PM and we will be taking on the Bears from NYIT.

Class is fun at the moment. Of course, there is the usual annoyances of homework, reading and quizzes but that is just part of learning. I’m having particular fun (and I never thought I’d say this) in my English class, where we’ve been having great fun discussing our writing pieces. All of my classes have been good fun, informative and useful so far though so no complaints there!

Living in Brubacher Hall has been amazing so far. There are always people to meet or games to be played. It was my birthday last Sunday and my roommate’s Mom was kind enough to bake me a birthday cake (thanks again!). We decided to share it with the residents of ‘Bru’ and had a little birthday party in one of the lounges. Living in the US has been even more different than I expected it to be so far, but it’s certainly a lot of fun!