My First Year Experience at Saint Rose in a Nutshell

by Alexander Lawrence on May 5, 2015 in All About Saint Rose, Golden Knight Spotlight · 0 Comments

As my first year of college comes to a close I wanted to take the time to talk about some of my experiences. I would also like to give a shout out to two people who have made a huge impact on my life.

During my first year here at Saint Rose I can honestly say I’ve had a lot of fun. I’ve meet some fantastic people through my online blog series “Golden Knight Spotlight” that I probably would have never met or spoken to. A special shout out to everyone who participated in my first semester with the blog series. You guys are all amazing.

It’s definitely exciting to be a part of this sport. We’ve had fun traveling and getting to know each other. We’re a small team, and not a lot of people see us as a serious competitive club team. I can say this much: this club team works hard to improve and get better. We treat it as seriously as possible. It’s honestly one of the decisions I’ve ever made.

As a criminal justice major I’ve taken up the role of President of the Criminal Justice Association to help lead this program. I’ve had fun with the role and have big things in store going forward.

I’ve also been involved with singing on-campus quite often for those of you who don’t know. I performed at numerous open mic nights, StRose Idol, and am a proud member of the Golden Notes (On-Campus A-Capella group). It’s a group that is near and dear to my heart after just one semester with them. They’ve welcomed me with open arms pretty easily considering I didn’t know most of them. They are all truly unique individuals in their own ways.

Being involved with all these activities has made my first year absolutely wonderful and I wouldn’t have wanted it any other way. 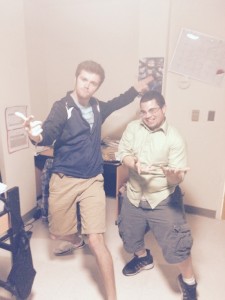 Now let me transition a little a bit and talk about two people I met here who have been role models for me. When you meet new people, you never really think much of it at first. It just goes to show that you never know how much of an influence a person can have on your life.

To the right is my RA Eric Treacy. I got lucky enough to be placed on Lima 1 my first year here and, ladies and gentlemen, Eric is the greatest dancer here at Saint Rose. I can remember Eric dancing to the song “Chandelier” by Sia. Not only did he dance to it, but he sang it too. It basically became our floor anthem. All I’m saying is whenever you hear or see Eric singing or dancing you are in for a great show guaranteed.

The transition from high school to college is always a tough one. I was nervous and I didn’t want to start fresh and I knew I had to.

He was my first true friend here at Saint Rose. He made that transition seem so easy for me. He got to know me. He’s just an outgoing guy and I’d say he definitely pushed me out of my comfort zone. Seeing Eric be a leader to everyone on our floor made me want to pursue being a leader on-campus as well. He’s honestly the reason I’m so involved.

He’s a very genuine guy and I know when I need to talk to someone about an issue I’m having I can always go to him for anything. I know his door is always open and I couldn’t have asked for a better first year RA. I’m happy to call Eric my friend. 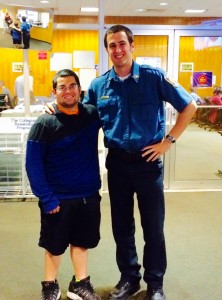 Nathaniel (right) and I

Out of all the friendships I’ve made my first year here, this is one of the most influential I’ve made in my life. You guys may notice right away who this man is. He graduated Saint Rose in 2014 and works here as a security guard. His name is Nathaniel Meyers (right).

I remember I always saw him at the security desk or ran into him on-campus. I would always see him so I thought “hey just make small talk.” It became more than small talk. We got to know one another fairly well and saw we had mutual interests. We both had interests in music and were sports fans. He was also a criminal justice major as I currently am.

Throughout the year Nathaniel has showed me the drive he had when he was in pursuit of his degree. It honestly sparked me to get more involved in my education and more in my program. I saw right away from his direct and honest approach to things that he had a passion in everything he did. If I ever needed help with anything he’d go out of his way to do it if he could. I’m at a loss for words for everything he’s done for me and directing me in the right path while I also am in pursuit of my degree.

Every conversation I’ve had with Nathaniel has better prepared me for college and anything else the world has to throw at me. It’s thanks to Nathaniel that I’m certain that criminal justice is what I want. I wish him nothing but the best going forward, I’m glad to have met such a great individual who has helped me get through my first year here by being a role model for me.