My Look Into Poverty

You might have heard some buzz around campus this past week in regards to a couple events to raise awareness about poverty and homelessness in the Albany area and across our country. The Office of Spiritual Life is very familiar for Social Justice Month, but these events were a way to further promote awareness and educate the Saint Rose community through another outlet, and especially during Homlessness Awareness Month.

On Advisement Day, students were invited to participate in a Poverty Simulation. When participants arrived, they were given an identity and put into a “family” that would face multiple hardships living as citizens at or below the poverty line. Volunteers (myself included) were placed around the perimeter of the room, and acted in roles such as a Social Services Caseworker, Bank Owner, and Supervisor of a drop-in Shelter. I was acting as the clerk of the only grocery store in the “town”, and I was only able to speak in Spanish when interacting with the family members, which made many participants very frustrated.

When the simulation was over, all 60 participants were able to come together for a discussion about what participating was like for them. I was amazed at how many of our students were impacted by the simulation, and what they were able to take away from it. I left the room feeling like each and every student that participated learned something that would change how they see poverty and the people that experience it.

Friday night in the Sanctuary was a whole different experience. You might look out on the Campus Green and see some now very weathered cardboard structures. These cardboard structures were made during our “Not Your Usual Sleepout for the Homeless”. No, we did not spend a night sleeping in cardboard boxes, pretending to be homeless. 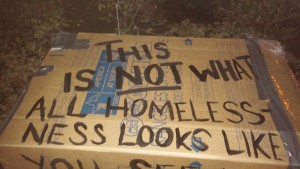 Part of the building of our cardboard structures was including some messages about homelessness to get passers-by thinking and talking.

Instead, this was a night of education and empowerment. Entry was a monetary or canned good donation for the Interfaith Partnership for The Homeless. Spending some time outside was relieved by coming into the Sanctuary and using only the bag of pennies you were given at the beginning of the night to “buy” a sandwich or hot cocoa, in order to feel what it’s like to be on a donation-by-donation budget. We heard from guest speakers, watched a very moving TED Talk, and spent time discussing and reflecting on what we as Saint Rose students can do to help those who are facing homelessness.

Both of these events were an opportunity for our students to take a step back and learn something about what they can do to change the world we live in. We learned that doing something to help someone does not have to be this huge Mother Theresa-esque project, but can simply be to treat everyone with the kindness that we as human beings deserve. So now, myself and my fellow participants, be ready to branch out, and impact not only the Saint Rose community, but our community everywhere we may go.

← Good to know: PB&Jams: sticky fingers, sweet rewards
Good to know: extending the definition of “home” to a community in need →