Not one single siesta (yet), and a lesson in cultural difference

Nine daring souls have ventured out on pilgrimage, the ancient pilgrimage route known as The Way of Saint James, or the Camino de Santiago. They are: Lindsey Cagle, Liliana Coraizaca, Brianna Gualtieri, Heidi Proper, Álvaro Sosa Suárez, Leejun Taylor, Tess Thapalia, Amanda Varno and Lindsey Wiehl. These students are completing classwork for Spanish 370 Experiential Spanish, a course that includes an immersion experience focusing both on language and culture. The students will walk an average of 25 km per day until they arrive in Santiago de Compostela. Along the way, they will engage in directed conversations and reflections, developing enhanced skills in conversational Spanish, while meeting pilgrims from around the world. 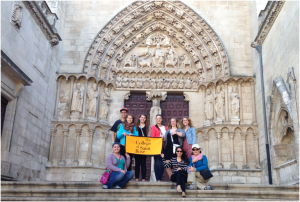 After 21 hours in transit, the SPA 370 class landed in Burgos, Spain! This was a metaphorical landing: our journey began in the Albany airport, through Newark to Madrid, then via bus to Burgos. Happily, the students were blissfully unaware of a booking error with our bus. The bus driver, in contrast, was painfully aware of the error, and this, compounded by the fact that I refused to put my walking poles or book bag underneath in the luggage compartment led him to give me a full dressing down in front of the students.  “This is a MODERN bus, not some old TRUCK! Now all of you go to the back of the bus!”

We are trying to focus on cultural difference as well as language learning in this class, and the driver’s tongue-lashing allowed me to reflect on a characteristic of the Spanish culture. When faced with a minor problem, it is entirely appropriate to complain loudly and declare that there is no possible solution to a problem. In past visits to Spain, I have protested back, or taken the castigation very personal, when in fact all I needed to do was sit back and let the complaints happen. In the end, things do get resolved, and it is nothing personal. It is simply how Spaniards respond to a problem, before resolving it.

Case in point:  the woman at the bus ticket counter, prior to boarding the bus. Our flight into Madrid arrived almost an hour early, and we passed through passport control and customs quickly. I approached the ticket counter to see if we could get on an earlier bus to Burgos, thus avoiding more “waiting in the airport” time. The woman at the counter looked at my tickets, and huffed and puffed, and told me since I had used PayPal to pay for them, there was absolutely NO WAY they could be changed. Ever. EVER. Period.

Not taking this personal, I commented that the only way to purchase tickets from the US is through PayPal, since our bank servers are not as secure as in Europe, and therefore we cannot use our own credit cards. Apparently PayPal offers enough transactional security.  (Who knew?)

Huff and puff. What? The woman at the counter says “Anyways, these tickets are for the 15th of May, and today is the 13th.” WHAAAAT? “You need to travel today?” “Yes.”  Click click click on the keyboard of her computer. She takes my stack of tickets and crosses out May 15, and writes in May 13, then seals the deal with an official stamp from the company. “There’s room on the bus today.  You are all set.”

Surprisingly, the bus was our most comfortable mode of transit, and the bus driver was wrong – there was plenty of room for my walking sticks and book bag! (It’s not personal, just cultural!) Although many heads were seen bobbing in and out of sleep, most students did wake up often enough to see the wind farms dotting the countryside as we journeyed north.

This appears to be a fantastic group of students, not at all grumpy while dragging their own luggage into town. Even more telling – when given three hours of free time before class would meet in Burgos, not one student took a nap! In a country that venerates the nap! Instead they changed, showered, and hit the streets, anxious to discover more about the medieval city of Burgos.

Yesterday students were out interviewing pilgrims, who they have learned to identify either by their clothing (practical pants) or shoes (galumpy walking boots or open sandals to let the toes breath even though it is COLD). They are learning to use me as an excuse to ask just about any question – “My teacher is making me ask this!”  They have discovered bargain meals, as well as the fact that you need to signal the waiter to get his attention, both to order as well as to get the bill. Finally, they have learned that they need to walk slower to blend in. Not a single student has commented on the bidets, but I expect that will happen eventually…

Today’s conversations are more challenging – the state of the monarchy, after suffering numerous public relations foibles; the economic crisis; the independence movement in Cataluña. The students will also be observing and describing different areas of the Cathedral, as well as visiting other churches in smaller groups. Finally, they will be setting individual, short-term goals that look to take their individual interests and relate them to the host country.

We meet up later today at the old castle high above the city, offering a spectacular view down onto Burgos.  After interviewing people in the streets. After the midday meal around 2, the heaviest meal of the day. And maybe after a siesta, too!