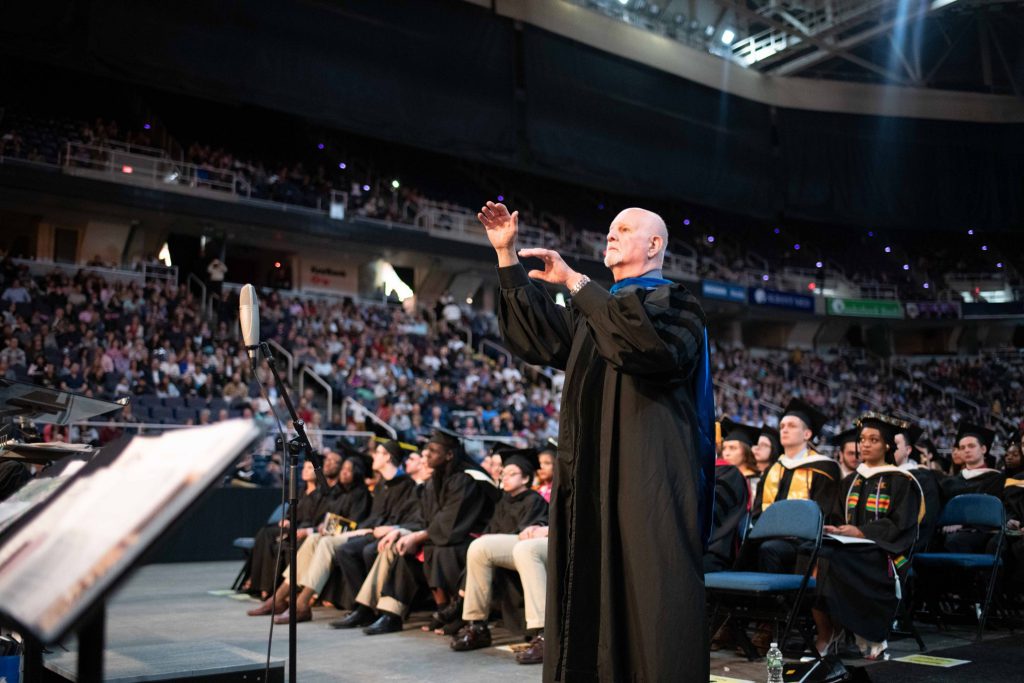 Saturday’s commencement, the 96th annual for Saint Rose, was the 21st and final for Professor Michael Levi, conductor of the Saint Rose Chamber Choir, who is retiring.

Levi has guided hundreds of singers to become educators, performers, promoters, publishers, and producers of music. Colleagues praised his support of his students, and his musicianship. They said that he established a culture of belonging.

“I can’t count how many times I’ve gotten a message from Michael with a piece of beautiful music or a funny joke on a stressful day that made me feel so much better,” said Assistant Professor Suna Gunther, coordinator of voice.

A Bronx native, Levi earned his Ph.D. from the University of Buffalo. He joined the Saint Rose faculty after 30 years of teaching public school. He has published 25 choral pieces he wrote or arranged.

A few days before retiring his baton, we spoke to Levi, as a colleague in a nearby office practiced piano and another warmed up his singing voice. Here, he weighs in on failing, shy students, and his own singing voice:

On the importance of second tries:

My first college experience was at Hunter College in New York. I was a business major, and I flunked out after a year.

I wasn’t ready for college. I was playing baseball, I was with a girlfriend. I didn’t go to class. After I flunked out my father said “Why are you majoring in business? You should major in music.”

So I went back to Hunter, non-matriculating, and took classes three or four nights a week in music theory and really enjoyed it. I did well enough to get in to (State University of New York at) Fredonia.

I’d been playing piano since I was 8 and playing in bands at 13. I always figured it would be an avocation, something I’d do while working in  business. At the time, I thought a career in music was not practical.

Now, when I see students who are struggling, I try to help them. I explain that they can have a very successful music career, and they should study what they love. 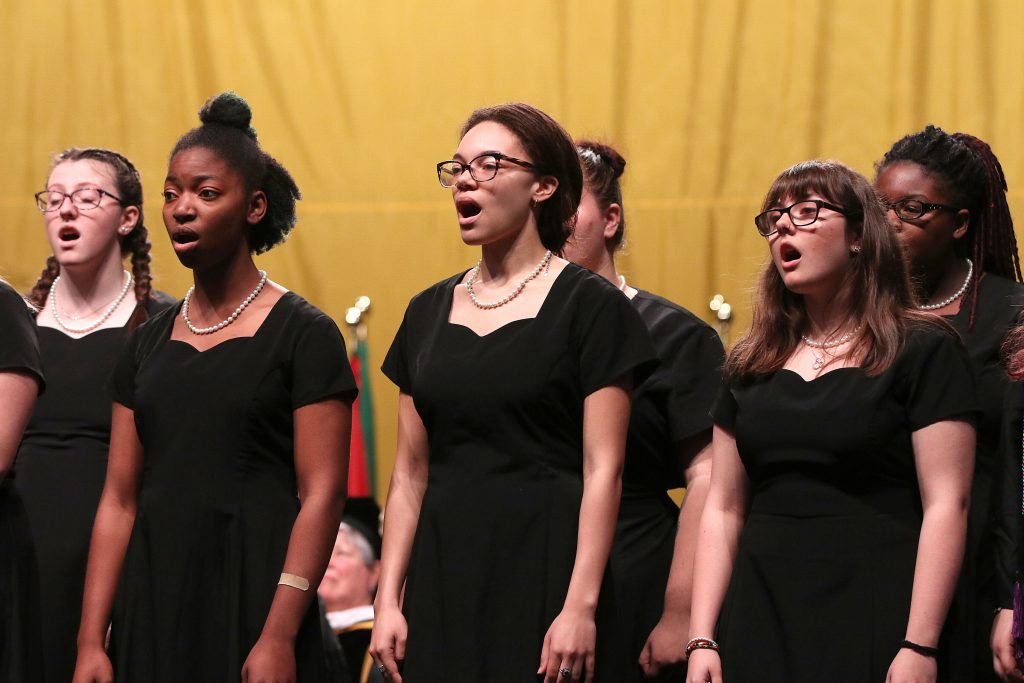 On the importance of high school:

My background in public school teaching has been a great help in higher education.

I learned to address different learning styles. You have kids come in who have dyslexia, other types of learning disabilities, need visual reinforcement, extra time, or work better in groups.

On why singing is a great way to spend a college career:

It’s the only instrument created by God. If you have a voice, you’ve been given a talent, and you should develop it the best you can.

On his own singing voice:

I have a great “congregational,” rather than solo, voice. I have studied voice, but I was a piano major.

On music at Saint Rose:

When I came here, there were 80 music students, now there are 220.  The musicianship has grown substantially.

We don’t encourage competition among students. A lot of other music schools do. It creates an atmosphere of mistrust. We have very few problems with divas or egos. Our students understand that to sing or play in an ensemble, you have to give up some of yourself for the good of the group. The end product is better, and we are better as human beings.

I like taking shy kids and bringing them out. I had a girl who recently transferred here, and she was miserable. I asked some of the other kids to go out for coffee with her. She learned that there is a unique, welcoming culture here. 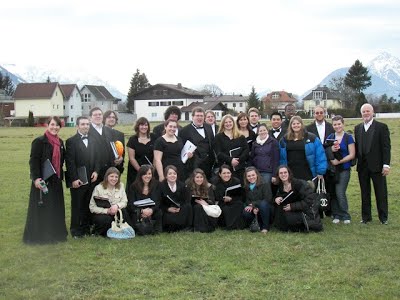 On conducting in other countries:

We’ve taken seven trips, to England, Ireland, Austria, and France. I’d say probably half the students had never been outside the U.S., and maybe half had never been on a plane before. There were kids who were afraid to fly, and I’d say “Let’s sit in the center.”

I went ahead of time to set it up. In Austria, we located a cathedral. We went to the kapellmeister (head of music), and he said, “We don’t usually let other choirs in.” I played him a recording or our choir, and he said “OK, what time do you want?”

On traditions and tweaks:

One of the traditions I established was to have the College choir choose a signature piece for all members throughout the years. They chose Bob Chillcott’s arrangement of “Gift to be Simple.” We end every concert with this piece and invite any alumni present to come up and sing it with us. It gives us an identity and it’s geographic since we’re near the Shakers. 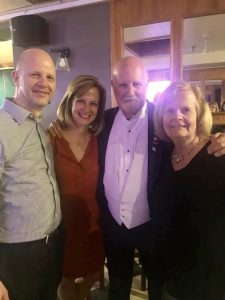 For commencement, I began a tradition of letting the choir pick the song. If there are enough seniors, they pick it. This year they picked an old American hymn, “Abide With Me.” They’ve also picked “Toward the Light,” a piece that a student wrote for her senior project.

But not too many tweaks:

We still end every concert with “Gift to be Simple.”

At my last concert, when we were doing “Gift to be Simple,” and I asked for alumni to come to the stage, it was mobbed with students I’d taught. And I saw familiar faces in the audience from when I taught high school. A couple of kids were in their 60s.

My wife and my daughter planned it. A lot of former students from Williamsville High School and Saint Rose came specially. It was really overwhelming.

On what he will miss:

My colleagues, students, and making music. 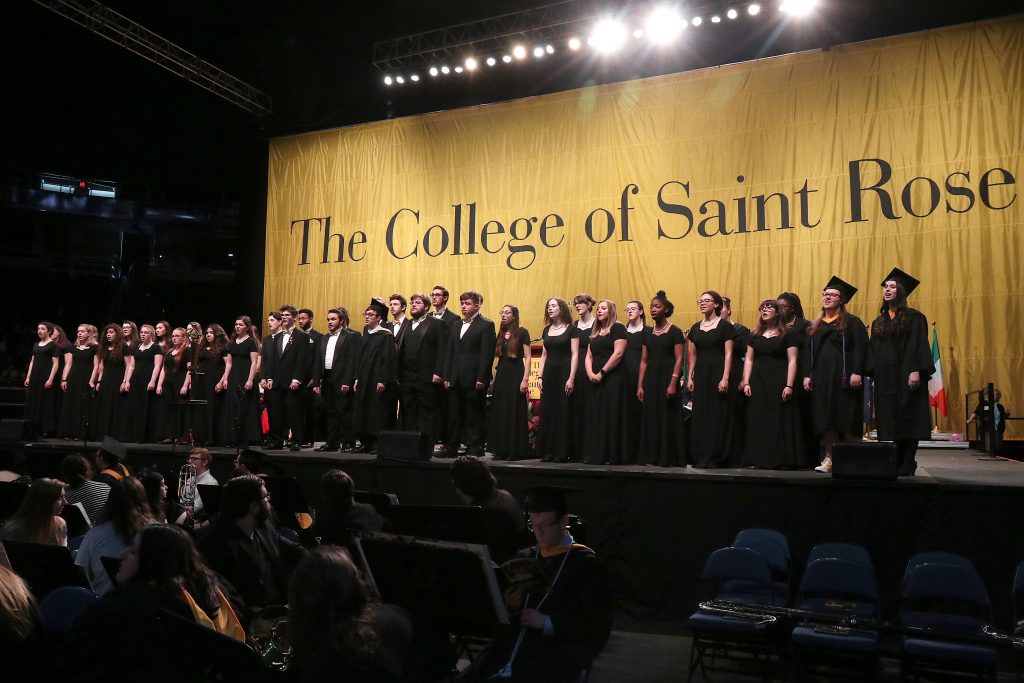