by Oren Rasowsky on August 22, 2013 in International, The College of Saint Rose · 1 Comment

Torre Diana is not expected to be complete for at least two more years, but French architect, Jean Michele and Reichmann´s Development Team, have already begun planning and detailing the building´s main entrance, which will be located in Mexico City on Rio Mississippi.  This morning, Reichmann hosted a small California-based design firm, which builds fountains of all shapes and sizes.  Reichmann has plans to build a majestic fountain just outside the building´s ´planta baja´.

What the finished product should look like in 2016. (Photo Credit: Jean Michele)

The California-based company has many famous projects throughout the United States, most notably in Las Vegas, and hopes to make an international impact with this prospective project in Mexico.  The company initially pitched three separate design ideas to Reichmann through a PowerPoint presentation, which included fountain sketches and simulations.  The three featured designs included the following: Fan Style, Arch Style, Geyser Style. It is crucial to Rick Ricker, Reichmann´s Director General, not so much to build a piece of art, but instead a place for people to gather and congregate during lunches and/or breaks.  Ricker believes it´s imperative for the design to emulate that of The Canary Wharf.  The Canary Wharf is a Reichmann project just outside London that is centered around a beautiful fountain.  The fountain´s design contains green gardens, gentle waterfalls, and a pleasant experience for those passing by. 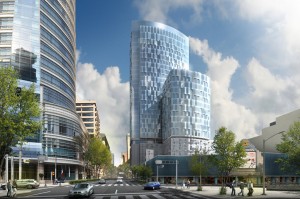 ¨The thought process behind constructing a fountain must be very long-term¨, Ricker explained.  The building will hopefully stand for upwards of 100+ years, and it is essential to build a fountain that people can relate to without losing interest as time passes.  Since the weather in Mexico City is decent almost all year round, Torre Diana´s tenants and pedestrians along Rio Mississippi will gain lots of enjoyment from a fountain that can be used as a relaxing place to chat, grab lunch, or just relax.  After the meeting concluded, it was made clear that the current design offerings would need to be tailored in a way that could physically entertain as well as emotionally engage an audience.  The communication in this meeting was key as it allowed the California-based firm to listen, learn and receive feedback from Reichmann´s developers. 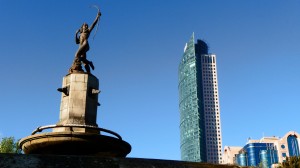 ← Good to know: hard work in the pool and in the classroom net Saint Rose swimmer Caitlin Brauer national award
My Last First Day of Fall Semester at Strose →